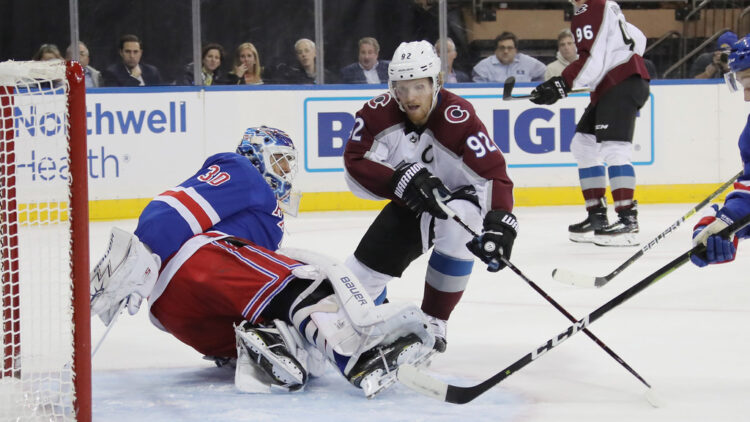 Over the past couple of months, the Rangers really haven’t been linked to anyone other than Jack Eichel. However, the reality is Eichel is a stretch pass at best. The Kings have more of a need for a star player than the Rangers do, plus they have more trade pieces. The cost for Eichel is also likely to be cupboard robbing, which seems to fly in the face of the Rangers youth hoarding strategy. Instead, if the Rangers are really going to explore the trade market, I’d take a long look at Gabriel Landeskog in Colorado, if the Avs decide they can’t re-sign him.

Just a quick note, Landeskog mostly plays left wing, but has played center in the past and takes hundreds of faceoffs every season to great success.

Landeskog is a 28-year-old that has put up over 0.7 points per game for each of the past four seasons. He has also cracked 20+ goals in 7 of his 9 past seasons and has produced almost a point per game in the playoffs (39 career games).

Keep in mind, all of these figures are better than Mika Zibanejad’s.

Landeskog is in the last season of a 7-year contract ($5.5M AAV). He’s arguably been one of the better discounts in the league over the past few seasons.

Similar to what Dave wrote about Tomas Hertl the other day, Landeskog won’t be nearly as expensive as Eichel. You are probably looking at a similar deal to what the Yotes paid for Taylor Hall last year, so effectively Morgan Barron and Zac Jones. Or maybe since the Avs are currently in a playoff spot, you’re sending Strome the other way with a high pick and/or prospect.

Either way, Gorton is going to want to lock in a contract extension with Landeskog prior to pulling the trigger.

Gabriel Landeskog isn’t going to get Eichel money ($10M AAV), which benefits the Rangers, but he isn’t going to be cheap either. You’re probably looking at a $7.5M AAV over 6 years give or take. This is essentially what Matt Duchene and Ryan Johansen got, who are around the same age and production.

To be fair, the Avalanche are not the Rangers. They are a more aggressive team and play at a much quicker pace. You will not see that team go D-to-D back to D on very many breakouts or regroups. Colorado’s coach, Jared Bednar, prefers wheels and quick-up style breakouts with a lot of rushing the opponent’s blueline.

The Rangers try to play that way, but they have neither the speed nor the depth to execute that style consistently. So, the implication here is that Landeskog would likely take some time to transition from two different styles of offense.

Tactics aside, there also isn’t going to be room for both Landeskog and Zibanejad on this roster next season. Essentially, the former is replacing the latter. So, if the Rangers were to acquire Landeskog, that likely means Zibanejad gets dealt. Not something I’m opposed to given Mika’s struggles, but worth mentioning if you think he’ll bounce back in a major way next year.

At the end of the day, this isn’t a trade the Rangers need to make at this juncture. They aren’t making the playoffs and next season likely won’t be in contention to win the Cup. However, the cupboard is bare at the center position. Even if Zibanejad bounces back, he could walk next summer.

While trading for a Hertl or a Gabriel Landeskog might seem like a stretch for the Rangers, these armchair proposals are really the only way to fill the most critical hole on this roster. At some point, whether it’s this season, the summer, or next season, Jeff Gorton is going to have to make a move.

As a side note. I would just like to give a stick tap to long-time Blue Seat Blogs commenter Walt (Walter Florio). It’s come to our attention (h/t MjrMisconduct for the intel) that he passed away this past January at the age of 74. Guy bled Rangers blue as much as anyone around here. You’re still my boy blue! RIP.

A donation has been made to St. Jude’s Hospital, per Walt’s wishes, on behalf of the BSB community.