Revisiting the NY Rangers five keys to a success in 2021 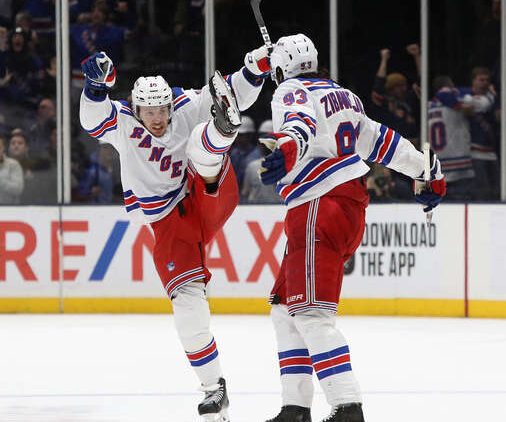 With half of the season now behind us, the Rangers are sitting in sixth place in a brutal East Division. They are hovering around .500, with no real signs of consistent play coming any time soon.  Just before the season started, we went through our five keys to success in the 2021 season for the NY Rangers. Now is a good time to check back to see how the Rangers have done, and why we are seeing the results we are seeing.

1. No regression from top players – Fail

Artemi Panarin, Mika Zibanejad, Tony DeAngelo, and Ryan Strome all had career seasons last year. In order for the Rangers to be successful, they needed to stay within that production. This clearly did not happen.

Strome and Panarin have been pulling their weight, with Strome actually improving upon his overall production from last season. However Panarin missed two weeks due to impossible to predict scenarios. Zibanejad is having an atrocious season, but he is turning it around. DeAngelo was fired into the sun. That’s only half of the top players building upon those career seasons.

Chris Kreider has picked up the slack with his hot goal scoring run. Pavel Buchnevich is producing at a little under a point per game. But that’s not enough.

This was the most important of the keys to success in 2021 for the NY Rangers, and it’s a big whiff.

The Rangers needed production from Alexis Lafreniere, K’Andre Miller, and Igor Shesterkin. While all three are having good seasons, they aren’t enough for the Rangers to make noise in the East. Don’t misinterpret that – this is not saying they are having bad years. They just aren’t the lights out years needed to make a run this season. That’s fine.

Shesterkin has missed two weeks due to injury, but was shaky until he was finally given a normal workload. The alternating goalie approach didn’t work, but Shesterkin is the clear #1. That’s progress and that bodes well for next season.

Lafreniere had no preseason or camp to adjust. He had a bit of a rough January, but he’s been great lately. What is missing is the points on the scoreboard. That will come, but the scoring issues are up and down the Rangers lineup.

Miller had a strong start, but has struggled with some inconsistency as well. He’s a bonafide NHLer, but rookie struggles are going to happen.

3. Continued progression from the kids – Pass

The kids of mention here were Ryan Lindgren, Adam Fox, Filip Chytil, and Kaapo Kakko. All four have looked exceptional this year. With the one caveat that no one is scoring. Fox is the leading scorer of the bunch, with Lindgren next in raw point totals. Chytil did miss a bunch of time though, and his scoring pace is ahead of Lindgren’s.

The constant brought up is Kakko’s scoring. He’s another guy that just can’t buy a goal. The good news is that his overall play is miles better than last year. He’s a kid that uses his body to shield the puck and generate offense. As he continues to put on muscle and learn the pro game, he will improve. Remember that Aleksander Barkov started slow too.

Objectively, this has been a collective fail from everyone in the organization. It was clear from the start of the season that Shesterkin was the better netminder, but David Quinn rotated his goalies. Neither got into a rhythm, and it was a negative impact on the ice. Just as Shesterkin was getting the bulk of the starts, he almost blew out his groin.

Now it’s on Alex Georgiev, who has been brutal. Keith Kinkaid has been a nice story with the shutout, but expecting him to be more than a backup’s backup is unfair. Until Shesterkin comes back, this is going to be an issue.

This may have been a little unfair, as the Rangers didn’t have the cap space to make any recalls. Only Tarmo Reunanen has received a call up, and that was yesterday for one game. The Rangers just finally got the cap space to recall Morgan Barron, but he’s been a winger in Hartford, and the Rangers don’t need winger help.

The only AHL kid to take a spot was Libor Hajek, and that didn’t work out too well. I’m giving the Rangers a mulligan on this one, since cap space really did limit them.

That’s a pair of fails, a barely pass, a pass, and an incomplete. The NY Rangers needed all five of their keys to hit for success in 2021. Suffice it to say, they didn’t get there yet.

This season has been cursed for the Rangers. They haven’t dressed a fully healthy roster since the first week of the season. They’ve had long-term injuries, short term tweaks, and everything in between. COVID protocol has cost them multiple games from some of their top players. And that’s just the stuff we could predict.

We could not predict DeAngelo fighting with Georgiev and getting thrown off the team. We couldn’t predict a Russian hit piece on Panarin, forcing him to take a leave of absence. Both of those were significant holes that could not be filled. The DeAngelo incident has led to significant ice time for Hajek and Jack Johnson. Not exactly ideal.

It was never about the 2021 season, but about the 2021-2022 season. The results have been lacking because of the myriad of issues surrounding this team. However the process, specifically on defense, has been great. The pieces should come together next season. That’s the good thing.