Rangers Weekly Preview: Which team will show up this week? 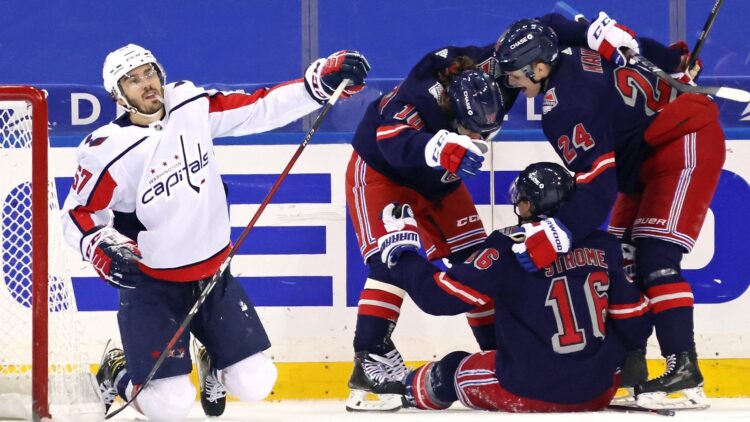 Nearly halfway through the season, the 2021 NY Rangers are, to put it mildly, inconsistent. Their play doesn’t vary along the margins, either. They seem to be either completely dominant (Saturday afternoon in Boston) or totally disengaged (Thursday night in Boston). In trying to figure out why this may be the case, it’s often best to refer to Occam’s Razor. Occam’s Razor states that the simplest explanation is usually the right one.

I bet you thought I was going to bring up the coach.

While I have my qualms with David Quinn, I think he’s generally done a decent job with the Rangers. His in-game shortcomings are offset by his approach to developing what is the youngest roster in the league. Look no further than Pavel Buchnevich, who has become a complete player and a suddenly indispensable top six forward. Ryan Lindgren is another example. He is vastly outperforming his draft potential, and there is mounting evidence that he’s doing so independent of the fact that he’s Adam Fox’s defense partner.

I’m sure the comments will be lighting up with plenty of counter-arguments to these examples of Quinn’s success. My point is that I don’t think the Rangers’ mediocre record has much to do with coaching. The team’s underlying metrics have improved by leaps and bounds this season. Their expected goals rates tell us that they should have banked about two additional wins by this point in the season. Remember those games stolen by opposing goaltenders? There have been a few.

So again, the discussion comes back to the simplest explanation: youth (plus a little bit of bad luck).

According to Hockey Reference, the average age of an NHL team this season is 28.1 years old. The Rangers’ average age is 25.7, and that number is about to drop with the potential subtraction of Jack Johnson and the addition of Vitaly Kravtsov. There’s no magic metric that accounts for experience, but it probably explains why the Rangers have been unable to find consistency, especially in a year where their top players have been injured, absent, or simply not themselves.

As Dave likes to remind us, it was never about this season for the Rangers. They are an unfinished product with some major holes to fill at center and left defense. This offseason, the Rangers will be in a position to seriously upgrade their roster through free agency and trades. And so even though it’s fun to dream of a team like the Rangers arriving a year early and making a Cinderella playoff run, 2021 is really about continued talent development and player evaluation.

The Rangers currently have a 17% chance to make the playoffs, according to Moneypuck.com. Let’s see if they can make this season interesting as we start the second half.

The Rangers hit the halfway point of this season with a double-header at home vs. Philadelphia. Like the inconsistent NY Rangers, the Flyers are also currently on the outside of the playoff picture. When we last previewed the Flyers, they were allowing scoring chances at a high rate and giving up goals in bunches.

That trend has reversed lately, and the Flyers are playing sound two way hockey. They’re surprisingly in the middle of the pack in terms of expected goals for and against, and they profile similarly to the Rangers. It seems as though low-event, defensive battles are becoming the hallmark of the East Division, so expect two of those at the Garden this week.

The Capitals are 8-1-1 in their last ten games and have asserted themselves – along with the Islanders – as the class of the division. For some reason though, the inconsistent NY Rangers seem to match up well with the Caps. They’re 2-0 against them this year, and both wins came in extremely impressive fashion. Until Saturday’s 4-0 shutout of Boston, the Rangers’ most complete game of the year was their 4-1 win in Washington a couple of weeks ago.

If the Rangers are going to make a push this season, they’re going to have to string together good performances and start getting bounces (not to mention a few saves). Anything less than six out of eight possible points this week probably won’t improve their playoff odds, and a bad week probably buries the Rangers for good. Crazy to think that the games are already that important this early, but such is life in a 56-game season.