With Kaapo Kakko set to return to the lineup today, it looks like Colin Blackwell will be the healthy scratch. Having Kappo back is certainly great, and the Ranger sorely need him back. However scratching Colin Blackwell is certainly a puzzling move. Blackwell has been widely regarded as one of the more consistent Rangers forwards. Plus, there are other forwards who have been far worse.

Most of the focus has been on Brett Howden. Listen, we know he’s not good. But I certainly understand David Quinn’s logic. Howden is a center, and Filip Chytil isn’t taking faceoffs just yet. On paper, I get it. Fine. Blackwell can play center, but is better on the wing.

But what about Phil Di Giuseppe? Is there a reason why Blackwell was scratched over him? And this isn’t a slight against Di Giuseppe. It’s a compliment to Blackwell, who has been excellent.

Aside from faceoffs, one of the prominent discussion points has been that Howden kills penalties. The Rangers have one of the top penalty kills in the league, so why mess with a good thing? Also Howden has been primarily used in a defensive manner. That’s fine. So let’s dive deeper.

The last bit is a bit of sarcasm on my part, but the numbers don’t lie. Blackwell has the better defensive numbers across the board. Some of this is to be taken with a grain of salt, as Blackwell doesn’t have penalty kill time and has only taken nine faceoffs. Regardless, the numbers are better.

There’s a reason why the Rangers keep playing Howden. It’s very reminiscent of when the Rangers kept touting Neal Pionk. Is there something else coming with Howden? We don’t know. But given the incredibly long leash, it’s safe to assume Howden isn’t getting scratched any time soon.

This is where it gets interesting. Both are wingers, so there’s reason to compare the two. Blackwell is mostly a middle-six forward on the Rangers, while Di Giuseppe has been more a bottom-six winger. 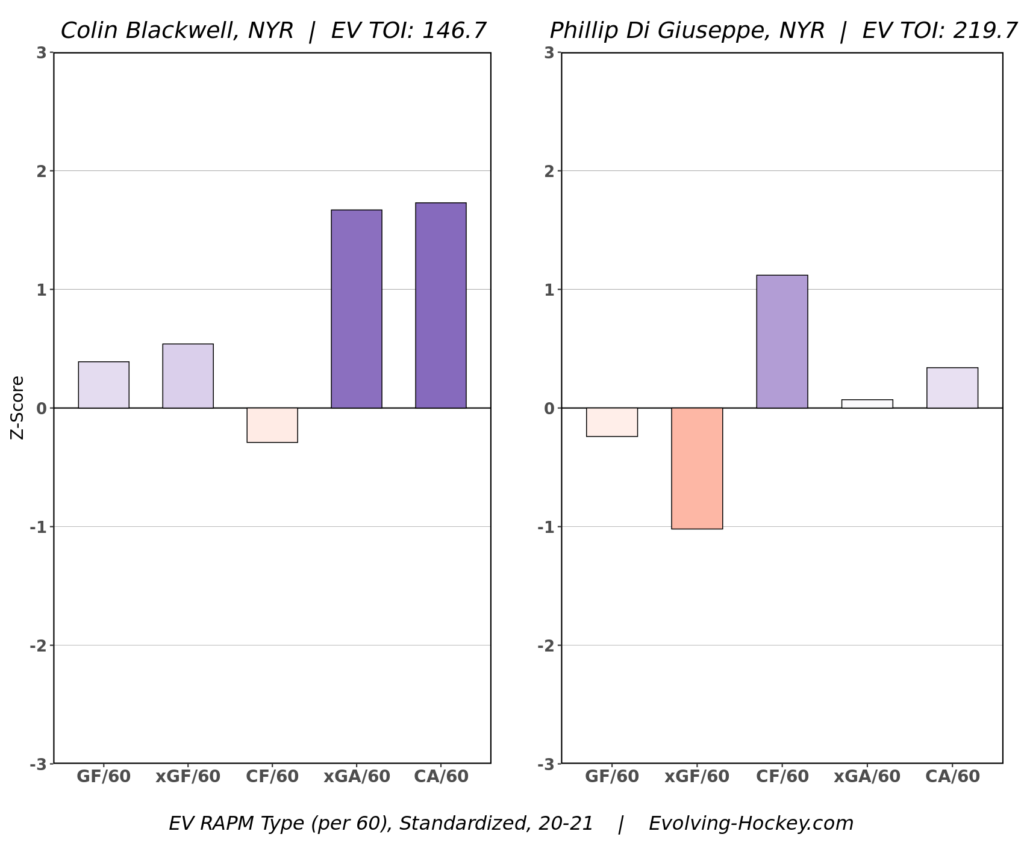 On paper, Blackwell is certainly better, and he’s been much more visible on the ice. There are some differences though, which need to be taken into account. PDG has played mostly with Howden and Kakko. While Blackwell has spent most of his time with Howden and Kevin Rooney. PDG certainly has the benefit of playing with Kakko, but Blackwell has had decent minutes with Ryan Strome and Alexis Lafreniere. PDG doesn’t have that.

The “role” factor is a bit of a misnomer, as Blackwell can play up and down the lineup. Given he’s already had significant minutes with Howden, keeping him on the fourth line with Howden and Brendan Lemieux isn’t that far fetched. No matter which way you slice it, Blackwell has been better.

Of course, PDG has been better than Howden. So there’s that as well.

Signs are pointing to Blackwell as the healthy scratch. He certainly does not deserve it. And on that note, neither does Di Giuseppe. But as long as Brett Howden is getting the long leash, it will be one or the other. Soon it may be both, as Artemi Panarin is going to be due back at some point soon.

Perhaps the best idea is a rotation between Howden, PDG, Blackwell, and perhaps Kevin Rooney as well. Or, given the Rangers luck lately, someone else will get hurt. Quite frankly, of that quartet, the best has been Blackwell, with Rooney right behind him. Unfortunately, the worst of the bunch is the one who is far behind the rest.

Update: And Phil Di Giuseppe is the healthy scratch. This post is relatively outdated now, but hey the point still stands. Thanks for listening to me, DQ.