To say Mika Zibanejad has had struggles this season would be an understatement. Coming off a pair of 70-point seasons, with last year being the best of his career, big things were expected from Zibanejad. It was unrealistic to expect him to repeat last year’s performance, but coming close to his 2018-2019 season wasn’t an unreasonable ask. As the Rangers 1C, his production and play drives the team. It hasn’t been there, and the Rangers are struggling. 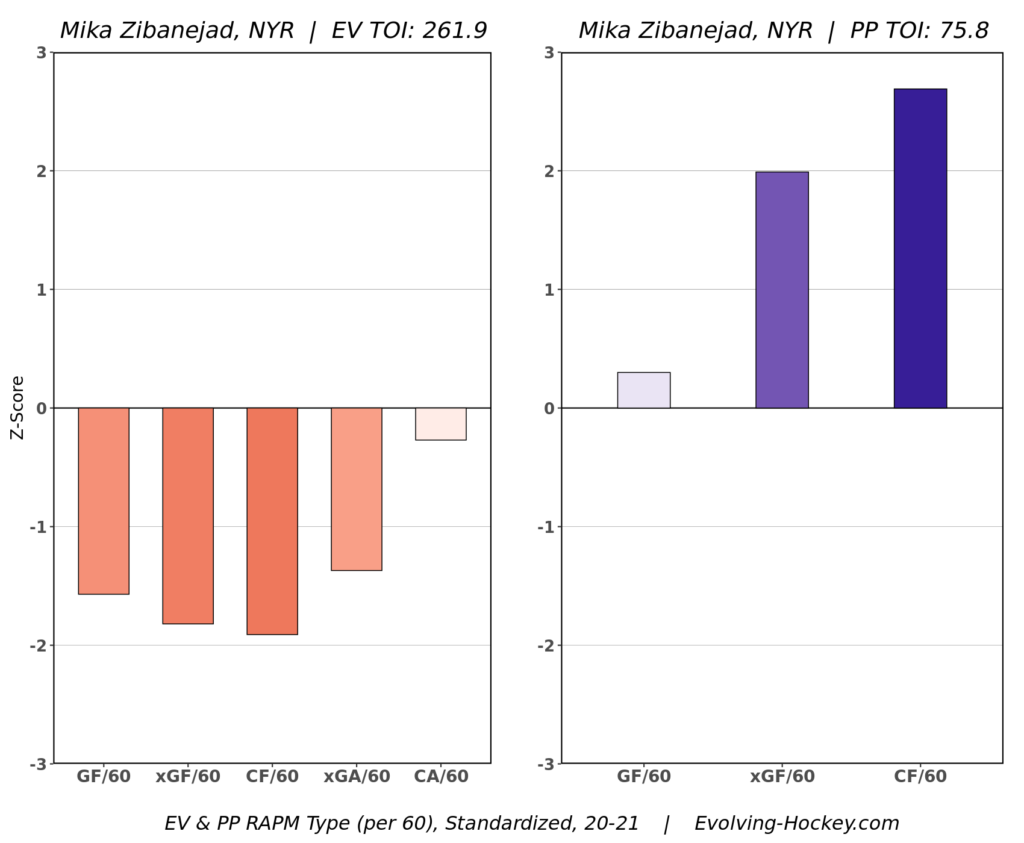 It’s not just Zibanejad’s lack of production, it’s his entire game. He’s an absolute train wreck at even strength. He’s had flashes of what he’s been, but the overall game is just bad. Zibanejad has one game in the last eight where he was over a 50% expected-goals share. We can reason away the production, but the lack of an actual game is a problem.

The consensus is that Zibanejad is still having lingering effects of COVID-19, which held him out of training camp. It’s widely known that COVID doesn’t just go away in some people. It has lingering, long-term effects that may be impacting Zibanejad to this day.

The reason why we all hope it’s lingering –and hopefully not permanent– COVID effects is that Zibanejad legitimately fell off a cliff. He went from one of the top centers in the game with a lethal powerplay presence to…Brett Howden? How does that happen overnight?

We all look at Zibanejad’s flashes and hope he’s turning the corner. The assist and forecheck on Tuesday are two prime examples. But then, just like those flashes, Zibanejad disappears and looks lost.

But…What if it’s not?

This is by far the worst case scenario for the Rangers. What if Zibanejad isn’t just experiencing some lingering COVID effects? What if he really does just fall off a cliff and not recover?

The Rangers are banking, at least for now, on Zibanejad being the 1C of the present and the future. Continued struggles, both this season and next, put the Rangers in a precarious position. They have no center depth at all. And unfortunately for the Rangers, the best chance to address this is this offseason. Be it with a potential Jack Eichel trade or signing Ryan Nugent-Hopkins.

Mika Zibanejad’s struggles are hopefully just a blip, but for a guy slated to get $9+ million on his next deal, this is a pretty big blip. This is also not something the Rangers expected to happen. They already had a difficult decision with his next contract, when Zibanejad will already be 29 and looking for a long term deal. Now with his struggles, it makes the decision that much more difficult.

Or does it make the decision that much easier?