The Rangers history since the start of the shot-location era (2007-08) is pretty much split in thirds in terms of 5v5 on-ice play. Results-wise, only about 4 teams were widely agreed upon as actually good, and that ranged from October 2010 to June 2014. The league-average teams were a mix of Renney and Vigneault years, while the first two years of David Quinn resulted in objectively bad results (albeit, they were expected). Yet despite the results this year, the NY Rangers trends show they might be better than their record.

While expectations for the Rangers ranged from the team-speak of playoffs being “the goal,” to fans being optimistic or pessimistic, thus far the best surprise the team has delivered has been playing very well given the seemingly non-stop run of off-ice distractions and injuries. Even though it is only one metric, the Rangers are back into the top 10 of the league in terms of Expected Goals For % at 5v5, ranking 9th. For perspective, that is a playoff-team type of result. It would land between the 2013-14 and 2007-08 clubs with their current 52.03% rate at 5v5. 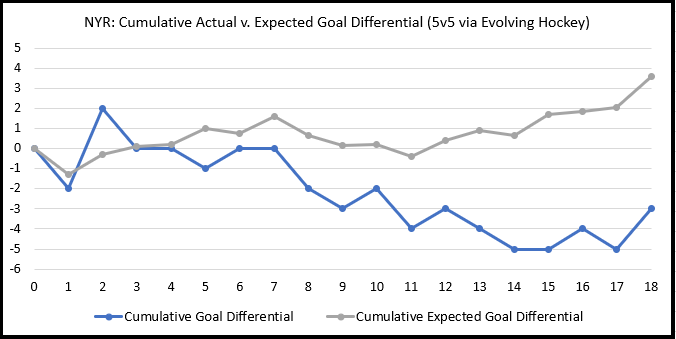 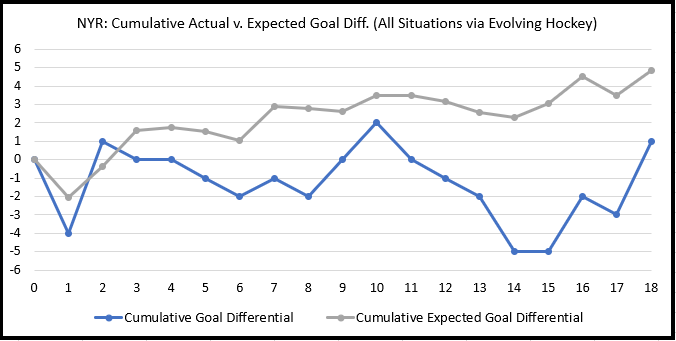 Naturally, the Rangers aren’t even in a playoff spot at the moment due to a down shooting year. That being said, it appears that likely hit a bottom in terms of a 10-game rolling average. This does not mean that they will shoot above average the rest of the way, though. But as you can see in the above charts, the All-Situations gap improved dramatically compared to about a week ago. Simply put, the Rangers should likely have 1-2 more wins banked in the standings based on their play.

The way they’ve played recently is nothing short of impressive given some of the lineups they’ve had to ice. They’ve continued to be an average NHL defense as a team in terms of limiting quality chances against, which is night and day compared to the last two seasons. They’re struggling with shot attempts against (which is a proxy for possession – more shot attempts against means the team is in its own zone more), so that is something to keep an eye as Corsi & Expected Goals are correlated to about an 80% rate. The offense, however, is leading the way despite significant personnel being missing. The Rangers have been playing like one of the best teams in the league the last two weeks, so they fully deserved that win against Boston on Friday night.

Let’s take a look at the results of the forwards as of late. Game Control is something I like to put together as it combines Corsi & Expected goal percentages to see who is getting both good shot quantity and quality results (100 being average, aka 50% + 50%). This is admittedly a statistical no-no, but it can still work for a top-level overview of who is performing and who is struggling. 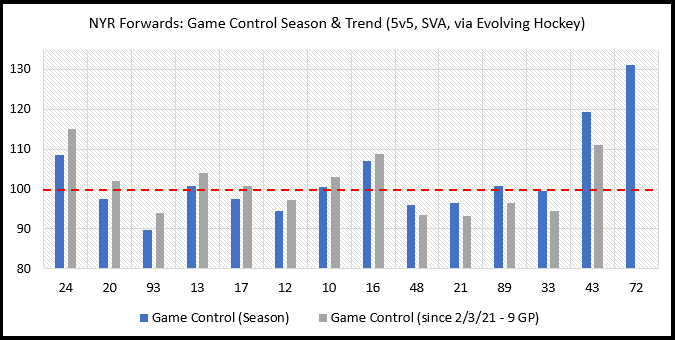 The above chart is sorted left to right by the difference between their Season-level Game Control. Meaning those who are getting better shot quantity and quality results as of late are on the left side, and those whose figures have decreased are on the right.

Eight of the 13 forwards have seen an improvement in their Game Control figure since 2/3 (my last trends blog). Kaapo Kakko leads the way. And I think even those who aren’t versed in analytics would agree he has continued to have a very solid season (point totals be damned). Other notables: Chris Kreider has woken up. Alexis Lafrenière is grading out as above-average as a teenage rookie – which is extremely important for his development. Finally, Kevin Rooney has stepped in with Chytil out to provide some good offense.

A brief note on Mika Zibanejad: This season is confounding in to analyze him. His results so far are the worst since his rookie season and it’s his lack of offensive creation & impact that is driving it (his defense has actually been fine/average). For me, this means two takeaways. First, it could very well be an outlier where subjective reasons (COVID and/or other) could help explain it. Second, the Rangers brass absolutely needs to be thinking about the long term if this play continues. That is not to say he should be moved this upcoming summer. But for a player who could very well get a raise to the $7-9 million-dollar cap hit range, Jeff Gorton should be thinking back to his own Brassard decision that netted the Rangers Zibanejad. Let’s just hope this ends up being a 20 game extremely bad sample, in the end.

Final forward notes: Ryan Strome has been playing great (inching towards sell-high territory, something to watch for). The hype around the impending return of Chytil is very real. Colin Blackwell continues to make the rest of the NHL look very dumb for passing on him. Also, Brett Howden should be sent to the AHL yesterday. 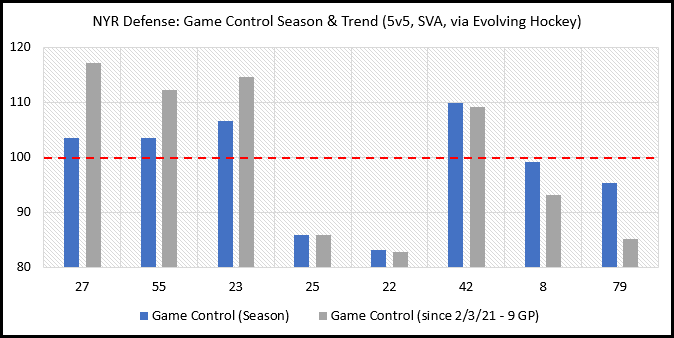 Look, I try to call them like I see them, both the good and the bad. I never thought I’d write this, but Jack Johnson has actually been good in his return to the lineup. Furthermore, Brendan Smith continues his revival season under Jacques Martin and is showing just how misused he was by Lindy Ruff. Last and quite not the least, Lindgren & Fox have been almost dominant together.

Now for the bad. Anthony Bitetto is a fun hometown-player story, but he should continue to be out of the lineup until (if or when) Jack Johnson shows his true colors. Libor Hajek has not been good and is the defense’s answer to Brett Howden – send him to the AHL and prove he can play there first.

Finally, Miller-Trouba shout NOT be reunited once Trouba is healthy. Trouba, for the hundredth time, does best with an effective shut-down type as his partner. For me, this means Lindgren or Smith at a TOI/pairing level of your choice depending on the partner. I think Miller-Fox could be scary good. 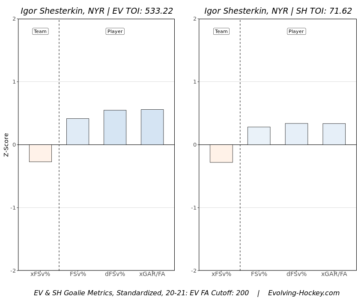 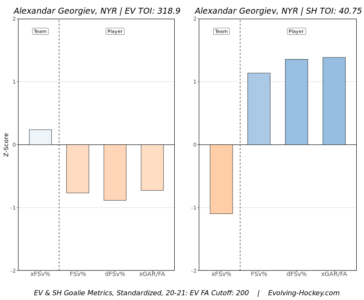 This will be short and sweet. Igor Shesterkin is starting to get the Lundqivst treatment. The defense in front of him has not been as good as when Georgiev is in the net. That said, he continues to perform at an above-average to good level and should be considered the #1 moving forward.

Georgiev, meanwhile, has struggled at even strength but has made up for it while on the penalty kill. Given that even strength play is 80-85% of a season and special teams results sway dramatically year-over-year, Georigev is an ok option to continue to back-up The Prince.

As for what is to come for the Rangers, let’s hope for more of the same but with some small lineup tweaks. Assuming Panarin will return and Chtyil will be playing very soon, Brett Howden’s endless leash should finally be pulled back all the way to Hartford. To be clear: saying Brett Howden is a bad NHL player at this juncture does not mean he may not be become an useful NHL player in the future. That being said, it should be extremely obvious that he is not playing the same game as Kaapo Kakko, Alexis Lafrenière, and K’Andre Miller. Regardless of a young players pedigree coming into the league, you want to see them be somewhere around average in terms of on-ice results early on, as this can be an indicator that once they get up to speed they will turn into a positive-impact player. Howden has been very, very far from that – and he should have to prove he can play well at the AHL level before the Rangers even consider bringing him back for 2021-22.

The only other change, assuming no other new injuries or attempted political blackmailing’s, would be related to when Trouba begins to work towards a return. As I alluded above, I do not think Miller & Trouba should not be paired any longer (which means that will happen at the first possible chance of course). I would lay it out like this:

I firmly believe Miller can handle high minutes because a) he’s already done so a bit and b) he is clearly a part of the young NHL generation that is the best class of skaters yet. Trouba needs cover for when he takes his chances, and Lindgren can provide that. As for who should be paired with Smith: I’d like to see an AHL option tried ASAP or at least at some point this spring.

Look, that is a lot of words for a Sunday.

TL;DR: The Rangers are playing well with some key players missing. If these trends continue with an average defensive performance, I’m relatively confident that the NY Rangers core can figure it out on the offensive side between now and the end of this calendar year. In the vein of continuous improvement, the Rangers must experiment with the known bad of their lineup (Howden, Hajek) this spring – especially if the down shooting year leads to a lack of points in the standings.