Alexis Lafreniere is not a bust; He will be just fine

There has been much digital ink spilled on the #1 overall pick and his two goals in 17 games this season. Some people (not smart people) are calling Alexis Lafreniere a bust. Others say he belongs in the AHL. But those who look at something other than a scoring line understand there’s more to this. Lafreniere is playing well. He, like most of the Rangers roster at the moment, is having a string of bad luck. However Alexis Lafreniere will be just fine.

We’ve seen Lafreniere’s shot and quick hands. His goal against Washington is not one that many are able to pull off.

When you watch Lafreniere play, the speed is evident. His quick first step provides separation, and he gets his shots off with a great release. Both were evident on his OT winner and first NHL goal against Buffalo.

Lafreniere hasn’t missed a beat when moved up to the first line either. He doesn’t drag down Mika Zibanejad, Chris Kreider, Artemi Panarin, or whichever linemate he plays with. If Alexis Lafreniere were a bust, we would have seen it when he was on the top line. 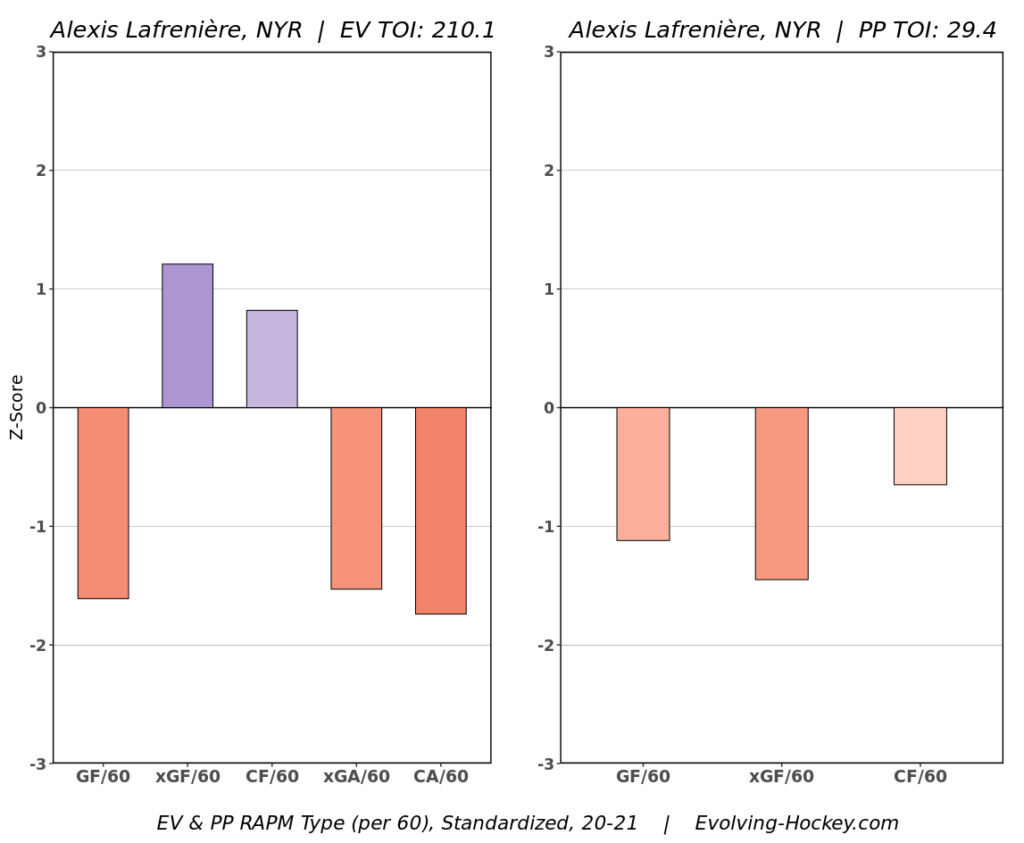 Lafreniere’s offensive skills are also on display in the smaller things he does. He generates quality and quantity when on the ice. If you’ll notice that first bar (GF/60) – the team just isn’t scoring, despite generating a ton of good chances. This isn’t unique to Lafreniere, it’s basically everyone on the team. 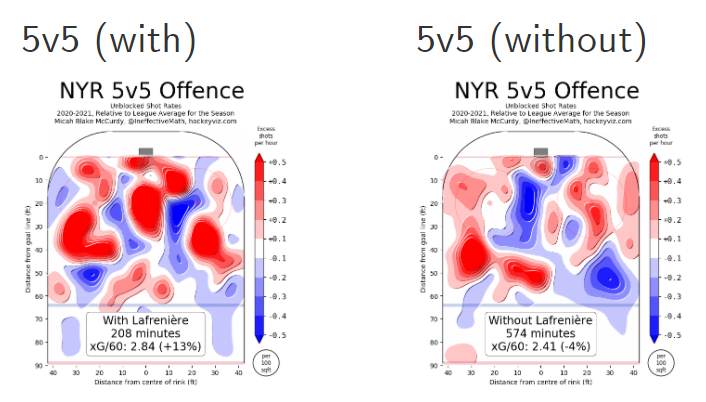 Bad shooting luck is almost everything with the Rangers right now, but especially Lafreniere. The Rangers have just a 2.61% shooting rate when Lafreniere is on the ice. That’s worst on the Rangers, and actually the second worst in the NHL. We’ve seen what Lafreniere can do. But if he’s generating all these chances, and we haven’t really seen spectacular saves against him (like Zibanejad), then something else is at play here.

Enter Lafreniere’s linemates. Or lack thereof. His linemates get brought up regularly, but it turns out they aren’t that bad, at least on paper. Lafreniere has spent the majority of his time with Ryan Strome (33% of the time) or Mika Zibanejad (28%) as his center. Of course there’s 25% Brett Howden as well.

For those who like math, that’s over 50% of his time with the most snake bitten player in history (Zibanejad) or one of the worst centers in the league (Howden). That might explain a little bit. If he’s generating chances for either of them, then neither will finish anyway. For those keeping count, that’s two goals between the pair of centers.

This is a sore point for almost everyone. Part of this can’t be blamed on David Quinn because of the injuries up front. Regardless, there’s something to be said for consistency, and the Rangers haven’t had any.

That’s four separate lines, almost with the same amount of ice time together. It’s very difficult for anyone to generate any consistency on the ice when his linemates change regularly.

The good thing is the consistent lines should work itself out soon. Filip Chytil is back at practice, and will presumably get back in the lineup this weekend or early next week. Kaapo Kakko won’t be on the COVID list forever, and that gives the Rangers their best line from the first few games. It’s a safe assumption that DQ will go back to that at least in the short term. Panarin’s leave of absence is expected to last two weeks, at which point the Rangers will be back to full strength up front.

Aside from that, there’s not much else to worry about. Alexis Lafreniere is playing just fine, and circumstances beyond his control are impacting his scoring line. When the Rangers get back to full strength and more skill is out on the ice, you’ll see these shooting percentages rise.

But it is worth noting this is a short season. It’s not a guarantee that all the shooting percentages rise to career averages, the way they should in a full season. With 30 fewer games, there might be some career lows in SH% across the board on the Rangers. As long as expectations are set, this shouldn’t be an issue.

Again, Alexis Lafreniere is not a bust. He belongs in the NHL. He’s playing well. Looking at just his scoring line is an incomplete analysis of his game. Just watching him on the ice, he belongs. There’s no need to worry.