Rangers get two in a row in post DeAngelo era 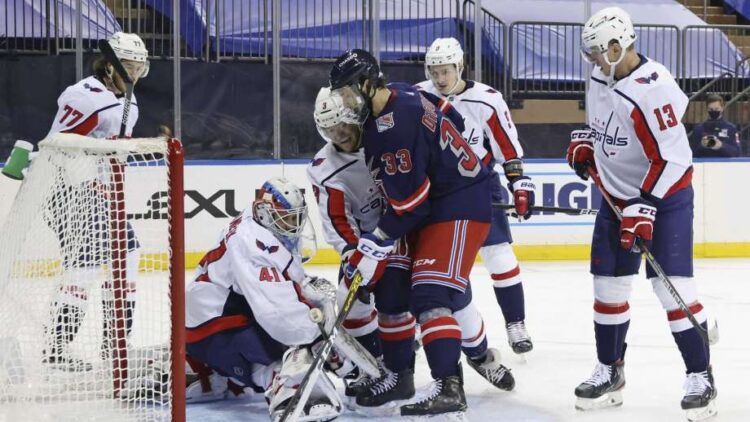 Couldn’t have asked for a better consecutive game this season. The first back-to-back wins on the season, the top six showed some fantastic puck movement, forechecking, and resilience. A few lucky bounces along the way from creating their own luck. Igor Shesterkin is the truth as well in goal, glad to see he just needed some reps to get into mid season form. He looks like the Igor from Russia we all were hyped about. Not to mention those glorious Liberty jersey’s finally getting some air time.   Let’s dive deeper into some of the game thoughts shall we? After all, the Rangers are undefeated in the post DeAngelo era.

The puck drops and almost immediately, the Rangers top two lines showed puck possession time and started exchanging some chances with the Capitals top lines. But the start we all wanted came to fruition as Kaapo Kakko worked down low below the net to forecheck the puck. He worked it around to Ryan Strome, who gave it to Artemi Panarin on the half-wall. Insert Adam Fox, who floated one in on net for a Strome deflection. We’ve all been dying for some consistency from the top six and that goal what the doctor ordered. So who won on the “Ryan Strome will get the first goal in the new Liberty jersey” bet?

That would be the only goal in the period, but not after a great flurry of chances halfway through the period from both teams top lines. Alex Ovechkin would go on to have 7 shots on goal during the night himself and score to become 7th all time in goal scoring passing Mike Gartner. Appreciate the greats while they are around. Even if they are your rival. Anyone else hoping he breaks Gretzky’s record?

The second period would produce one of the most ridiculous individual goals I’ve ever seen by Anthony Bitteto. He got the puck on the right circle, skated around the net while maintaining possession, skated in towards the slot from the left circle, dangled a couple of Caps, and tucked it back hand from the slot. Just an absolutely wild goal to witness.

Only the 3rd of his career. Not the first 6/7th defenseman for the Rangers to score a highlight reel goal against the Capitals whilst wearing the Liberty jersey either. What’s a Rangers game without a former Ranger scoring a goal, albeit a fluky one for Carl Hagelin? Shesterkin bobbled it with the glove and Hagelin knocked it in.

The third period would start off slow as by the 7 minute mark, both teams only had a shot on goal. That would change in an instant when Kakko would reach out and poke the puck along the boards, springing Strome for a 2-on-1 with Panarin. Strome would feed it across to Panarin who would fake and feed it right back to Strome for his second of the game putting the Rangers up 3-1.

The lead would quickly tighten as immediately off a face off, Ovechkin grabbed the puck off the face off, walk it into the slot, and rip it short side on Igor. Just no chance.

This period was also when the Caps were showing their own spurts of dominance as they would outshoot the Rangers. Igor held his ground though, and eventually the game would be sealed by a Pavel Buchnevich empty netter. Good team win. Great to see the top player starting to get some points. Let’s cook! The Rangers are 2-0 in the post DeAngelo era eh? Hmm.