It’s been just over a year since I last wrote a numbers-based trends blog on the Rangers. Back then, in a seemingly simpler world, the Rangers found their footing in the middle third of their season. Better team defense led to better results during that exceptional run.

Fast forward 356 days and the Rangers are actually getting similar trends, but are doing so in a different manner. This entire piece comes with the dreaded sample size warning, though. It can be put plainly that the Rangers are an average NHL team in terms of their on-ice results (especially given they’ve been quite – ahem – unique, off the ice) thus far. 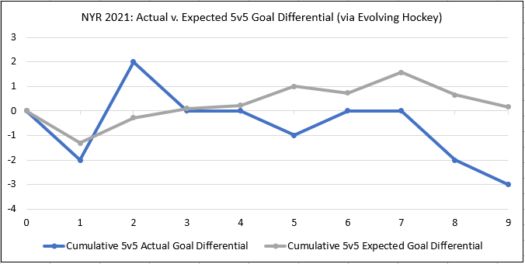 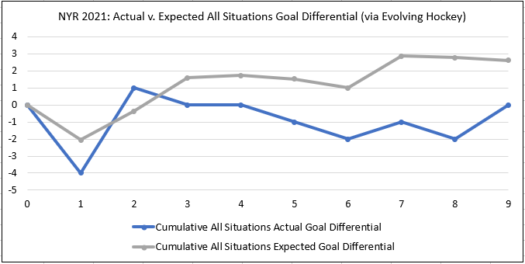 In fact, the only place where the Rangers don’t rank in the middle ten of the league for on-ice results is in shooting and save percentage. Which is a good segue to the above charts. On a macro level, the Rangers should have about 1 more standing point based on their expected goal rates at 5v5 and all situations. This is based on the widely accepted guideline that +3 in goal differential equals 1 point in the NHL standings.

The ~3-goal gap shown in the charts is due to a below average team shot and save percentage. If this continues one could argue the Rangers are getting unlucky, which is partially true. But let us not forget the many years of consistent top-10 goaltending that paired with some potent offensive units.

Early in a season I like to compare the ranks of the new season to the old. This helps gain some perspective on what the Rangers may be turning into. Naturally the improvement shown in terms of expected goals against per 60 minutes at 5v5 is very encouraging. While there is justifiable worry about David Quinn & Jacques Martin and their affinity for certain pairs or players (Jack Johnson being the main culprit here), if the Rangers were to remain an average NHL team in terms of xGA/60, it would set the offense up well long-term.

With that in mind, some slow starts on offense in the top six (notably Mika Zibanejad and Chris Kreider) have dragged on the Rangers xGF/60. We will see where this all goes, but overall I am not worried about the offensive talent finding their way in a shortened season. Expect the Rangers trends to get better here. 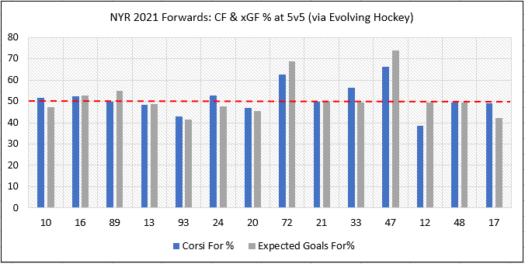 Note: Players ranked left to right in terms of TOI per game (high to low).

Speaking of the forwards; I’ll start with the good before the bad. Filip Chytil came out of the gates flying and has further put Ryan Strome on notice. Strome – who I’ve spent plenty of time advocating not to commit to – is actually playing just fine. His defensive results have so far been overtly better this year. Colin Blackwell has also been a breath of fresh air for the bottom six. He does have an ok history in the NHL in a small sample. Other honorable mentions who have played fine to well: Buchnevich, Lafrenière, Kakko, Di Giuseppe, Howden (yes, but trending down lately), and Lemieux.

The crux of the slow start up front lies with Zibanejad and Kreider. Mika has played well in 3 of his last 4, so hopefully any lingering effects from COVID-19 are beginning to dissipate. He still is well below his individual expected goal rate, though. Kreider’s start is likely linked to Zibanejad. Prior to Zibanejad, Kreider was usually centered by Kevin Hayes – a proven playmaker and play driver that he found good success with. Of the other centers Kreider has seen significant TOI with between Strome, Chytil, and David Desharnais, he has only seen positive shot & scoring chance success with Chytil. I think this speaks volumes that Kreider needs someone at center to help drive play with him in order to see the most success. 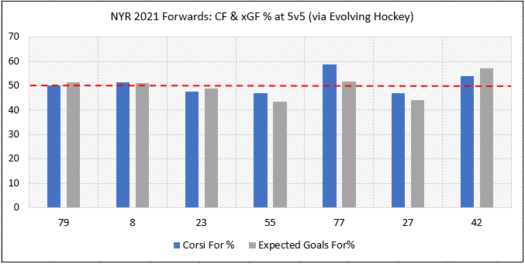 Note: Players ranked left to right in terms of TOI per game (high to low).

K’Andre Miller has given the Rangers some flexibility within the top four. For any rookie to come up average in shot & chance results is a good sign. While I’m skeptical Trouba is the best partner for him, the pair is working in a chaotic matter. This means they have high expected goal rates both for and against, jumping 30-50% when they’re on the ice together. Lindgren-Fox is also working but in the opposite way, with an overall quieter game occurring. Lindgren has been ok defensively but has brought little else to the table without Fox. This should remind all of us of Dan Girardi when he was paired with McDonagh. The lesson here is to not pay him much (or at all) if the results do not change.

Beyond those four, Brendan Smith is the best option the Rangers have on the third pair, and that speaks volumes. Unlike Jack Johnson, he can still skate in a decent to good fashion. The problem now is that with Tony DeAngelo gone, the Rangers depth will be tested. Johnson-Smith should absolutely not occur at any point.

That would lead us to a combination of Smith, Hajek, and Bitetto. While I advocate for Smith because of his proven positive defensive metrics, I’d be perfectly open to seeing what anyone from Hartford can do. When or if the Rangers trade DeAngelo, they might need to get a defensive body back just for the sake of finishing the season (especially if the offense wakes up). 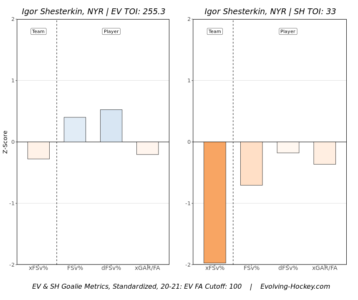 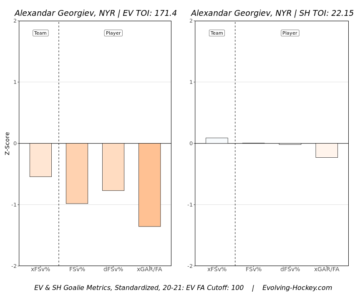 Finally in net, it’s another combination of good and bad news. The good news is that Igor Shesterkin is playing above his expected save percentage at even strength. His weakness thus far has been on the PK. That said, PK results for teams and goaltenders swing wildly year over year. Alex Georgiev, meanwhile, has had a rough start to the season at even strength, getting results below his expected save percentage. If the Rangers truly want to stay in the playoff mix, Shesterkin should start to take more of the #1 role in terms of starts at this point.

In a normal season it’s usually accepted that the on-ice results of teams solidify about 30 games into the season. Changes in trends still happen. Instead of players playing markedly better or worse, it’s usually the result of major lineup or TOI differences. At only 9 GP, the Rangers trends in 3-4 weeks could be vastly different.

Thus far, the key to the Rangers turning average trends into a better season will be continuing the team defensive effort. If this occurs, it gives the offense a chance to wake up and to let the goaltending settle. They likely won’t make playoff noise. But a good run in the middle third of the season would go a long way for the development of certain players.