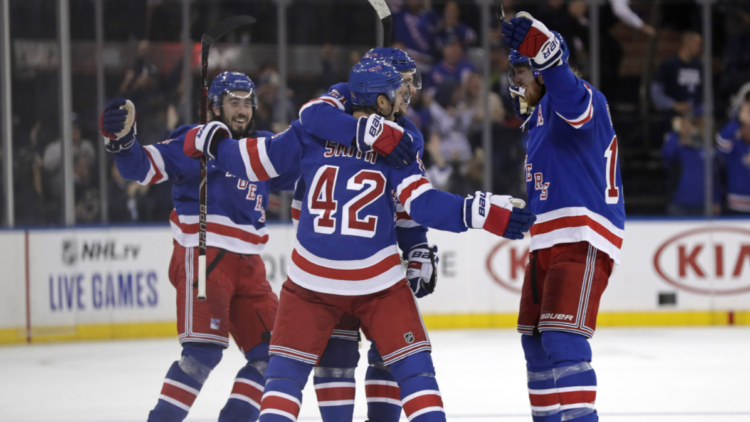 Hello! Before I get into my NY Rangers thoughts thus far, I want to introduce myself. I managed Blue Line Station for a few years before resigning to focus on some creative endeavors. Since leaving BLS, Dave has attempted to bring me aboard here. With the start of the new season, I finally agreed to come aboard with a monthly NY Rangers thoughts column. My goal is to share a month’s worth of thoughts in a single column. If you the readers would like, I’d be happy to do a mailbag once a month as well. Let me know in the comments.

Now let’s get into the fun.

1, The first month of Rangers hockey has….not been so fun. The Rangers own a poor record, can’t finish games, and are quickly losing the hope that many fans had going into the season. I’d like to recommend this article on ESPN. In it, there is plenty of concern over what the Rangers’ “identity” is this season. It’s a question that makes a lot of sense. The team isn’t necessarily re-building anymore. They aren’t particularly tough or fast. Right now? The team identity is that they can’t finish games. That needs to change.

2. A positive I’ve noticed since the first game of the season is that David Quinn is trusting his youngsters. Sure, there have been the odd games where Kaapo Kakko doesn’t get enough minutes or Alexis Lafreniere doesn’t play in overtime, but for the most part, Quinn is letting his youngsters play. This will be key as the season continues to unfold. The Rangers are nearing “make the playoffs or the season is a bust” status (I’d say this starts next season), and the youngsters need to be prepared to play heavy minutes.

4. Two quick notes from the first few games. The fake crowd noise when the Rangers are on the power play is irritating. Hope MSG gets rid of that.

5. This is the worst rebound I think I have ever seen a professional goalie give up.

6. OK, back to overall NY Rangers thoughts. Let’s talk about Pavel Buchnevich. Buchnevich has been the brightest spot on the team, followed closely by K’Andre Miller, then a huge gap before the next player. Buchnevich has been a monster in all three zones, showing defensive prowess that was previously missing from his game. Before the season I spoke of Buchnevich as a replaceable top line winger, as I do believe wingers are the most replaceable players in hockey. Now? If Buchnevich can keep this up for the rest of the season, he deserves to be a pillar of Rangers hockey moving forward.

7. Now let’s go in the opposite direction. Mika Zibanejad has been the most disappointing player thus far. It’s not close. Zibanejad looks slow, discombobulated (a fantastic word, FYI), and altogether nothing like his usual self. I personally subscribe to the “still dealing with covid fatigue” theory no matter what he says, but regardless, the Rangers need more from him. With Filip Chytil out (note that Chytil was 9th in CF% in the NHL before he got hurt), the Rangers do not have a top six center on the roster besides Zibanejad.

The Rangers cannot and will not afford Zibanejad being anything less than his best self.

8. On a similar note, how many games can you point to the Rangers top six being the most notable players on the ice? Chris Kreider is improving, but he needs to have a monster February. Ryan Strome, too. Zibanejad needs to step up.

For the Rangers to make the playoffs, Lafreniere must score as well. I am bolding this so it’s extremely clear, I am not disappointed in Lafreniere’s play. I am simply stating that if the Rangers want to win, and win a lot, they need points from him.

9. When Colin Blackwell getting injured is a travesty, it might say more about your roster than about the player. Ditto Phil DiGuiseppe’s game worsening. Super cool that both players have proven to be useful pieces, but a team should never be relying on pieces like them.

10. Brendan Lemieux is a serviceable fourth liner when he can keep his head on straight. A physical, grinder who is elite at drawing penalties? Sign me up. Kevin Rooney has been fantastic. Realistically, a healthy Rangers team has four solid lines. Now, just need to get healthy.

11. Onto the defense. I already touched on K’Andre Miller. Jacob Trouba is who I want to cover next. I fully believe trading for Jacob Trouba was a brilliant transaction. You can’t typically get top four defensemen for such a low price. However, the extension was a mistake, and one the Rangers made before. The Rangers have a serious problem evaluating NHL defensemen.

In the past it was that they paid players for what they did before (Dan Girardi, Marc Staal), but now it’s that they’re playing defensemen for how they project the defensemen to play (Brady Skjei, Jacob Trouba). It’s a wiser approach, but given that the Rangers cannot evaluate defensemen, it’s disastrous.

Now the Rangers have a broken Trouba on an albatross of a contract. The right play was to let him get acclimated and see how he performed. When it comes to NHL defensemen, the Rangers never get it right.

12. This brings me to the Ryan McDonagh trade. What a disaster. Trading an established first pair defenseman with another year on his contract and a top-six forward should bring back picks and top prospects. Instead, the Rangers got a late first round pick (which admittedly they nailed, but they would have gotten a similar pick from another team), a bottom six forward (Brett Howden), an AHL defenseman (Libor Hajek), and a middle six forward (Vlad Namestnikov). We knew it at the time and it’s only confirmed now, the deal was an absolute fleecing.

Why the Rangers were so motivated to throw Miller in just to get the McDonagh trade was originally beyond me, but here’s my theory. The Rangers had just published The Letter. Fans were expecting big rebuilding moves. The market for McDonagh was not what they expected, but they felt cornered because of their own grand announcement.

It’s well known that Tampa demanded Miller be part of the deal. It was the best the Rangers could do at the time (I am willing to believe this, my issue is the team should have waited until the offseason), so they took it. Poor optics led to poor management.

13. I’m not going to touch on Tony DeAngelo other than to say the player on the ice is a joke, and off the ice is something far worse. I hope he gets claimed and if not, I hope he never plays for the team again. Good riddance.

14. I genuinely believe the Rangers have a fine top four (Ryan Lindgren-Adam Fox, K’Andre Miller-Jacob Trouba) when healthy and can roll four lines alongside a solid goaltending duo when healthy. The bottom defensive pairing is a wreck, but every team has their issues. This is a Positive Thought.

15. OK enough positivity in these NY Rangers thoughts. By starting 3-4-2 in a division as good as the East, the Rangers are almost certainly going to miss the playoffs unless they go on some kind of bonkers run of winning 6+ games in a row. I consider the Capitals and the Bruins shoo-ins. The Flyers will almost certainly make it. That leaves one spot for the rest of the division.

Catching up by leapfrogging every single team in the division for the rest of the season? Realistically it seems highly unlikely, but the Rangers can do it if they play perfect hockey moving forward. Truly, perfect hockey.

I think the Rangers have a playoff roster. I truly do. But the start of the season, especially giving the Penguins so many points back, will probably keep them on the outside when all is said and done.

16. I know the announcers love it, but I’ve personally loathed the “play the same team 2-3 games in a row” schedule quirk. It’s a necessity this season, but I hope it doesn’t last beyond this season. I’m already tired of watching the Penguins. I want to see new blood.

17. I am not worried about Igor Shesterkin and on a slightly smaller scale Alex Georgiev. They will be fine. This is a tough season for goalies across the league.

So when Shesterkin or Georgiev can’t make the Big Save and everyone cries about Lundqvist being gone, it’s incredibly silly to me. This isn’t about Hank being gone. This is about a team unable to finish games.

19. Jack Johnson is terrible at hockey.

Thanks for reading my first NY Rangers thoughts column! If you would like to connect, here is my Twitter. I also am going to plug my creative endeavors for a second. During quarantine I put together a couple of zines to raise $ for LGBTQ/POC artists out of work due to Covid and the Philadelphia Bail Fund. I write poetry, but the first of the two zines also has art, photography, and more. If you would like to support, DM me on Twitter or on either of my Instagram’s (here and here). Thanks all!