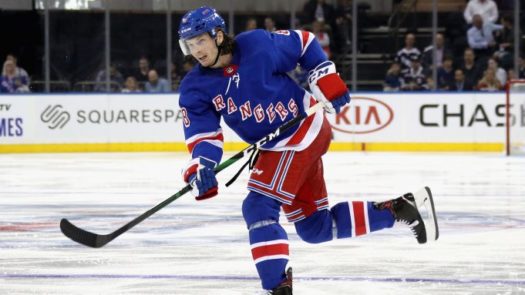 The NY Rangers defensive issues have begun already. But let’s start with the positive:

It is a very exciting, somewhat unprecedented time — at least in recent memory — to follow the Rangers. The team is three years into a complete overhaul of their roster at the start of the 2021-22 season. Management has done a great job collecting new talent.

The Rangers’ regular season was cut short by the pandemic as they had some real momentum to their game. When the hockey world stopped on March 11, 2020, the team was just one point behind the Islanders and three points from a wildcard slot.

However, when the Rangers got their shot at a spot in the playoffs, the team’s inability to find their game led to a swift sweep in the Qualifying Round in Toronto.

The Rangers kicked off their season with a 4-0 loss to the Islanders at home, with much of the same on display. While these are extraordinary times filled with unfamiliar circumstances, the inconsistency on the defensive end remains their clearest issue.

Success on defense will come down to figuring out how to structure pairings that can maintain consistency. And right now, there seem to be question marks everywhere on the defensive end. The pairing of Adam Fox and Ryan Lindgren seems to be the only one that is working.

Fox’s confidence and vision have made him one of the best young defensive prospects in the league today. Put this next to the physical yet responsible Lindgren, and you have yourself a stellar pair. They can break up opponents’ plays and create opportunity out of the defensive end.

The Rangers acquired Jacob Trouba, anticipating that he would serve as a top-pair defenseman in a shutdown role. This was similar to the one he played in during his time in Winnipeg. Through his first season on Broadway, however, he never found his stride.

Trouba played Thursday night with rookie K’Andre Miller. There was some question as to whether or not Miller would make the roster, so it is exciting that he appeared out of camp. Early exposure in the league is great because it means he’ll get to learn and grow at the highest level.

Converse to new, young talent, management made the decision to offload Marc Staal this summer. They then added Marc Staal 2.0 to the roster in the form of Jack Johnson. Rangers head coach David Quinn said in an interview that he thought Johnson gets a “bad rep” due to his numbers. However, Johnson showed his true colors, taking some fault in all four Islander goals against the Rangers.

Tony DeAngelo has been another player with a lot of question marks. DeAngelo had a stellar 2019-20 season on the offensive end registering 53 points (15g, 38a). He then locked in a two-year extension this offseason. However, with the pipeline of young RHD, there is a question if DeAngelo will fit and if so for how long.

Quinn entertained the idea of moving the 25-year-old to his offside — where he had spent some time playing during his OHL career — and up to the top pair to play with Trouba. This experiment was short-lived. One scrimmage later, the Johnson-DeAngelo pairing played and was confirmed to start as a part of the opening night roster.

So how do the Rangers best solve these apparent issues?

The first step is to support Trouba. Not to knock the ability that Miller could eventually display, but his naivety will do nothing to help a player who has struggled in his role thus far.

Trouba has proven he can handle the big minutes, and the key to pulling his numbers out of the abyss is to get him back into a role that suits him better. One where he can have a bit more room to play the ice and have someone else sit back.

Trouba spent time with Brendan Smith and played sustainably. Smith — a defense-first oriented player whose stats, unfortunately, fell off a cliff — makes sense for Trouba as a partner. However, if Trouba is going to continue to get top minutes, Smith should not be playing with him in those important minutes.

While DeAngelo moving to the left should happen, as a very offensive defenseman, he doesn’t make sense for Trouba either. Lindgren could be an answer to the Trouba problem. Of course, this would mean splitting up the only defensive pair that was remotely successful last season.

However, Adam Fox could play with anyone; and what a great opportunity it would be for newcomer K’Andre Miller to have a shot playing and growing with Fox. Miller brings that slightly more physical edge to what Fox offers — merely due to his size — but both are known to excel when it comes to play in transition.

The question then becomes what a pairing like Jack Johnson/Brendan Smith and DeAngelo has any business doing on the roster. Does it really add value and if not, how do you solve that issue?

With so much defensive talent, especially on the right side, coming in the years ahead is this something you work to fix or try to live with?

Whatever decisions come to pass, the most vital piece of this defensive puzzle will ultimately be putting players in roles that allow them to add value in important moments on the ice.