Another day, another young center rumored to be on the trade block. This time it is Columbus Blue Jackets center Pierre-Luc Dubois, and his name has piqued the interest of Rangers fans. His name initially popped up in rumors on New Year’s Eve. These rumors subsided when he was signed to a deal two hours later. But then they resurfaced as Larry Brooks mentioned Dubois doesn’t want to sign long term.

For the Rangers, acquiring Pierre-Luc Dubois would mean getting a young, cost controlled center who is quite good. The question then becomes – how much would it cost, and is his production worth that cost?

Dubois is a top line center who is putting up 50-60 points as a 22 year old. That may not seem like much, but Columbus isn’t exactly a high powered offense. He was playing mostly with Gustav Nyquist and David Savard, who are solid but not really offensively gifted players. 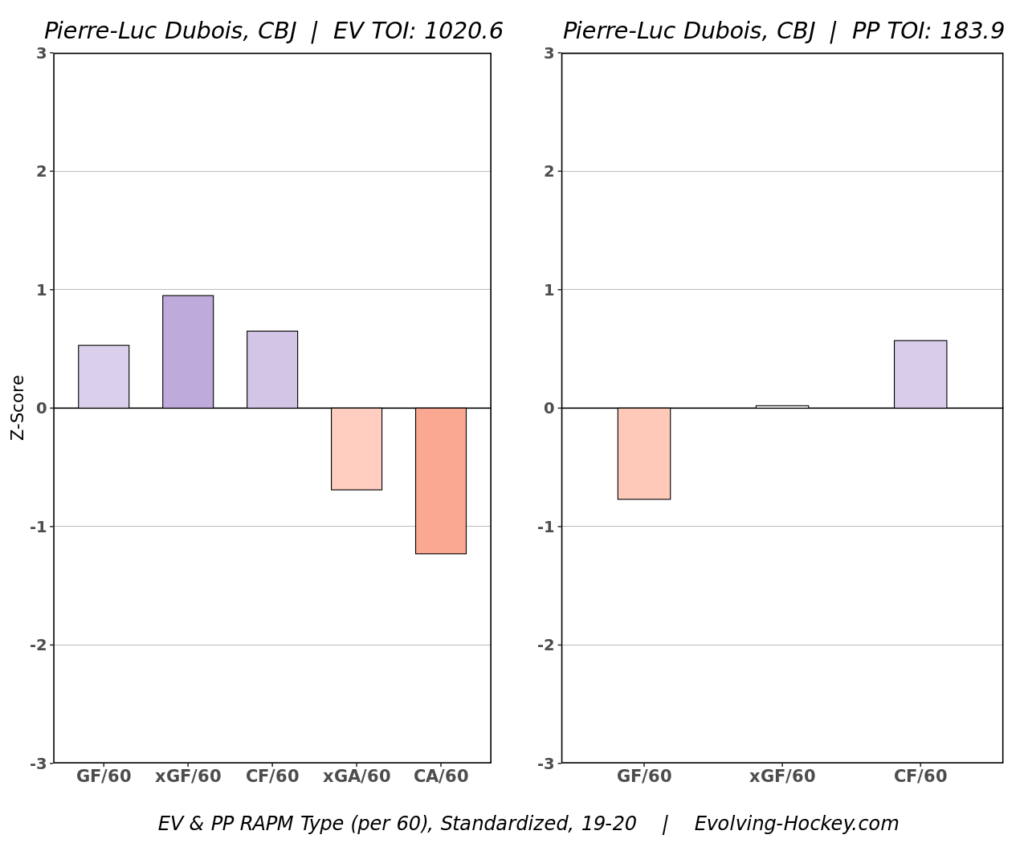 The advanced numbers show Dubois is a pretty solid offensive driver, but not very good on defense. That’s fine, as he wouldn’t be used in a role that requires superior defensive play. Plus it’s fair to assume he will only get better, since he’s just 22 years old. The powerplay production is a bit concerning, though.

It’s safe to assume that with the Rangers, Dubois would immediately supplant Ryan Strome as the 2C, and he’d get time with Artemi Panarin and Kaapo Kakko. Panarin will certainly boost Dubois’ production, but how much would depend on Kakko’s ability to turn it around this season. It also helps that Panarin and Dubois are familiar with each other.

This is always the issue. The Blue Jackets won’t give up a 22 year old top center that easily. It’s safe to assume they ask for Kakko, which in return gets a dial tone from the Rangers. So it would have to be a package deal that doesn’t include Kakko or Alexis Lafreniere.

It’s safe to assume that Filip Chytil would need to be involved. Center for center, after all. But Chytil is not on the same level as Dubois. At least not yet. More needs to be added.

The two strongest points in the Rangers farm system are wing and defense. There are only two real options at wing to trade, and those are Vitali Kravtsov and Julien Gauthier. Kravtsov and Chytil might work, since I doubt Gauthier has significant enough trade value. If it’s defense, then it’s Tony DeAngelo or Ryan Lindgren at the NHL level. At the prospect level, it’s K’Andre Miller, Matthew Robertson, or Nils Lundkvist.

Suffice it to say, acquiring Dubois is going to hurt.

Any trade would need to consider Dubois getting at least $6.5 million once his current deal expires in two years. By that point, the Rangers will need deals for Kakko and Adam Fox, and be one year away from a new deal for Lafreniere.

But the elephant in the room is Mika Zibanejad. His team-friendly deal would be up, and he’s likely to get close to double his current cap hit. If the Rangers acquire Dubois, given all the other contracts, it is unlikely the Rangers would be able to keep Zibanejad. At least not without shedding Jacob Trouba’s contract.

Between the trade cost and the downstream cap cost, it will be a tough pill to swallow if the Rangers acquire Pierre-Luc Dubois. Going down this road means parting ways with more than we might like. That’s usually how trades go, unfortunately.