One of the more interesting discussion points lately has been center depth. The Rangers are lacking, and there was a rumor the Rangers were talking to Brian Boyle. Boyle, 36, should be a familiar name with Rangers fans. He was a key cog in the bottom-six of the great Rangers teams that just missed it during the 2012-2015 runs. But that was six years ago. Does this really make sense?

Boyle would be viewed as an insurance policy and a faceoff winning center for the Rangers. The bottom-six center depth is more or less Brett Howden and Filip Chytil, neither of which are good at faceoffs. Boyle also comes with a reputation of being a defense-first center with some snarl.

The thing with Boyle is that well, he’s old. The defense-first center with snarl role could be held by newly signed Kevin Rooney. Rooney is nine years younger and had a better point-per-game pace than Boyle. So the fit already doesn’t seem to make sense.

Boyle would certainly add some experience and leadership qualities to the locker room. There aren’t many players on the Rangers who have “been there before.” Despite the lacking stats, there is value in having that kind of experience on the roster. The question then becomes – is that experience worth a clearly declining asset on the ice?

Also – the Rangers would need to clear a roster spot/cap space. Although that may be an easy thing to do with a simply waivers transaction. 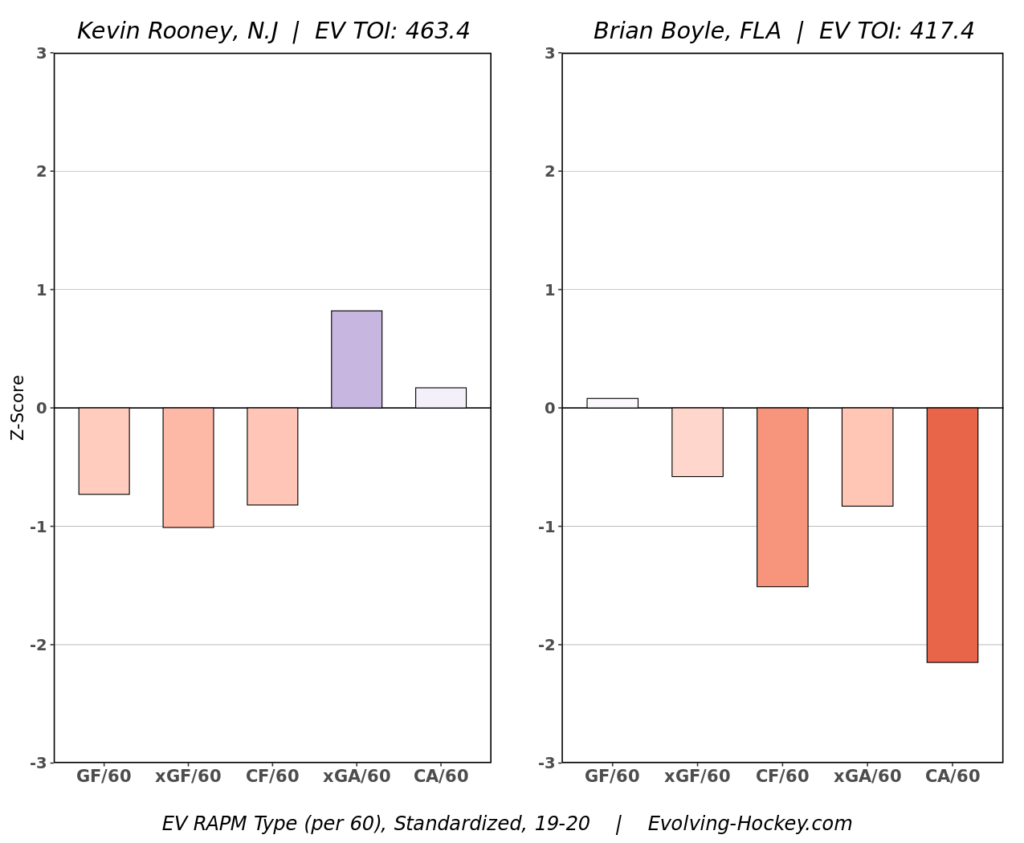 Neither Boyle nor Rooney are going to wow you offensively. But that’s not their role. Their role is limiting defensive opportunities. Boyle unfortunately hasn’t been effective in a while. Rooney, on the other hand, at the very least treads water.

The team factors in the above charts are relatively minor, since both the Devils and Panthers were bad. Both had bottom-six roles as well. In a direct comparison, Rooney is essentially the new Boyle. Minus that leadership aspect, of course.

The Brian Boyle to the Rangers rumor just doesn’t really pass the sniff test. Perhaps Boyle can be an emergency injury replacement on the taxi squad. Again, there is value in his experience.

For Boyle, the taxi squad role would mean being sent to the AHL, but not actually reporting. He’d get his full salary –assuming he signs a one-way deal– so that might be a good trade-off. If injuries and/or COVID-19 take their toll, he’d be a good emergency stand in. Other than that, it’s hard to find a full time role for Boyle.

Dave2 weeks ago
12 245
Show More
Live From The Blue Seats
Become a Patron!
The Authors