The Rangers still have a lot of questions on left defense. Free agency isn’t going to address these issues. As of now, the Rangers have Ryan Lindgren, Brendan Smith, and Jack Johnson as their starting three on LD, with Tarmo Reunanen, Yegor Rykov, and K’Andre Miller entering as training camp battles. One interesting name has come up as a potential NY Rangers trade target, and that is Florida’s Mackenzie Weegar.

Weegar, a righty that plays the left side, has averaged a 20-point pace the last two seasons with the Panthers. But that doesn’t mean he can’t drive offense. He just doesn’t have the sexy numbers, which may actually keep his cost down. 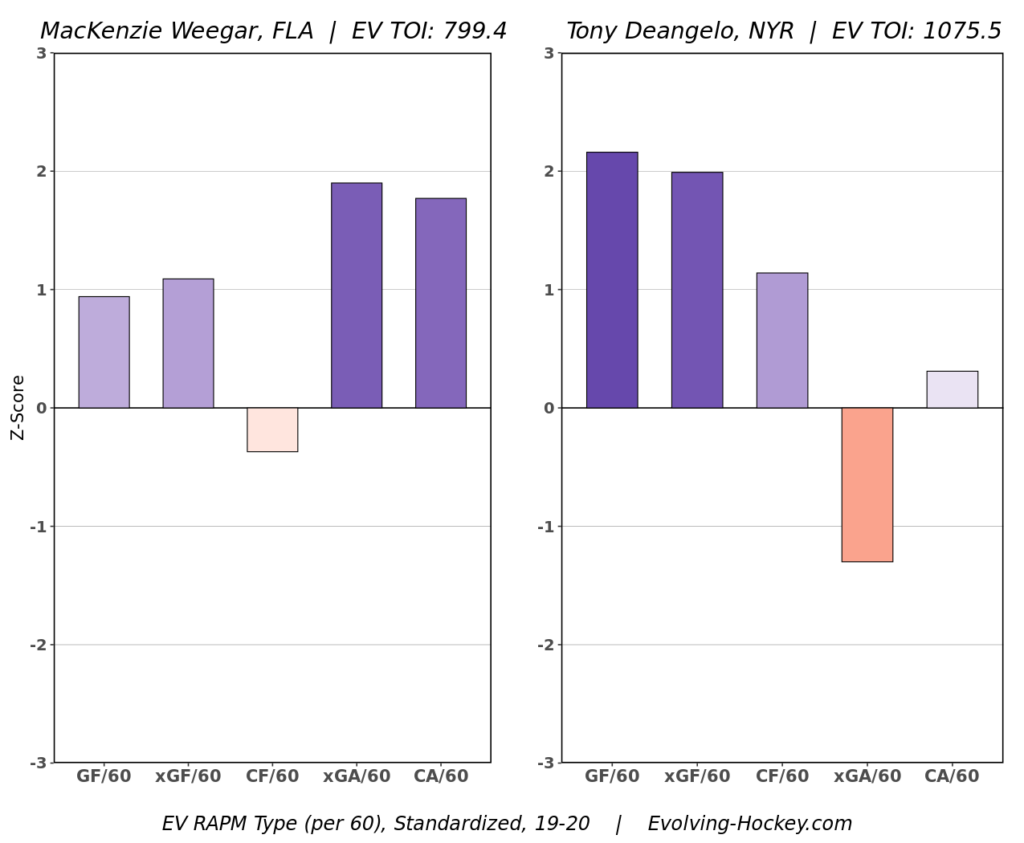 Before I get yelled at, I used Tony DeAngelo as a comparison here just as an exercise. It doesn’t mean anything. Weegar excels at the defensive aspects of the game while also being able to drive offensive chances. The numbers suggest that if put into a more offensive role, he might put up more points. He’s no DeAngelo offensively, but for a team that needs a boost defensively, he’d be a good target.

Putting Weegar on the top pair with Jacob Trouba allows Trouba to roam free offensively. He was very successful in this role in Winnipeg. Trouba hasn’t really had that kind of partner with the Rangers. Weegar also has the added benefit of being able to make that first pass out of the zone, again allowing Trouba to join the rush and have a more offensive impact.

The 26 year old RFA, per Evolving-Hockey, is due about $3.8 million over four years, taking him to his age-30 season. Florida looks to be a budget team this coming season, so that might be too much for them. They Panthers also have $25 million committed to defensemen over the next two seasons, so they may be looking for cheaper options.

To make that contract work within the cap and the roster space, the Rangers would need to find a trade partner for one or both of Ryan Strome and Brendan Smith. It’s rumored they are already shopping both, with Strome more of a priority. But adding Weegar means creating roster flexibility as well.

This is where it get interesting. How much is roster cost worth to Florida? Does Libor Hajek make sense as the focal point in this trade? He’s a young, cost controlled defenseman with NHL experience. Bill Zito is a bit of an unknown when it comes to trades.

The Rangers have a lot of pieces that could work in a trade to land Mackenzie Weegar. The question is, what does Zito want, and is it too much? It’s unlikely he would take Strome or Smith, so clearing space would have to be done in a separate deal.

Weegar might be a far cheaper option than Vince Dunn, another potential target for the Rangers. Both are solid options. But when it comes to cost, perhaps Weegar is the option here?