There is a lot of smoke around the NY Rangers targeting Matt Martin in free agency. It’s funny how we can dismiss something that came up in September, but there are rumblings it might happen. The Rangers need some help on the bottom six and are also looking to be tougher to play against.

The soon to be former Islander certainly fits both of those needs, however how well he fits those needs is the bigger question. Martin, 31, is a fourth line guy, but has been a 12/13F for his last few seasons. His claim to fame is being an Islander, a fighter, and for that laughable contract the Leafs gave him in 2016. 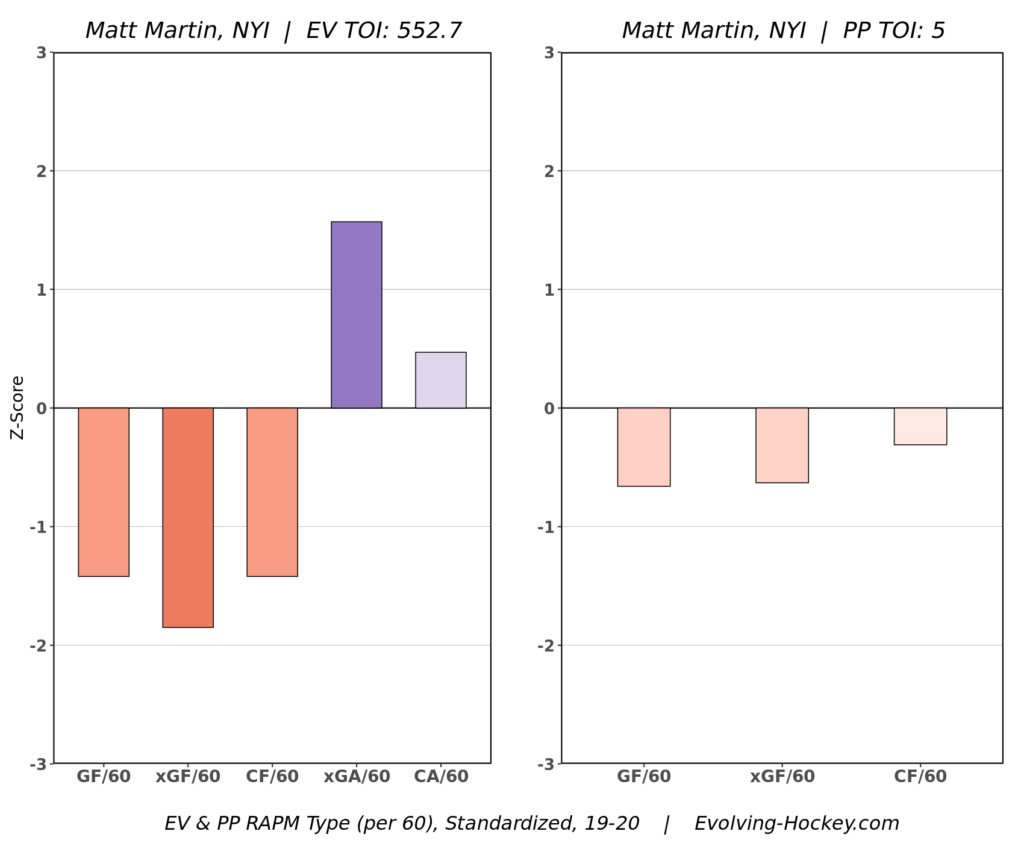 Martin isn’t really going to help you offensively. He’s a fighter and a fourth liner. That’s expected. He’s actually surprisingly good in his own zone at limiting quality against. I have to admit, I was surprised to see that.

Per Evolving-Hockey, Martin is due anywhere from a 1-3 year contract. The dollars do vary:

For a player like Martin, you really don’t want to go more than one year, especially when you’re in a cap crunch to begin with. That said, it is an expansion draft offseason. That means two year deals will be rampant.

The big question is how Martin will be used. I’m not going to lose sleep if the Rangers sign Martin to be a 12/13F on a one year deal at under $1 million. That’s really nothing to get up in arms about. I’d even be understanding of two years, given the expansion draft. Although I’d like to see that two year deal come in under that $1.25 million projection.

The concern would be if the Rangers go three years for him. Spending big on the fourth line is not a recipe for success. Just look at the Islanders. They have way too much money committed to bottom six players, and now have major issues trying to keep Mat Barzal and Ryan Pulock.

Martin isn’t necessarily a player I’d target, especially since he hasn’t really been an 82 game player for three years now. But in terms of a 13F and an insurance policy, the Rangers could do worse than Matt Martin.