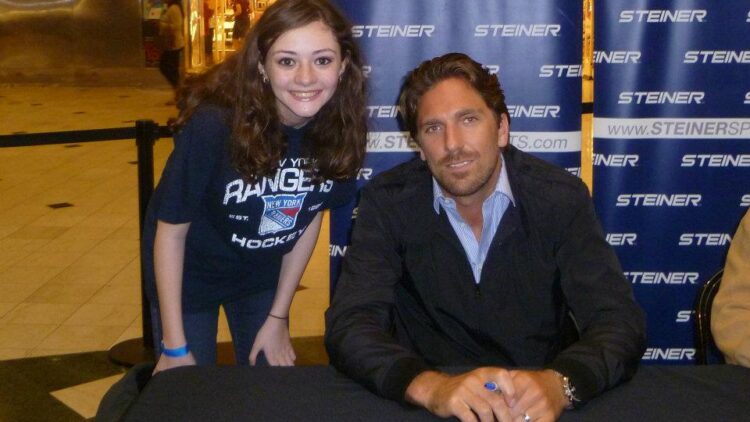 *Admin Note: Please welcome Sam Prevot to the site. Sam is a phenomenal write, and writes for PuckerUpSports and PuckerUpToronto. She’s a great add to the team here at BSB. Follow her on Twitter here.

Hank. The King. World Champion. Olympic Gold Medalist. All-Star. That’s how the world sees you, what they call you. But to me, you’re my first favorite hockey player. The constant in my hockey world for over a decade.

Believe it or not, I was not always a die-hard hockey fanatic. Baseball was my first love, and I would casually watch Rangers games with my hockey-obsessed parents. Then one day, a young Swede named Henrik Lundqvist took over the Rangers’ goal. I was captivated. Suddenly my eyes were glued to every game and the rest, as they say, is history.

My Henrik Lundqvist heritage jersey was my second Rangers jersey ever (after my Messier child-sized jersey) and it is hanging on the back of my chair at the now-closed Bleacher Report New York office.

When I was 14, I was fortunate enough to meet you at a signing at Roosevelt Field Mall. My mom and I sped to the mall after school, and the line seemed to go on for miles. But we got our autograph and our photo together, and it was one of the best days of my young life.

Since then I have been to countless games. I spent my 21st birthday at MSG seeing a Rangers preseason game and as always you stopped after the game to sign things for fans. I had gotten a puck at warmups, and you signed it. I felt like I did on that day at Roosevelt Field. Pure joy.

I’ve seen the team I love so dearly go through many ups and downs. Particularly during the Rangers’ runs from 2012-2015. Hearing “Henrique! It’s over!” still makes me feel sick to my stomach, and I haven’t rewatched any games or highlights from the 2014 Cup Finals. To this day, I still firmly believe the Cup should’ve been ours. Hank, you were the one that led us there. You were the one that always gave us hope, no matter how bleak things seemed. You were our hero, our star, the face of our franchise, the King of New York.

It’s hard to put into words how I felt when the initial trade rumors started after the Rangers sent out “the letter” a couple of years ago. If you were going to leave, at least let it be to a contender so I could see you lift the greatest trophy in all of sports. The rumors of a buyout, however, never sat right with me.

How could we end your tenure with the Rangers like this? To just send you packing after everything you gave us, after everything we’ve been through together? I grew up with you, and I believe you grew up with us, too. The love between Henrik Lundqvist and Rangers fans has always been a mutual one. Now, that was reportedly all going to end with the worst send-off imaginable. In my opinion, it’s kind of disrespectful to someone that has done so much for the organization.

But here we are. It’s official. The “New York Rangers Buy Out Henrik Lundqvist” headlines are flooding timelines everywhere. It hurts. It really hurts.

Thank you for everything, Henrik. You will always be the King of New York. I will miss you dearly. Rangers hockey won’t be the same without you.

Once a Ranger, Always a Ranger,