The Max Domi trade rumors are heating up, and there are rumblings that the Rangers have at least shown some interest. Kicking the tires isn’t surprising, but the question is about whether or not he could be a good fit in New York.

Domi, a 25 year old center/wing, is currently the Habs 3LW. While he’s capable of playing center, he’s not a center with the Habs. He’s behind Phillip Danault, Nick Suzuki, and Jesperi Kotkaniemi down the middle. Domi is also behind Tomas Tatar and Jonathan Drouin on the left wing.

Where Does He Fit?

If he’s only a wing, then the Rangers really don’t need another winger. So let’s assume the Rangers view him as a center, otherwise this is an exercise in futility. Domi is coming off a two-year bridge deal that paid him $3.15 million. Based on Evolving-Hockey’s contract projections, Domi is looking at a 5 year deal at $6.227 million or an 8 year deal at $8.5 million. Both are pretty expensive.

Is He Worth It?

The question about Domi is whether or not he’s worth that kind of commitment. Given he’s a third liner on Montreal, he better be the 2C on the Rangers or else, right off the bat, it’s a bad investment. What Domi has going for him is that one 70-point season. What he doesn’t have going for him is basically everything else. 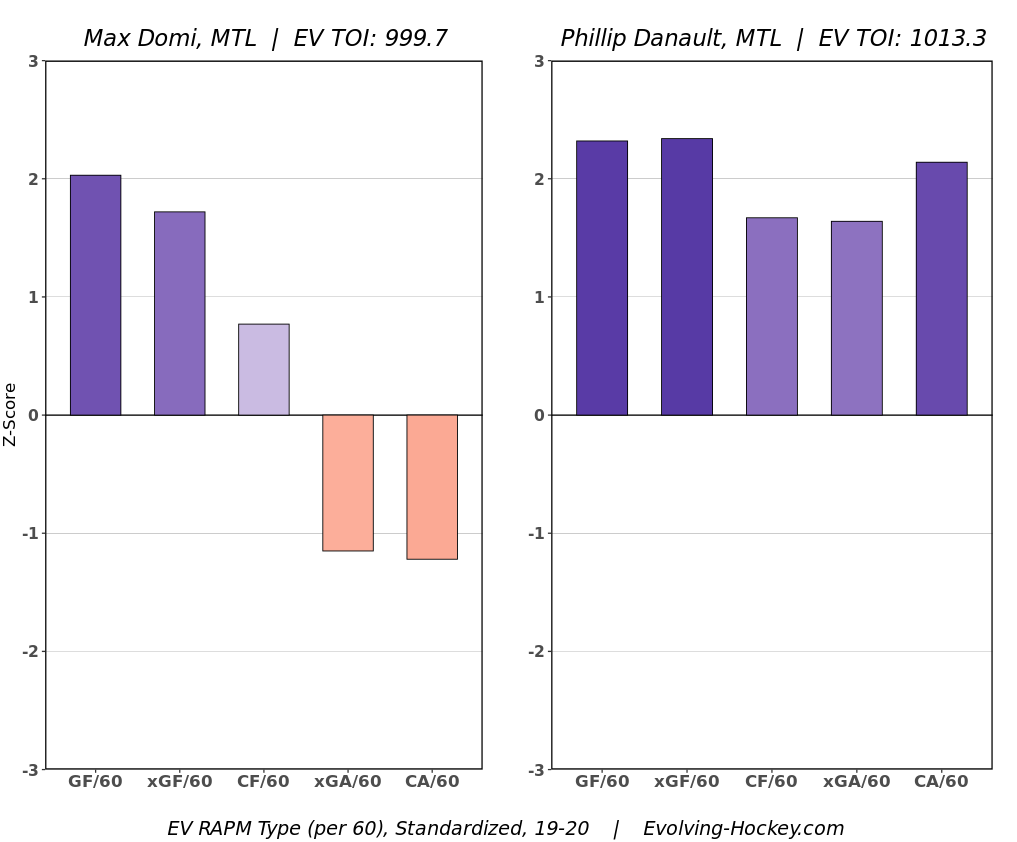 Comparing him to Phillip Danault just because he might be a trade target as well. Domi’s xGF/60 is lower than his actual GF/60, which implies he might have a little downturn next season. But the bigger concern is his impact defensively, which is bad.

The common theme is that Domi is an “agitator” and something the Rangers need in the playoffs. For someone to be effective in that role, he will need to draw more penalties that he takes. Domi took 15 minor penalties last season, but also drew 16 penalties. For comparison’s sake, Brendan Lemieux, who excels at this, took 18 minor penalties but drew 32. Lemieux is a much more accomplished and controlled agitator.

In addition to that big contract he’s due, there’s the trade capital. The famous last name might make that trade cost higher than expected, but I have nothing to back that up. Perhaps that 70 point season means a higher trade cost though.

For the sake of discussion, let’s use the same trade value in the Danault post. Montreal considers itself a playoff team, so something off the roster might be warranted. I had suggested that Ryan Strome might be a centerpiece in a Danault post, and while I don’t really believe my own words there, let’s just keep that going.

Strome would clearly not be enough. The Rangers would need to send a prospect or two and/or a draft pick. That’s on top of the big contract that is about as dangerous as Strome’s long-term deal would be. It might make you think twice about a trade for Max Domi.