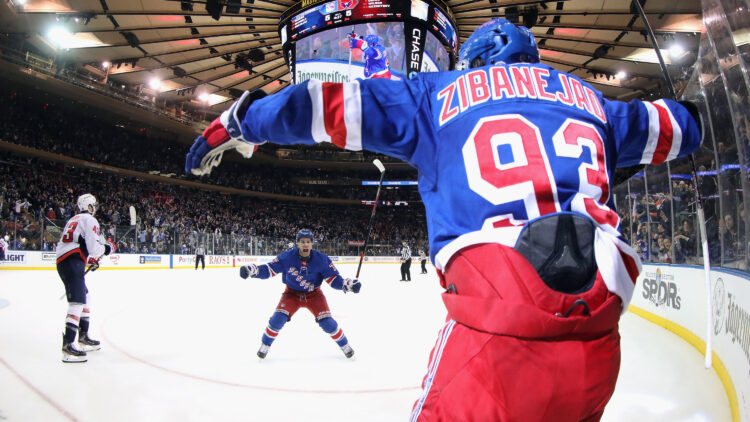 Four years ago today, the NY Rangers traded Derick Brassard and a 7th round pick to the Ottawa Senators for Mika Zibanejad and a 2nd round pick.

The Rangers sold high on Brassard, grabbing a raw but talented Zibanejad. Four years later, Brassard went from 27 goals to playing for five teams in three years. The move was a salary saving move for the Senators, as Brassard was owed fewer real dollars than Brassard. The fact that this trade was made after Brassard’s bonus was paid is evidence of this.

Trading Brassard was a tough pill to swallow for many folks. Just look at the replies to the tweet. Brass was a fan favorite, but was also 28 years old at the time of the trade. He shot 15% that year, well above his career average at the time. He was their best trade chip at that time.

The trade wasn’t meant to be an immediate positive for the 2016-2017 season. However Zibanejad and Brassard put up near identical stats that year. Brassard put up 39 and 38 points with Ottawa before a weird trade sent him to Pittsburgh via Vegas.

Until he landed with the Islanders this season, Brassard barely sniffed 40 points following the trade.

In Zibanejad, the Rangers knew what they were getting. Zibanejad wasted no time, putting up 14-23-37 in just over 50 games his first season. He then quickly climbed to a consistent 30-goal scorer before taking over the league this year.

Zibanejad is more than a pure goal scorer for the Rangers now. He’s a leader on the ice and in the locker room. He’s also on the very short list of potential captains, if this team names one for the upcoming season. It’s really him or Chris Kreider at this point.

The Rangers lucked out in this one, as Eugene Melnyk was definitely behind this trade. Zibanejad cost more real-world dollars than Brassard, and the Senators didn’t want that. Sometimes, having deep pockets helps in a cap league.

The draft picks are often slept on. The Rangers, in addition to getting the better player in the deal, also got a 2018 2nd round pick. The Rangers eventually used that pick to trade for Brendan Smith at the 2017 trade deadline. That trade worked out fine at the time, although the four year extension following backfired.

The Senators got a 2018 7th round pick that they used on Luke Loheit. He’s currently in the NCAA.

The Rangers traded an aging Brassard at the height of his value for a 23 year old ZIbanejad. Zibanejad is the current 1C and the likely 1C for the foreseeable future. He’s also their best shooter who gives them their own threat from the Ovechkin spot on the powerplay.

The Mika ZIbanejad trade really set the foundation for the current Rangers rebuild. Without it, they’d still be lacking a 1C to go with their skilled prospects and Artemi Panarin. This turned out to be an organizational shifting trade by Jeff Gorton, and perhaps his best as General Manager of the Rangers.