The Rangers landed Jacob Trouba last Spring for pennies on the dollar. A late first round pick and Neal Pionk was all it took to land the top pairing RD, and they promptly signed him to a seven year, $8 million contract. Trouba was signed to be the 1RD and was 1/2 of the complete resurgence of the right side of the blue line. His performance this season may not have met those expectations, at least not yet.

Trouba’s first season fell short of expectations on the offensive side of the puck. Coming off a 50-point season with Winnipeg, Trouba put up a line or 7-20-27 in 70 games, which is more in line with his other seasons than his career season in 2018-2019. There are many factors at play here other than he had a down year, and it requires digging.

The big factor is Trouba’s powerplay production. Last season he put up 3-15-18 on the powerplay. This season he put up just 4-4-8. This isn’t necessarily on Trouba. As the season progressed, both Tony DeAngelo and Adam Fox showed they were better puck movers, thus earned more PP time. Trouba’s PP ice time went down from 2:04/game last season to 1:47/game this season. It may not seem like much, but that’s a full shift of PP time when that is already limited to begin with. He also shifted from PP1 to PP2, which meant being taken off the PP unit with both Mika Zibanejad and Artemi Panarin.

Regardless of reasons, Trouba still under performed offensively. There’s more to the position. The Rangers brought Trouba in to be a rock on defense as well, which may or may not miscast him depending on how you viewed him in Winnipeg. 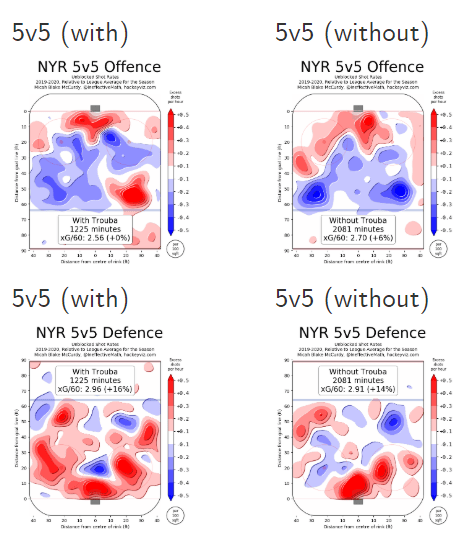 The Rangers performed better offensively without Trouba on the ice, something covered above. However Trouba did have a more positive effect defensively, albeit slightly. The area to focus on is the lower right section by the net. With Trouba on the ice, the dark red circle is moved out to the faceoff dot. When he’s off the ice, it moves closer. This suggests that while Trouba didn’t have a major impact, he controlled his area of the ice better comparatively to the rest of the team.

Trouba was moved off the top powerplay unit, but was did get some time and was also used as a top penalty killer. Given Trouba wasn’t on PP1, his powerplay impact is going to be skewed. Most of the difference is in the Zibanejad side of the ice. 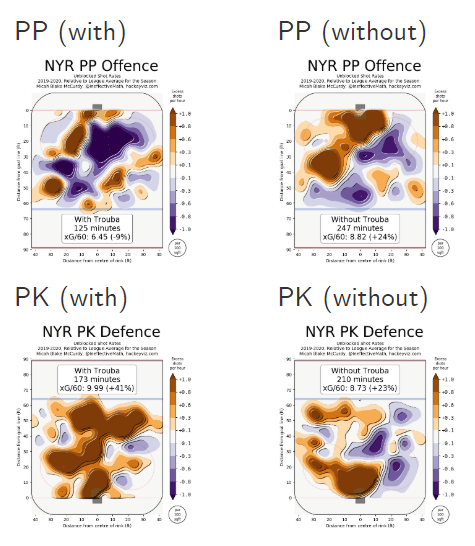 Trends matter. The Rangers were far better from December-February than they were in October and November. It’s something we’ve been stating for a while. 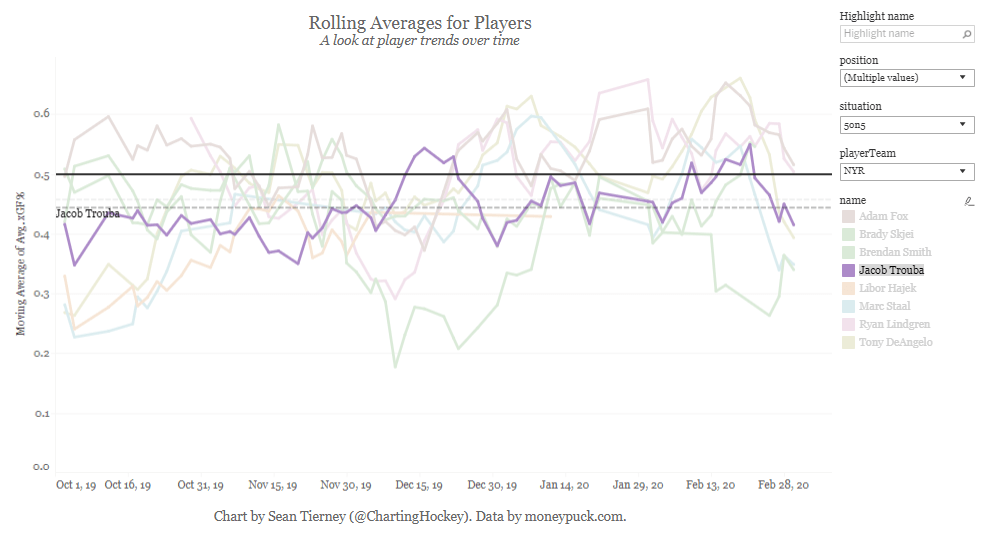 Trouba, like most, started out very slowly. The big uptick is in November/December when the Rangers started playing well. Eventually Trouba evened out a little below league average. Not the best season for Trouba.

In the end, Jacob Trouba’s performace underwhelmed, but he will likely be fine. The bright side is that he will likely improve. The team is going to get better. Trouba will have a full season under his belt. There’s a chance that Lindy Ruff’s departure has a positive impact.