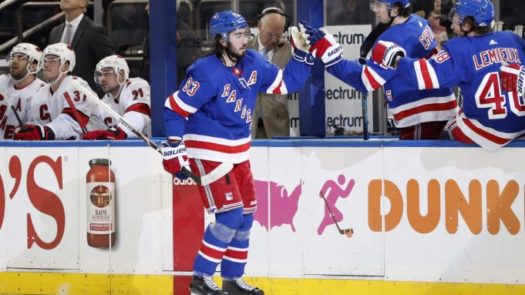 What a season it was for Mika Zibanejad. Entering the season with “doubts” that he could be a 1C, he torched the critics from the drop of the puck in the first game of the season. Despite an injury, Zibanejad finished among the league leaders in goals (41) and finished with a line of 41-34-75 (15-12-27 on the PP) in 57 games. He was the league leaders in goals per game (0.71) and had he continued that pace throughout an 82 game pace, he would have flirted with a 60-goal season. His five-goal game to beat the Washington Capitals in a must-win game gave me the inspiration to toy with those who doubted him with a tongue-in-cheek post. The comments in that post are still my favorite.

Suffice it to say, Zibanejad is the 1C of the future, or at least until the Rangers land Jack Eichel for a bargain. He’s an elite goal scorer with a howitzer of a shot.

It’s unlikely he continues shooting 20% (his career average is 13%), but he should be in the 40-50 goal range for a few more seasons. The question now is what he does away from the puck. This is the are where Zibanejad can improve. 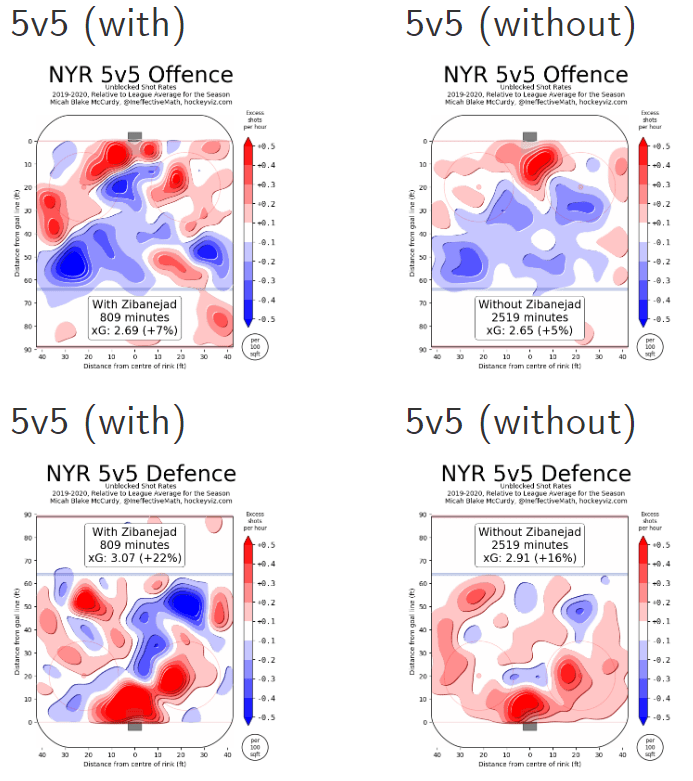 Zibanejad is not a guy that coasts away from the puck, but his impact without the puck is a bit muted from a possession/driving offense standpoint. He has a positive impact, but comparatively to the rest of the team, it’s not as big as Artemi Panarin’s or even Pavel Buchnevich’s. That’s fine though! Zibanejad’s role is to put himself in a position to score, and you need balance on a team. He’s not a detriment on the ice without the puck like previous Ryan Strome seasons (not this past one for Strome, wow), his role is to score.

Defensively is a little concerning, since the team is actually performing better defensively without Zibanejad on the ice. The area of focus for me is the high slot area, which is a high danger zone for shots against. There is a noticeable difference between the two, which suggests that teams are getting more shots from the high slot while Zibanejad is on the ice, compared to other NY Rangers centers. However given how bad the Rangers were at the start of the season, and Zibanejad’s injury, we need to look at how he trended over time. 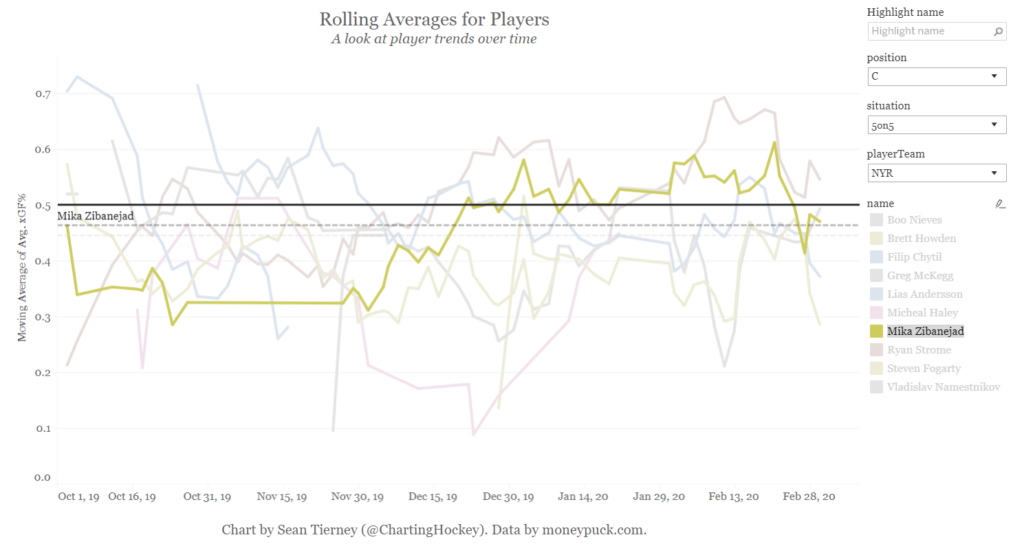 Zibanejad, like everyone, had a terrible defensive start to the season, and also had a dip at the end when the Rangers were dealing with injuries. The flat line from October to November is his injury duration. Immediately upon his return, the Rangers started having significantly better success, and his xGF% rose along with the team. This might suggest that the shot location heat maps above are a little skewed to early and late season struggles for the entire team, and not necessarily indicative of a full season of play. Regardless, it’s still something to note in this career season for Zibanejad.

Given Zibanejad’s incredible performance on special teams, let’s take a loot at how he performed there, aside from the 15-12-27 line. 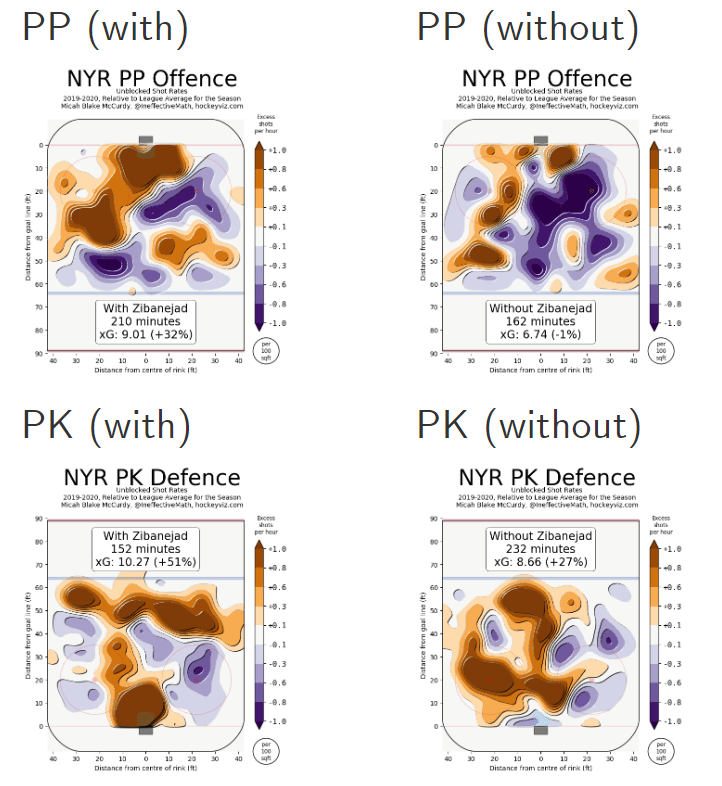 Powerplay offense….wow. Let’s just leave it at that.

As for penalty kill, this is in line with the conclusion above that Zibanejad’s defensive work could use some fine tuning. That’s a large (24%!) difference in penalty kill effectiveness without Zibanejad. Again – this is ok! The offensive production far outweighs the defensive concerns, and as the Rangers get more balanced with better depth, perhaps Zibanejad sees less time on the PK.

Overall, Zibanejad’s career season is what propelled the Rangers to the play-in round for this year’s playoffs. You can’t just dismiss the defensive areas for improvement, but it can be glossed over because of his scoring pace. He’s clearly the 1C of the future, so hopefully he improves in those areas.