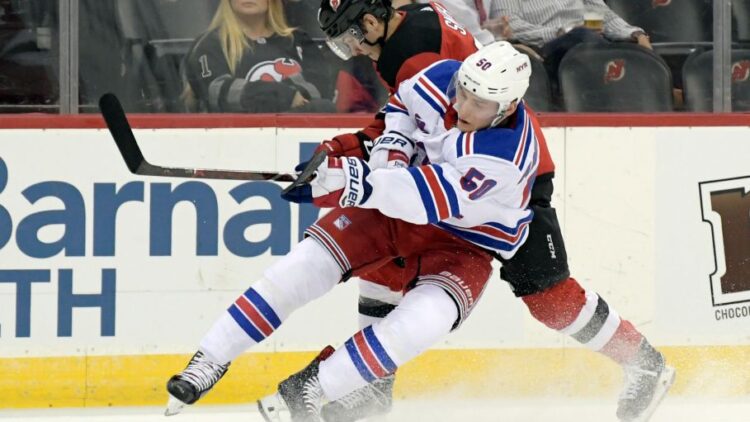 Per Johan Rylander, John Davidson is taking a personal interest in repairing the relationship with 2017 first round pick Lias Andersson. Both he and coach David Quinn have called Andersson in Sweden, stating that they are both interested in Andersson playing in the playoffs for the Rangers. Andersson had left North American hockey after a bad experience with the Rangers/Hartford Wolf Pack, and formally requested a trade after.

Repairing the relationship with Andersson should be a critical step in the Blueshirts’ offseason and playoff plans this summer. They spent the 7th overall pick in 2017 on him, and it would be folly to let this past season be the thing that ends that relationship.

There is fault on both sides, as the Rangers did not give Andersson a true shot despite clearly outperforming Brett Howden, being a better long term option than Micheal Haley, and being an actual forward as opposed to Brendan Smith. Andersson, who is still only 21 years old, had issues adjusting to this disappointment and developed bad habits. But it’s worth noting that players like Chris Kreider, Mats Zuccarello, and JT Miller all struggled at that age, bouncing around different leagues before finally sticking with the Rangers.

The question I have isn’t about Andersson’s relationship or NHL readiness, it’s about where the Rangers would insert him into the lineup. The pending Brendan Lemieux suspension might open up a spot, same with the uncertainty regarding Kaapo Kakko’s pre-existing conditions. Smith playing forward seems to have run its course with the trade of Brady Skjei as well.

The last game the Rangers played had Steven Fogarty as the 4C, playing with Lemieux and Julien Gauthier. However Chris Kreider and Filip Chytil were both injured, which forced players like Brett Howden and Greg McKegg into the top-nine. It’s worth noting that Phil Di Giuseppe was also a top-line forward that game.

Let’s assume Kreider and Chytil are back in the top-nine. Fogarty is likely removed from the lineup, that’s an easy guess. Is it that simple as inserting Andersson for Fogarty (assuming a Lemieux suspension removes him from the lineup)? Probably not. After all, the question about Howden’s future as a center is certainly up in the air. Heck, Andersson’s future might even be on the wing.

Andersson can fit into the lineup right now, but it’s a question of whether the coaching staff sees that. The kid’s work ethic was never in doubt, with Quinn questioning his “pace of play.” July’s training camp will answer a lot of these questions.