The New York Rangers needed two points to stay relevant in the playoff race. They knew that. So they came out flying against a Dallas Stars team that usually likes to slow the pace. They got a quick goal in the first, ensuring the Stars would need to open up their game a little bit. They then followed it up with another in the first and two in the second to build an insurmountable lead. Dallas made it interesting, but couldn’t even get it to within one.

The two points came at a cost, as Filip Chytil left the game in the first with a lower body injury. There is no word on the severity of the injury, or what it actually was. But you take the two points and hope it isn’t serious. With no spares, he will either be ready or it will be Chris Kreider and his surprise return. Or a call up that gets flown out very early.

Rangers 1, Stars 0 – Drive the net on the rush, create chances

The phrase “drive the net” is often associated with rebound chances. But driving the net on a rush isn’t always about getting yourself a goal. In this case, F2 and F3 drove the net, taking two defenders with them and opening up a small house worth of square footage for the fourth man in Adam Fox. Artemi Panarin doesn’t miss that pass, and Fox had all day.

The Rangers were lucky to escape their zone on this one, as one rotating Stars forechecker forced a turnover and almost scored. But they escaped thanks to Mika Zibanejad forcing a turnover at the blue line. The Rangers rushed the other way, with Brendan Lemieux driving wide and making a nice pass to Zibanejad for the goal. Take note of Zibanejad’s positioning. Conall said it best here, he stepped outside the post then back in to get his stick free and in a position to shoot.

Rangers 3, Stars 0 – Kakko gets off the schneid

Boy did Kaapo Kakko need this. Jesper Fast forced the turnover along the boards, and then made a great little backhand pass to Brett Howden behind him. That’s what started the play. The Stars were scrambling here, which left Kakko wide open in the slot. Howden with the best pass I’ve ever seen him make, and Kakko had a wide open net. Note Kakko’s finish here, accepting the puck further away from his body for the one timer. That’s something Kakko needed to work on. Let’s see if he sticks it.

Kaapo Kakko scores his second goal of the game and Mika Zibanejad ties a career high in points in 26 fewer games #NYR pic.twitter.com/def303n73U

The Rangers were relentless in the second period, forcing the Stars into another neutral zone turnover. The rush attempt didn’t connect, but eventually Kakko got the puck low and what hands to stickhandle around Bishop and tuck it in for his second of the game.

Rangers 4, Stars 1 – Stars get first even strength goal of the month

Scrambles like this happen in every game and almost always lead to players out of position. For the Rangers, it was three guys on one side of the crease, Zibanejad low on the other side, and no one in covering the man in the front.

Rangers 4, Stars 2 – Remember when the rumors were Cogliano for Dubinsky?

No one picked up Andrew Cogliano after he dished to Miro Heiskanen at the blue line. That’s just poor defense to not pick him up. Too much puck watching on this one.

Sorry for the poor quality gif – best I could find.

This is a little misleading. The Rangers controlled the first two periods when they were up 4-0. But Dallas owned the third, as expected, while the Rangers turtled.

Skater Results – This is what you want to see 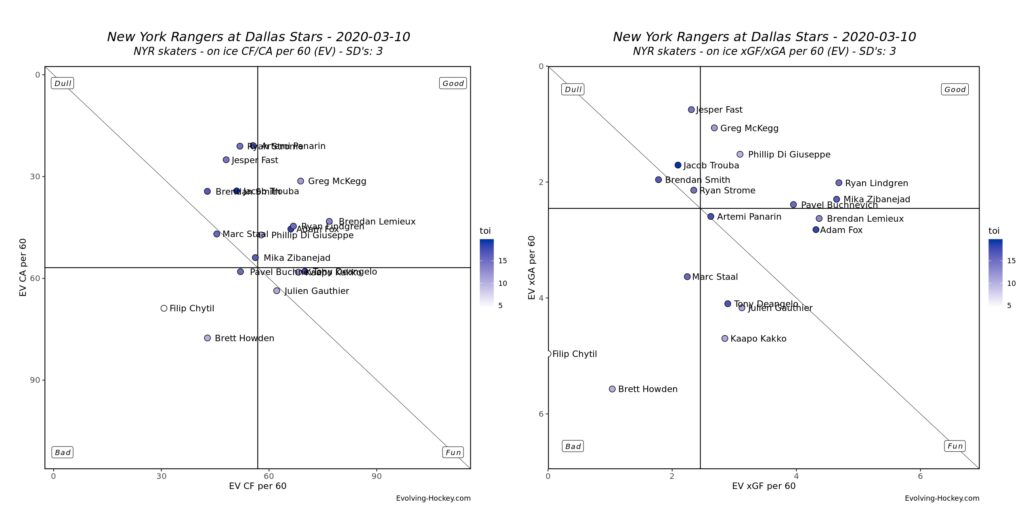 The Rangers were mostly good, dull, or fun in this one, even with the Stars pressing in the third. The first two periods were straight up domination by the Blueshirts. That’s what you want to see.

There’s no time to celebrate, as the Rangers are back at it tomorrow night in Colorado. These were two big points, but the Rangers need two more on this road trip. Colorado is the cream of the crop in the west, but they play a faster paced game that the Rangers like.