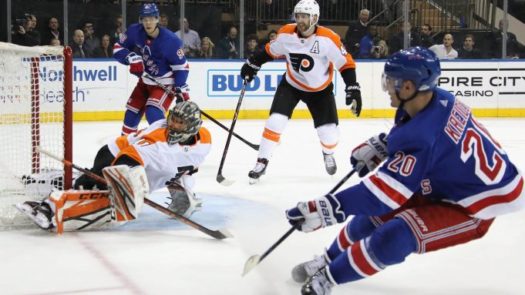 The New York Rangers have not been healthy since the trade deadline. First they lost Pavel Buchnevich for a pair of games, two games that the Rangers won despite being outplayed. Then when they got Buchnevich back, they lost Chris Kreider. The team hasn’t been the same since losing either.

The two wins overshadow the way the Rangers played following the Buchnevich injury, but the Kreider injury is hard to ignore. The Rangers have won just once since that injury, with four losses. Three of those losses were flat out ugly.

One injury shouldn’t derail an entire team, but it did for the Rangers. Unable to generate consistent offense, the root cause is all over the lineup. There is minimal forecheck, gap control is terrible, and the lack of talent in the top-six when missing just one player makes them vulnerable. If anything, the one injury has showcased how thin the Rangers are in scoring talent. At least for this year. After all, first liner Phil Di Giuseppe should have been that example.

The good news is that a roster overhaul isn’t needed – the talent is there, it just needs development. Filip Chytil, Kaapo Kakko, and Vitali Kravtsov represent that talent that should eventually fill in the top-nine, pushing out Di Giuseppe, Jesper Fast, and Ryan Strome. Not a slight to PDG, Fast, or Strome – just younger, potentially more talented players should replace them in bigger minute situations.

The key to a successful team is having talent in the middle-six that not only provides tertiary scoring, but can fill in the top-six in case of injury. The Rangers have some of that talent, it just isn’t ready yet. Just like the Rangers. This year has been a wild and fun ride. They may not be ready yet, but they appear to have the right pieces in place. It’s just a matter of time.