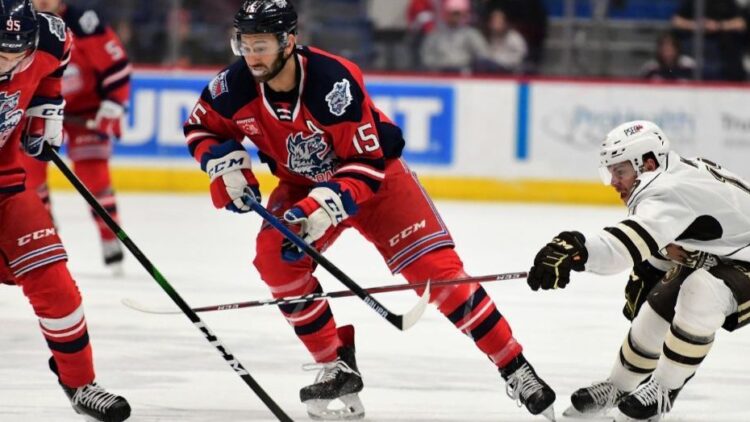 Hartford, CT, March 6, 2020 – The Hartford Wolf Pack suffered its first home shutout-against of the season Friday night, a 1-0 loss to the Hershey Bears in the first of back-to-back games between the two teams at the XL Center.

Vitek Vanecek stopped all 30 shots he faced in the Hershey net, and the teams played more than 54 scoreless minutes before Ed Wittchow scored the only goal of the game at 14:12 of the third period. J-F Berube made 16 saves in the Wolf Pack net.

The game had significant standings implications, as the Atlantic Division-leading Bears (36-18-3-3, 78 pts.) widened the gap between themselves and the third-place Wolf Pack (31-17-6-5, 73 pts.) to five points.

“Every game is important this time of year,” commented Berube. “We have to take the positive out of it. There were a lot of good things we did tonight.”

There were multiple scoring opportunities, coupled with a high pace of play, despite neither team showing up on the scoresheet in the first period. Hartford’s Mason Geertsen provided some energy with a thunderous heavyweight fight against Wittchow at 6:33 of the first period.

“We knew this was going to be an intense game,” mentioned Knoblauch, “physical, and what’s on the line with the standings. We need to play with that presence.”

The second period was an extension of the first – a scoreless period but relentless pressure by both clubs. The Wolf Pack and Bears were tied in shots after 40 minutes as well, at 13 apiece, until the Wolf Pack exploded for 17 in the third.

“The second half of the game I thought we spent a lot of time in their zone,” said Knoblauch. “The effort was there.”

On the winning goal, an aggressive Hershey forecheck led to a turnover in the Wolf Pack defensive zone. Strong cycling below the net created a feed to a wide-open Wittchow at the left faceoff dot, and he blasted a one-timer past the catching glove of Berube towards the top right corner. Brian Pinho and Shane Gersich assisted on the goal.

“We maybe deserved a better outcome,” noted Berube. “Forget about it tonight, move onto tomorrow and get back at it.”

The Wolf Pack and Bears tangle again Saturday night at the XL Center, with faceoff at 7:00. That is Military Appreciation Night, and the team will wear specialty military-themed jerseys. Those will be auctioned off during the second intermission, with a portion of the proceeds benefitting local veteran and military organizations. Also, the first 2,000 fans into this game will take home a free Wolf Pack reversible drink koozie, courtesy of CT-DOT.