The Rangers had another good process game last night against the Wild, controlling the quality of play while not conceding much quantity. Down 3-1 in the third, they fought back and eventually got the equalizer with one minute remaining to force overtime. Eventually the Rangers would win in a shootout because Panarin is a cheat code.

Pavel Buchnevich continued his hot streak with another goal, while Artemi Panarin continued his trek to 40 goals. Alex Georgiev had a solid game, if unspectacular. He didn’t steal anything but he kept the Rangers in it so they could tie it. He held his own in the shootout to secure two points.

GOAL. Ryan Donato with a beauty to open the scoring. pic.twitter.com/Kj9vdDmtBX

This is a bit of a rough neutral zone turnover by Phil Di Giuseppe. Ryan Donato picked up the puck and skated through open ice before putting a backhand off Brady Skjei and by Alex Georgiev. Backhanders are tough to read from the getgo, let alone with a deflection.

Two center ice passes and an over aggressive Alex Stalock. Artemi Panarin scores this in his sleep.

Good pressure and passing by Minnesota, but the half block attempt by Filip Chytil is what fools Georgiev here. Either block it or don’t.

There’s not much you can do about this deflection by Jordan Greenway.

Good passing here on the 6-on-5, and a great deflection by Mika ZIbanejad. I don’t think there was anything the Wild could have done on this, it’s a numbers game.

Very dull game with not much red/blue in danger areas. The Rangers have more red than Wild blue, so that’s good. 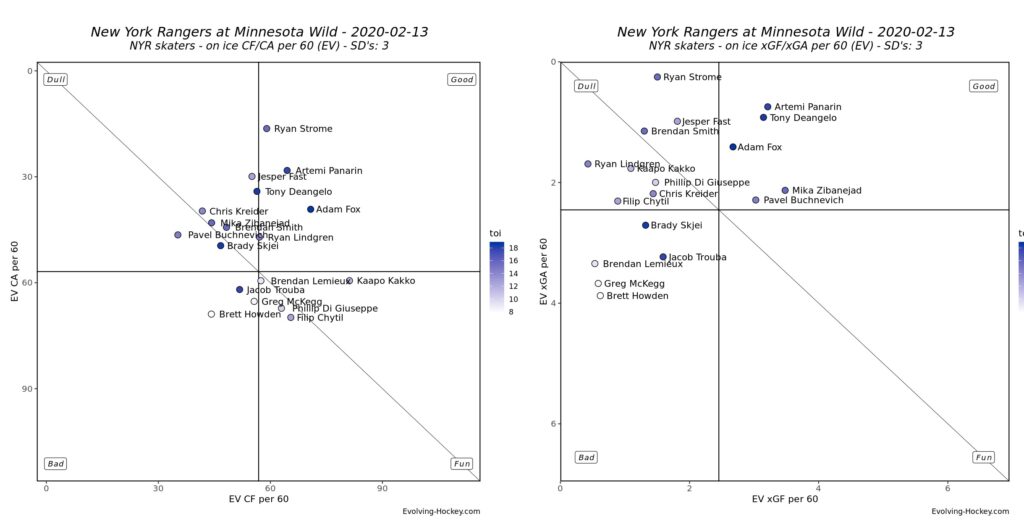 The Rangers definitely controlled quality, but that’s loosely defined since there wasn’t much to work with. A rather dull game with an exciting finish. Yet another rough outing for the fourth line.

The Rangers seem to like dramatic comebacks this season. I don’t have an exact count, but it seems there are a lot of these third period comebacks to force OT games this season. They can take this momentum to the depleted Columbus Blue Jackets tomorrow night to wrap up the back to back.