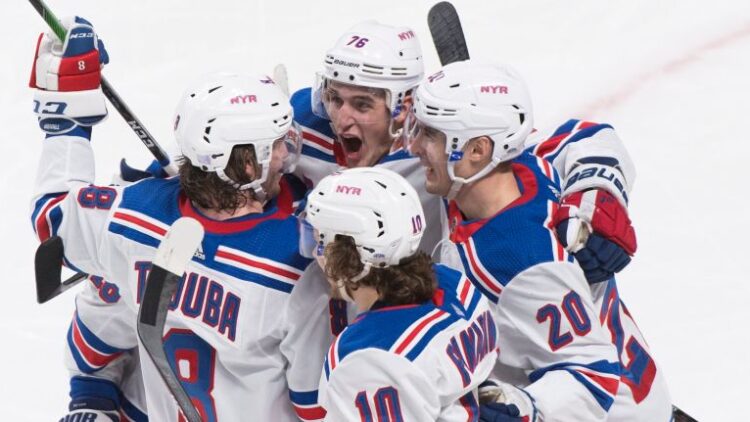 Going into this season the Rangers were going to be in one of three positions (for the sake of simplicity) heading into the trade deadline:

Now most fans, analysts, and models agreed that option three was a likely long shot, and that has rung true. The real kicker of this season is the turnaround that has been documented ad nauseum around these parts and on twitter. Starting in mid-December (Game 31, 12/12/19 to be exact), the underlying performances of the skaters went from tracking to be historically bad to suddenly NHL average. This is all to say that heading into December it was looking like option one was going to be an easy choice for Gorton. Since Game 31, however, option two is possibly looking more and more likely. 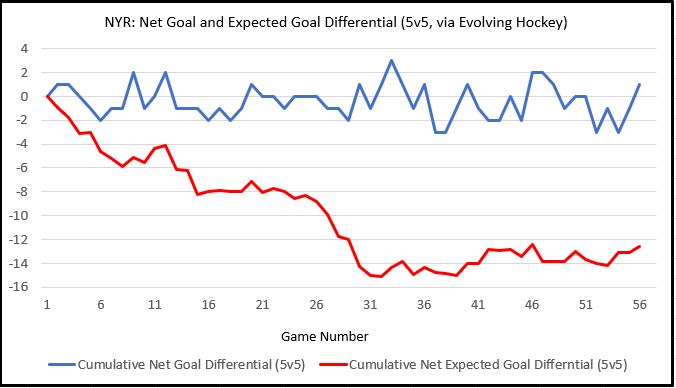 While the team was hovering around an even goal differential at 5v5 due to top-10 shooting and goaltending, they were bleeding shots/chances/expected goals at a Buffalo Sabres tanking level (not good!). With a few key changes (Hajek out, 3 established centers, and less of the 4th line), NYR has been an average to above average NHL team for 25 games despite their goaltending having what will likely be their worst stretch of the year. While I would still argue that injuries did most of the decision making for Quinn & co., they have stuck with what has worked well (especially K-Z-B), so this should be considered some level of progress in the rebuild.

That all said, there are two trends as of late that NYR must experiment with once the deadline is past. The first trend has to with what has been the de-facto top-pair for NYR during this stretch of better play: Brady Skjei and Jacob Trouba. 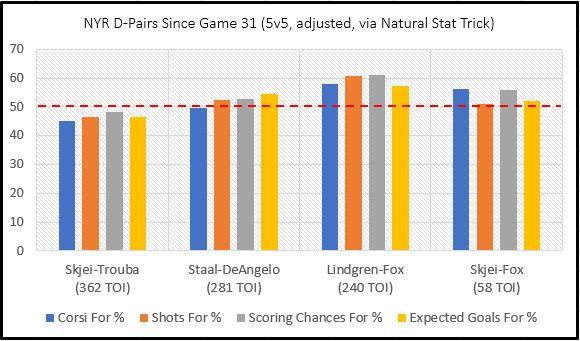 In the last 25 games played, Skjei & Trouba have gotten the most shared 5v5 ice time in all but six of those games (five of the six coming in the last eight played). Overall, their performance has been average at best. Yes, by playing more TOI they are of course playing higher-TOI (aka better) competition, but the takeaway here is that the Rangers must try to find workable complements for Skjei and Trouba. The odds of either of them being dealt at the deadline are extremely low, so come post-deadline it will be time to try off-hand pairs and/or shuffle the roster with an option from Hartford. As an aside: Lindgren-Fox has been very effective during this stretch, and since seeing more TOI in the last four GP they’ve also done a fine job of controlling play for NYR.

I know NYR is past the kid line as it became less effective but I just wanted to check to confirm my suspicions on who the weak link was on that line.

120 Career GP and Howden has done what, exactly, to show he can be effective in the NHL at this juncture? pic.twitter.com/gRHFGYOw5a

The second trend relates to the third line. Since Zibanejad’s return, Filip Chytil has been solidified as the 3C with a smattering of wingers at his side. While the kid line had an admirable start, its effectiveness waned after about 5-6 games. Many have been noting that post-All Star Game, Kaapo Kakko has looked a bit more engaged in his play, and this is generally true as he’s creating individual chances at a 40-50% higher rate than before (per Evolving Hockey, ixG/60 rate). This leaves us Brett Howden, who has continued to struggle regardless of who his teammates are in controlling play despite moving to the wing. The takeaway from this is twofold. First, Howden shouldn’t be given much leash on the fourth line and I’d argue there may be a forward in two or Hartford that deserve a look over him. Second, Phillip Di Giuseppe has not looked out of place on a line with Chytil & Kakko, so I would very much welcome that experiment to continue with him or another Hartford forward.

While both of these trends aren’t seemingly major issues, they both feed into the decisions to weigh offers for the deadline and how the Rangers want to position their priorities for the offseason. This of course assumes that NYR want to actually compete for the playoffs starting next season.

In a league that pays for scoring, Tony DeAngelo will be paid much more than his 925K this season (whether via arbitration or a longer deal), while also being a potential complement to Skjei or Trouba. Filip Chytil’s consistency may allow the Rangers to sell high on Ryan Strome who is playing at a newfound (albeit still slightly inflated) level. Brett Howden’s flatline play and diminished role expose the need for more bottom six depth. And finally, on the wing, Chris Kreider is back to playing at a first-line level since being reunited with Zibanejad and Buchnevich. If he’s shipped out, there won’t be a UFA akin to him (or Panarin) that’s able to fill that void next season, so it would likely come down to another trade or a developing player to replace that positive impact.

The conversation around the roster and the play of the Rangers will likely be a different tone at this point next month. For me, a strategic sell-off that nets NYR assets without hampering their ability to compete next season should be the goal. There are many ways this could be accomplished, some straightforward and others wildly creative. And while it took 30 games and a few injuries to find their way, the progress the Rangers have shown is encouraging and should not be ignored.

P.S.: let’s not forget that Lindy Ruff should probably still be let go at the seasons end.