A look at ice time trends for the Rangers

Ice time breeds improvement. Improvement is needed for a rebuild to be successful. Ice time is also earned with good play – but sometimes it isn’t earned at all. That’s 30 words that basically says ice time is important but there is no measurable way of judging if a player has earned it in the coach’s mind. All we have is inference and actual ice time stats.

A major complaint, especially in a rebuild, is that the kids need to have ice time. It’s something that was a focal point of the Lias Andersson debate, but has now shifted to the Kaapo Kakko debate. There is some credence to the argument that ice time is needed for development, but it is not an argument without holes. After all, feeding Brett Howden ice time didn’t improve his play until he was shifted to the wing. Giving Libor Hajek top pairing minutes was one of the worst decisions of the rebuild.

It’s also worth noting that average TOI doesn’t necessarily mean anything for a team like the Rangers. This is a team that was always going to lean on veterans at first while easing kids into the NHL rigors. Eventually the kids would get more ice time, but as they earned it. 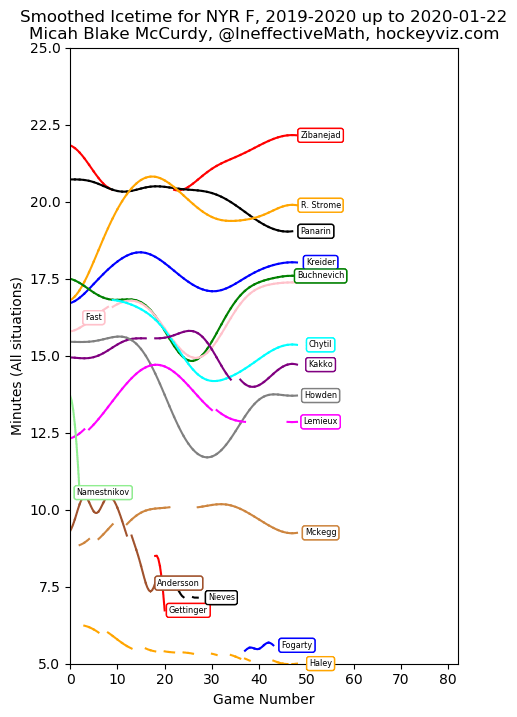 That said, a team like the Rangers is still going to give its top players the most ice time. While one might look at Kakko’s average ice time, you look at the players above him and there is no real argument against the ice time he’s getting, especially as he’s struggling mightily. KZB and SPF (I just realized as I was typing this out that the sunblock line exists…) have 100% deserved to be in the top six in ice time among forwards. I don’t think there’s any credible argument that says otherwise.

The rest of the forwards certain certainly play out in an interesting manner. For starters, I am a little surprised that Brendan Lemieux’s ice time took such a steep dive before his injury. Brett Howden’s ice time increased a decent amount after his move to wing. Filip Chytil has solidified himself as the 3C. I am certainly very interested to see how the Lemieux-Chytil-Kakko line looks from now through the end of the season.

As for the fourth line, well it would be wonderful if the Rangers actually used their fourth line. 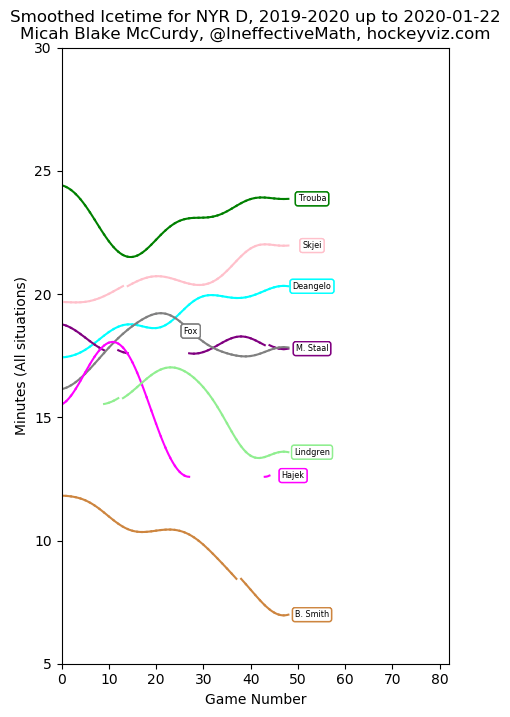 Ignore Brendan Smith, since apparently everyone except the Rangers realize he’s a defenseman. But this ice time flow shows that as players earn their ice time, they get more. Case in point: Tony DeAngelo. Also worth noting that as soon as Hajek was injured –which coincided with the Rangers’ improved play across the board– DeAngelo’s ice time steadily improved.

The only concern here is that Marc Staal gets about the same ice time as Adam Fox. Clearly a concern, but I think that’s more a product of pairings than anything else. Fox is with Ryan Lindgren, and Staal with DeAngelo. It is worth noting that David Quinn does play Fox/DeAngelo a lot more when trailing.

The Rangers, on the other hand, do not like to give their young players (good or otherwise) important minutes. pic.twitter.com/qCXAZruFCD

Which brings me to this, which is the inspiration behind this tweet. This is basically a quick ice time plot of ice time in critical situations (note: close to the end of the game) and the age of the player getting the ice time. Upper right means old and playing significant minutes. Lower right means old and playing filler minutes. Upper left is young/important minutes. Lower right is young/meaningless minutes. Anything above the 0% line means that they are generally playing at least somewhat meaningful minutes with the game on the line.

With that out of the way, the Rangers seem to rely on just eight players when the game is close: Trouba, Fast, Kreider, Panarin, Staal, Strome, Zibanejad, and Lemieux. There’s a decent amount to unpack here, but given that these are season long numbers, and the Rangers spent the majority of the season trailing until recently, the Blueshirts are generally playing from behind and putting their top offensive players out there. Staal is out there because he’s probably the only consistent defenseman playing with a lead.

But again, trends matter, and unfortunately we don’t have the above in a season-trends flow. I’d venture a guess that we will see more young guns getting important minutes as the season continues into the second half. Specifically I expect DeAngelo and Chytil to climb here a little bit.

Considering the big stink made about ice time, the Rangers are doing what appears to be the right thing. Their best players are playing. Their young players are being sheltered. This isn’t necessarily bad. If anything, it shows consistency with the past few years of the rebuild. Ease in the kids while the veterans eat minutes, and eventually transition the kids that earn it into bigger roles. It’s not going to be sudden, but it’s going to happen.