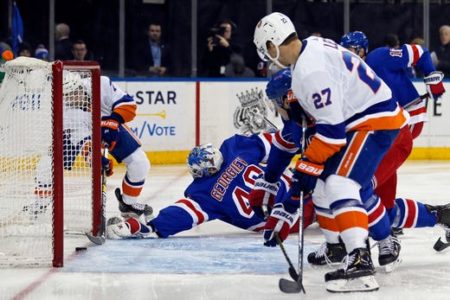 The NY Rangers were without Artemi Panarin last night for the first time this season, and it showed in the 4-2 loss to the Islanders. The bread-less Rangers actually controlled the game, outshooting and outchancing the Islanders all night. But a combination of bad luck and a silly offside challenge doomed the Rangers. They did make it interesting with two late powerplay goals, but overcoming a four goal lead in the third is tough to do.

This is a loss to a rival in a game that actually meant something, in the sense that this rivalry seems to have renewed blood recently, but there was a lot of good in this one. The Rangers controlled the game against a Barry Trotz team, which is tough to do. They also controlled the expected goals, which is exceedingly difficult to do against a Trotz team. Sometimes, these games happen.

Josh Bailey scores on the power play to make it 1-0 Isles after that bad penalty by Ryan Strome. Rianne Ströme would never pic.twitter.com/UJHqZIJnK6

In what was going to be a theme for the game, this was a rough one for Ryan Lindgren. Alex Georgiev made the initial save off a deflection in front, but the rebound went off Lindgren’s leg and in.

Right here. Two guys on the puck and no swivel head. That’s on the forward, I think it’s Howden, to know someone is coming off the bench. Beauvillier walked to the hash marks before someone picked him up. pic.twitter.com/ehP23A1Apa

This was really the only goal you can blame on a defensive breakdown. The Rangers, on the penalty kill, almost scored, but 8 seconds later got scored on. The main breakdown here is Brett Howden, rushing back after the chance, not having his head on a swivel and catching the change the Isles made. Anthony Beauvillier had all the time in the world to get the puck, and he walked in to the hash marks before beating Georgiev.

Anders Lee scores to make it 3-0. Hit off Lindgren and in pic.twitter.com/T7w1VubZcm

Another goal off Lindgren, this time off his skate. Just some bad luck.

Don’t get fancy in the defensive zone. Brady Skjei kicked it and missed, and the Rangers couldn’t recover.

Pavel Buchnevich scores a power play goal to get the #NYR on the board, Adam Fox with the primary assist pic.twitter.com/j6KYeI9IM2

Solid deflection by Pavel Buchnevich on that one. Gets that monkey off his back.

Mika Zibanejad threw the puck on net, knowing it wouldn’t be a goal. The Isles blocked the shot but it was Chris Kreider in front for the goal to make this interesting.

The Rangers had a whopping 63.29% shot attempt advantage and a 56.84 expected-goals advantage. Sometimes luck goes against you.

A lot of good. Some focused bad. Overall good process, as mentioned above. You can’t look at this game and say the Rangers didn’t play well.

This is a good process game that you can build on, but it will be ten days before we see if the Rangers continue the past six weeks of this good process. It’s the All Star Break and the bye week, so no games until then. I hope you are all prepared with other things to do. But don’t worry, we will still have things to write about.