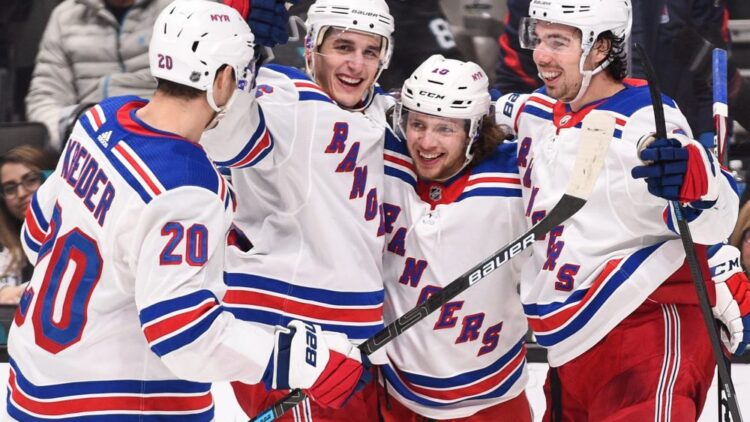 It’s amazing to say this, but the 2019-2020 NHL season is already halfway through. The Rangers sit around where we expected them to be, pretty far out of the playoffs with an explosive offense, optional defense, and goaltending that does what it can do. The explosive offense and solid goaltending keeps them competitive most nights, but the inability to limit quality and quantity against hinders their ability to be a consistently good team.

There’s a lot to unpack with the top-six, but they’ve more or less carried the team. The top-six has consistently included Artemi Panarin, Ryan Strome, Chris Kreider, Pavel Buchnevich, and Mika Zibanejad. The sixth forward has rotated between Jesper Fast and Filip Chytil, with Fast getting ore time recently. So let’s keep him in the top six for the sake of this post. Deal? Deal.

The lone All Star (so far), Panarin has been everything that has been advertised. Panarin leads the team with 22-33-55 in 41 games and he makes this offense tick. Not only is he producing points, but he’s making others significantly better. That’s what you want from your $11 million player. He’s producing points, driving play, and making his teammates better. Grade: A+.

This is going to be the controversial grade. Strome has been nothing short of a steal for the Rangers since they swapped Ryan Spooner for him. This season Strome has not only been close to a point per game at 11-26-37, but his metrics have been significantly better than last season. It’s really hard to argue with the success he’s had this year, even if you question his long-term future with the team and his production without Panarin. You have to just hand it to the guy, as his shooting percentage has dropped but he’s kept producing points. Not much else to say here. Grade: A.

Kreider is an interesting litmus test for the Rangers and their plans for the future. Kreider is still the Blueshirts’ best net-front presence, and he’s still a matchup nightmare with his speed/strength. He’s also very streaky, but when he’s on, he’s on. He’s sporting a 12-14-26 line in 46 games, so he’s in line with his career averages too. Kreider is what he is at this point – a 20-goal, 50-point winger. Much like Strome, regardless of where you think his future lies, he’s been what you expect thus far. He hasn’t exceeded expectations, but it’s fair to say he’s met them. Grade: B.

Buchnevich is another streaky player, but unlike Kreider we simply don’t know what to expect from him as far as points go. He’s had a huge scoring drought lately, which a lot of folks are pointing to his streakiness as the root cause. However Buchnevich is still doing the little things right while he’s a little snake bitten. I think that’s an important point to note here, as we want to see improvements away from the puck when the puck just isn’t going in the net. Buchnevich has shown significant improvement there, and if the puck ever starts going in while he’s on the ice, we should see the points start to come back. Grade: B.

The other forward at over a point-per-game, Zibanejad has a line of 16-15-31 in 28 games this season. He’s been the 1C the Rangers have sorely needed all year, and he has basically clicked with whatever wingers he’s been given. Lately he’s been reunited with Kreider and Buchnevich, and the underlying possession/expected-goals numbers are there. Zibanejad is a huge driver on that line. He really rounds out this top-six. Grade: A.

As mentioned above, Fast has been a top-six forward this year more often than not, so he’s the safe bet to include here. Fast is the Blueshirts’ utility man, doing everything the club asks of him. That said, he’s not a top-six forward, with a line of 6-8-14 in 41 games. Yes that has a lot of bottom-six time in it as well. Fast’s inclusion here highlights the need for a true top-six winger. As a top-six winger, he doesn’t fit the bill. I’m having trouble grading him – do I grade him on his top-six performance? Or his overall performance? Since this is a top-six post, I think I need to grade him as such. It lowers his grade as a top-six, but that doesn’t mean his overall season performance is bad. He’s still the top defensive forward on this team. Top-six Grade: C. Overall Grade: B+.