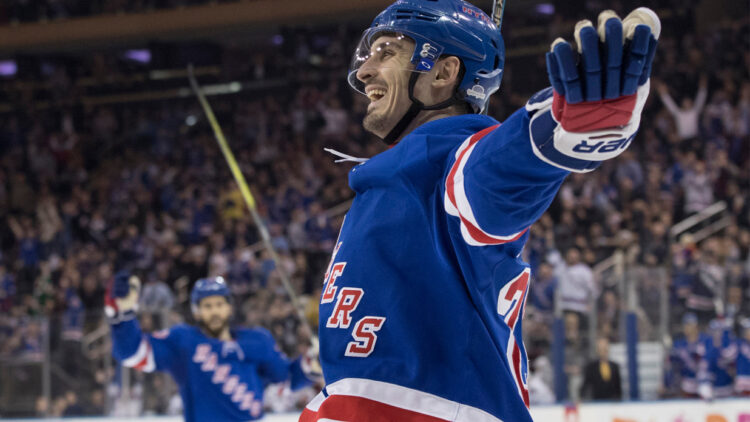 Happy Monday BSB faithful.  I hope you and yours have had a wonderful holiday.  Back to the mini-grind before NYE for a day or two, I suppose.  This afternoon, I wanted to introduce you to a new concept here at BSB.  It’s called “BSB Debates…”, which will put two of our writers (or more, if we decide to get crazy!) on opposite sides of a hot button Rangers’ related debate and they will try to make their case for you, our dear readers.

Our first topic up is becoming more relevant by the day: whether or not to trade Chris Kreider, or look to re-sign him to an extension.  Our inaugural debate will pit myself versus Becky, with yours truly taking the “re-sign” position and Becky taking the “trade” position.  As always, the “right” decision will be highly dependent on contract demands, trade return, etc., but it’s fun to argue about it none the less.  Be sure to vote in the poll and  drop your thoughts in the comments.   If you dig this concept, it was all Becky’s idea, so be sure to direct any and all props to her (@bhabs37 on Twitter).

Justin: So, Becky. Kreider is a pending UFA who is likely to command sizable contract and after the Taylor Hall trade, should be in high demand from the likes of Boston and Colorado.  Trade or re-sign?

Becky: Ok, so Kreider turns 29 in April and will likely not sign for less than 6 years — meaning we get saddled with a contract we probably regret in 4 years.  I say trade.

Justin: I agree, given his market value is probably 6-7 years at 6.5-7m per year, the contract will probably look ugly for the last two, but here are some issues I think tip it in “team re-sign’s” favor: 1. Having productive veterans to help with the kids coming up, 2. the overall cap hit should be a much smaller percent 4 or 5 years down the road and 3. I don’t think the return will be worth the value of losing the production.

Becky:  I would argue that you have even more productive veteran leadership in your legit stars – Panarin and Zibanejad – along with less expensive guys like Jesper Fast, who has quietly been with the team for 6 years now.

On the flip side of point 2, he will likely request a NMC.

For 3, how do you quantify that? What is “enough return” for a streaky Left (only) winger who is quietly getting older, who uses speed and physicality to score instead of finesse?

Justin: Fair points all around, especially re: Panarin. However, I would argue that since Fast is a pending UFA, same as Kreider and Zibanejad will be 2 years from now, you aren’t necessarily ensuring that leadership.

I agree that the NMC is problematic, and maybe that is the Rangers line in the sand for giving him the money/term he is looking for.

It’s very difficult to quantify that value in concrete terms, but I would wager the return at the deadline won’t significantly alter the trajectory of the rebuild and the team gets even thinner on the wing.

Becky: I think he’s definitely valuable, and if you can sign him for 5 years I would jump at the chance. But we could use some help with perhaps a high prospect at D or something to round out the bottom six.

I think finding a winger would be easier than for example a center.

Even Howden – bless his soul – is proving to be decent on the wing.

Justin: I agree with finding a winger being easier than a center, and if the return for Kreider is a top-6 center prospect, I’ll drive him to the airport myself. I just have a hard time sending a .6 ppg player in the prime of his career out of town for a late first rounder and a mid-level prospect.

Obviously, it all depends on the return and the contract demand, but I can’t escape the feeling he is more valuable on the team than in a trade.

Becky: Yeah, I would want good return on CK. I’m mostly concerned with how they structure an extension/new contract if he takes it to free agency.

Justin: Agree with that 100%. Any concluding thoughts?

Becky: If CK keeps producing then there’s really no way this could go wrong — and in a perfect world, we can re-sign him for 5/$6.5m.

So, there you have it.  There is obviously quite bit of overlap in how Becky and I see the situation, but there are a number of variables and good and bad outcomes on both sides.  What do you all think? I’m only giving you the two options because “trade if the return is good” or “re-sign if the terms are favorable” is a boring cop out.  Enjoy your week everyone!