The Lesson of Lias Andersson 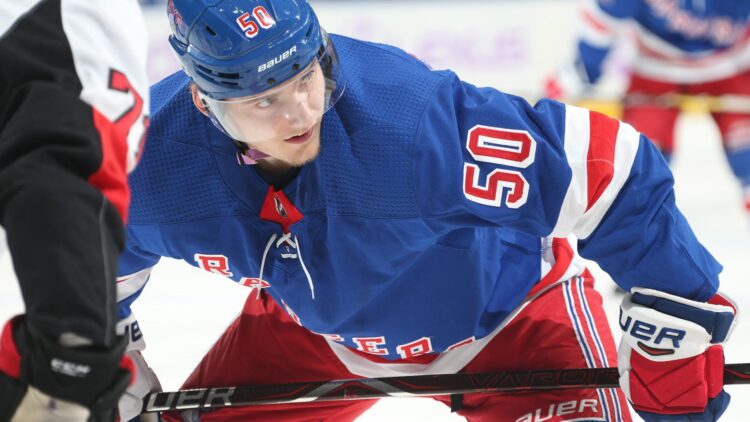 High draft picks are odd things.  Obviously, no player drafted in the top-10, or drafted at all, for that matter is guaranteed to go on to a long and successful career.  However, there is quite a bit of pressure in drafting that high, as fans view it as compensation for a poor season or a prolonged rebuild.  High draft picks are currency for the price of future success.

Philosophically, I have always been of the mind that you should always shoot for the highest possible ceiling with any draft choice.  Clearly, if that upside carries an irresponsible amount of risk, that needs to be taken into account, but the general rule would be to shoot for moon.  Now, it is my decision to make and not my career on the line, but certainly the energy of a possible superstar as your shiny new toy helps assuage the fanbase and helps them buy in to your vision of the future.

This is the main reason why I was never a huge fan of the Lias Andersson pick, especially in the context of the trade that brought the pick over from Arizona.  I do understand it, though.  The first round of the 2017 Draft is ugly after the top 6 picks.  I can only assume that the thought process was to get the guy who had the highest probability of being a productive NHLer, even if his ceiling wasn’t that high.  Not the way I would have handled it, but I get it.

Now, a little over two years after being taken as the number seven overall pick, Lias Andersson has requested a trade.  It has obviously not worked out in New York, for a number of reasons and it is time for both player and organization to move on.  Dave provided a detailed analysis of the moving parts of the situation yesterday, so I’m not going to rehash those here.  I do want to discuss the lens that these development issues are examined through and the allocation of responsibility in certain contexts.  This was also very present in the Vitali Kravtsov situation.

The most important thing to remember is that for the vast majority, if not all of us here, hockey is a game, a pastime and a passion.  For these guys, it’s a profession.  An organization is an employer, like any other.  The circumstances by which that employee finds themselves on the payroll varies, but the organization is a workplace, just like yours and mine.

Our ties to the organization come from a very different place.  They come from childhood memories, families, spouses and children.  They are a sense of community and self-identity.  They come from a place of mystical allegiance, a sense of destiny and membership to the passion that drives its fanbase.  This is the biggest disconnect in the world of modern professional sports; we feel that the players have to be as devoted to the franchise as the fans are.

For the player, the calculus is different.   You have a finite amount of time to play this game and make a meaningful living, especially for players who chose to forgo education to pursue a professional path in hockey.  I know no one is lamenting the earning capacity of professional athletes, but younger players need to establish themselves as earners to cram 40+ years of professional wages into maybe a 10-year career.  That is always going to be their priority, and rightfully so.

The expectations for development and player growth also diverge along these lines.  When you are a young amateur player learning the game, you are instilled with certain expectations of your development.  Humility, coachability, hard work, earning your spot, etc.   There are dues to be paid and you have to outwork everyone around you to take your game to the next level.  These are virtuous lessons for young people to learn, and if I was trying out for my local high school team, you would be absolutely right.  However, by the time these players make it into the professional realm, the equation changes. Motivations change, economics change and most importantly, the relationship between the player and the power structure changes.

In the amateur environment, the expectation is that all things are viewed equally.  The best players play, the cream rises to the top and you are rewarded accordingly.  The worst-case scenario you tend to run into is a coach or athletic director-type who doesn’t like your game or doesn’t give you a fair shot.  This happens all the time in amateur hockey, and most of the time, parents move the child into a move favorable environment for their development and continue to look for the best opportunities.

In the pro’s, you confront these same perceived worst-case scenarios, compounded with the fact that the organization is actively trying to limit your earning potential (within reason) and you don’t have the ability to seek out a better opportunity if you find yourself in a difficult situation. The other important thing to remember is these players, at least at the beginning of their careers are still kids in most relevant ways.

This is why they have professional teams backing them up.  Agents, managers, trainers, etc., who are all looking out for the well-being and professional development of that player. They advocate for the best opportunity on the player’s behalf and they understand the game within the game.  This also creates perceptions of player behavior or positions on disagreements that may cloud where the player is actually coming from.

Back to Lias, as an example.  There has been a chorus of voices talking about his entitlement and refusing to accept his limitations as a player and quitting when the going gets tough instead of picking himself up, making the best of the situation and trying to improve.  Let me reiterate, that would be an appropriate response for a 14-year old who was just cut from the high school team.  It’s just different at this level.

Let me be clear, the Rangers don’t owe Andersson anything, just as Andersson doesn’t owe the Rangers anything.  However, the Rangers owe themselves. They used competitive capital to acquire this player that they cannot get back.  They may have been uninspired by the options out there, but when you use the number seven overall pick on a player, you damn sure better find out what you have in him.

There are certainly things that you need to look for in a player’s development to feel confident in green-lighting more responsibility, a call up or more ice-time.  However, there comes a point where you need to just take the training wheels off, especially in a rebuilding year, and let that player sink or swim.  If he sinks, you are going to take heat for taking the player in that spot, but at least you can feel like you exhausted all possibilities.

I guess that’s why this situation with Andersson feels so frustrating.  You have an organization that pissed away a high pick without seeing what they had.  They were so focused on making him “earn it” within the framework of their expectations that they abandoned the organizational need to realize value from their asset. If you can’t break away from trying to force “maturity” on teenagers, especially from different countries, cultures and experiences, the organization will undoubtedly suffer for it, even if portions of the fanbase and hockey community think it is the right thing to do.

There is no question that developing good habits and a professional attitude go a long way in helping facilitate future success; and those traits should absolutely be prioritized and encouraged by the organization.  At the end of the day, though, this is a business and you have to manage your assets responsibly.

So, while Lias Andersson has not developed as we had all hoped, he is well within his rights to seek a better opportunity to earn a living and maximize his career trajectory. It has become abundantly clear that the Rangers organization is not going to let him sink or swim in a meaningful role, which is undeniably poor asset management in a rebuilding cycle.  Vilify Andersson for not being good enough if you must, but enough with the farce that he owes his employer any more devotion than you owe yours.

The Rangers organization has displayed a pattern of this type of youth development for years now and it has wasted enough assets.  A philosophical overhaul to the development model for young players is long overdue, and Lias Andersson is just the latest wasted opportunity.