The Rangers can’t, and won’t, continue to win this way 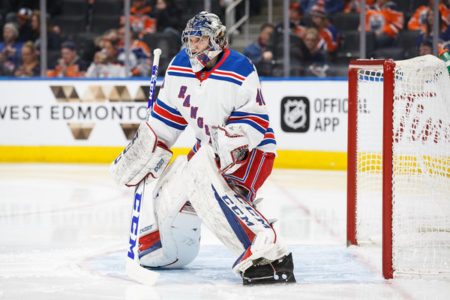 The Rangers won 5-0 last night. On paper it’s a solid win. You can’t complain about a 5-0 win, or at least it’s very difficult to complain about a 5-0 win. It is, however, worth arguing that if not for Alex Georgiev’s heroics, the Rangers would have –or should have– been down big after the first period where they were outshot 17-7, with many of those shots being high quality chances. In the end, Georgiev made 38 saves.

This has been a trend of late, and it reminds me of the 2015-2016 season. If you recall, the first two months of that season were the Henrik Lundqvist show. The Blueshirts went on a nine game winning streak through November. Then reality hit and they went 5-12 from Thanksgiving through Christmas. Bad process reigned supreme as stellar goaltending came back to normal and unsustainable shooting regressed back to around 9%, which is what the Rangers shot at that time (still above league average).

I say this not to put a damper in the 5-0 win. It should be celebrated. I say this as a cautionary tale that Georgiev won’t stop 38 shots every game. Or 33 against Montreal. Or 45 against Columbus. He will come back down to Earth. Let’s run through the last four games:

But let’s play with top-end goaltending numbers for the league. A .920 SV% on 118 shots is 108 saves in those three games. That’s six goals at some point. Distribute them evenly for the sake of this exercise, and the 2-1 stretch is now 1-2. Makes you look at things differently, right?

I’ve been a big proponent that skill and goaltending matter, and that a skilled team can survive with a sub-50% xGF% or CF%. It’s something I’ve been shouting from the rooftops for a while. Skill matters. The Rangers have high end skill and elite level goaltending. That means something. Even elite level goaltending will come back down to Earth. Not at an .880 SV%, mind you, but at that .920 SV%.  When that happens, and it will, we won’t have this run of Prince Alex.

So while enjoying these wins is a must, identifying what is wrong and what needs fixing is also a must. The overall process is unsustainable. We’ve covered what the issues with the system are, and I’m not going to re-hash it. For anyone watching last night’s game, you saw that the Rangers were caved in. They took advantage of their opportunities, but what if Georgiev had a game meant for a mere mortal? Do they have that extra jump in their step to get two goals in 14 seconds? For every argument that says they have the mental capacity to find ways to win, there’s another argument about whether they would have been able to find those goals if already down 3-0.

The process does matter, and without beating a dead horse, the process hasn’t been good all season. It is very concerning that the coaching staff seems to think this is an acceptable way to win in this league. If and when the goaltending comes back down to above-average levels, the wins will stop coming too.