The New York Rangers outlasted the Columbus Blue Jackets last night on the back of Alex Georgiev’s 45 saves, surviving with a 3-2 win. The Rangers were thoroughly crushed for most of the game, with Columbus controlling the shot attempts and scoring chances, but it was Georgiev who stood tall as the Rangers’ skilled players got them their 3-2 win.

Artemi Panarin scored the eventual winner against his former team as the Rangers took advantage of a few mistakes by the Blue Jackets. Joonas Korpisalo allowed three goals on just 19 Rangers shots as the Blue Jackets inability to finish and stop pucks again cost them.

This was some bad luck, as Brady Skjei’s stick broke, leading to the rush up the ice. Cam Atkinson’s shot hit off Jacob Trouba’s shin pad, changing directions on Georgiev. The shot was going low blocker and wound up beating Georgiev five-hole.

Rangers tie it up with 8 seconds remaining in the period.

The simple breakdown here is that Columbus wound up with three guys behind the net. Upon further review, Kaapo Kakko was able to get the puck to Mika Zibanejad because Nick Foligno’s stick hit the post as he was going for the loose puck, giving Kakko the space. Zibanejad made a Mats Zuccarello-esque pass to Brendan Lemieux in front for the goal.

Jacob Trouba scores on the power play to give the #NYR a 2-1 lead. Adam Fox tallies the primary assist. Ryan Strome, who was shifted to PP2 for this game, with the secondary assist. pic.twitter.com/dEboq4oWJn

This time the Rangers got some luck, as Trouba’s shot hits off Seth Jones’ stick and by Korpisalo. 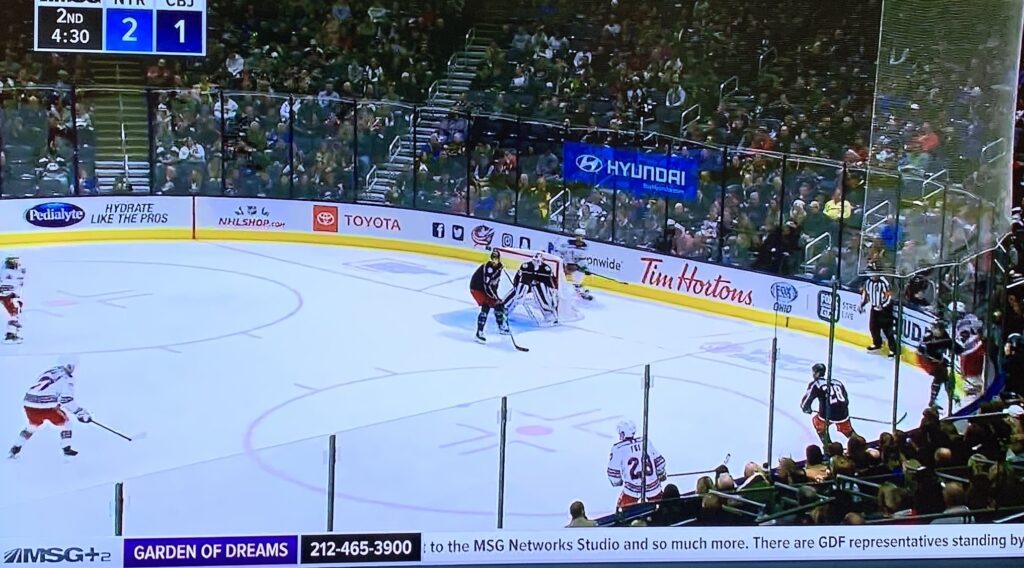 That’s three Blue Jackets on one side of the ice and no one in front to cover Tony DeAngelo and Panarin.

This is basically what you expect to see when Columbus gets 63% of the shot share.

Well there’s Adam Fox and a positive shot share. I guess we should appreciate the fourth line too, since they were at least dull and not bad. But yeesh.

Take the points and run back home to face Montreal tomorrow. That’s all there really is to this one. The Rangers will perform as their goalies are able to bail them out.