The Rangers jumped out to an early lead against the Bruins, looking good and holding their own and scoring two of their own. But then the mistakes came, particularly when the Blueshirts botched a 5-on-3 powerplay and gave the Bruins life. That was the turning point, as the Bruins scored three in a row to take the OT win.

Both 5v5 goals against the Rangers were a product of some bad luck, but a team as good as the Bruins makes their own luck. Henrik Lundqvist was great throughout, but there’s only so much he can do with that fire power coming his way.

Just after the power play expires, Buchnevich scores to give the #NYR a 1-0 lead. DeAngelo and Trouba assist. pic.twitter.com/c5L57VS4nJ

It looks like the Bruins forgot about Pavel Buchnevich in front on this one. There were two Bruins near him but neither put a stick on him. Great pass from Tony DeAngelo and a solid screen from Brendan Lemieux.

Filip Chytil scores to give the #NYR a 2-0 lead pic.twitter.com/oCBLj5RRSu

What a bad turnover by Danton Heinen, springing the rush for Artemi Panarin and Ryan Strome. Jaro Halak made the first save but the rebound went right to Filip Chytil for the goal.

The #NHLBruins first goal has officially been credited to @kurals9. Assists to @JDebrusk and @1996_Carlo. pic.twitter.com/FJZIig52gZ

This is a little rough for Hank. The shot in got deflected twice and went off the post. He dove to try to cover before the rebound could be banged home, but knocked it in himself.

Another bad luck goal. This time the centering pass and subsequent shot by David Krejci goes off Mika Zibanejad and right to David Pastrnak who one-times it home.

Overtime is crazy sometimes. Pastrnak is very good, and Krejci had the open net here.

As a team, the Rangers had a strong game, especially when you consider they were up against the Bruins. They got good chances, but in the end Boston was just better. That’s how the cookie crumbles. 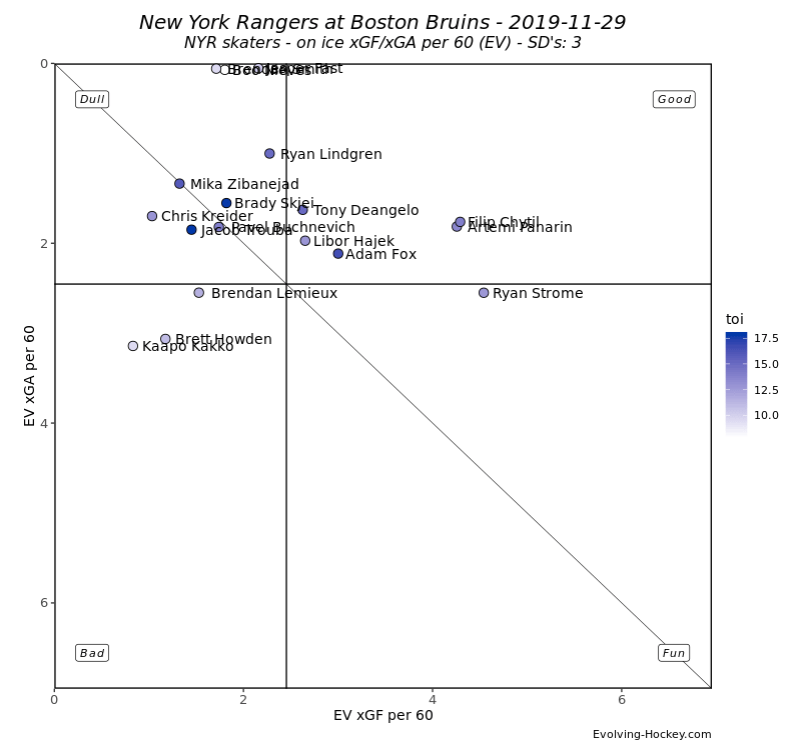 The third line continued to struggle, getting pinned repeatedly in their own end. This is one of those games where you can look at the tape and the stats and wonder what is going on with that third line. Changing up the center there might work, but I’ve been beating that Howden to wing drum for a while.

There isn’t much time for the Rangers to think about this one, as they have another matinee against the Devils tomorrow.