It’s been a busy few weeks for Ranger fans. Kreider-Chytil-Buchnevich have been rolling, Staal was declared out for a few weeks (maybe forever???), and the goaltenders are shouldering all the defensive woes per usual. That all said, not much has changed from the ten-thousand foot view of NYR when it comes to shots and chances for and against.

With the Rangers being 6-2-2 in their last ten and 3-1-1 in their last five, you may begin to hear the coaching staff or beat writers say that the team is finding their way. While this may be true for a remote handful of players, this hasn’t been true for the team as a whole – they’re still pretty bad. There is a bit of hope to be had for them to become competitive this year, however we’ll save that for the end.

The main plight of NYR thus far this year has been preventing shots and chances against (which is of no surprise to regular visitors of this site). Due to this, I looked at the NYR splits when it came to expected goals against at 5v5.

A few more tweaks on defense to limit the really bad games and NYR could maybe be not bad? pic.twitter.com/wMge25BtAy

Now of course, this is intuitive: if NYR plays better defense, odds are that they’ll look better when it comes to hanging with or beating a team in shots and scoring chances. The point still rings true though, as when NYR is near or below league average expected goals against (per 60 rating), typically the offense is generating chances regardless (shown as the xGF/60 averages). If NYR was able to shore up a few of these defensive holes, then in theory they could at least be competitive (52.4 xGF% would rank 5th in the NHL this season).

Who are the defensive liabilities at this point? Let’s look at the forwards, and I’m going to start with someone that may become a hot topic if his numbers continue they way they are: Kaapo Kakko. 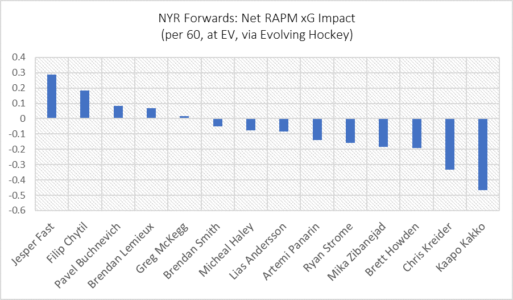 I’ll preface any comments about Kakko with the following: he’s 18 god damn years old playing in the best hockey league on the planet. All of us can tell that when he has the puck, he should have a long career of being able to make special plays happen (more on this in a second). However, if I’m going to disparage other younger players on the Rangers due to their negative analytic impact, then Kakko gets that same treatment. 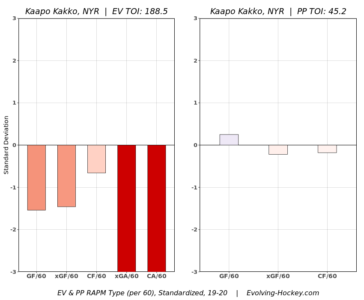 It’s been tossed around on NYR twitter that all of the Rangers defensive numbers are kind of a wash due to Lindy Ruff and whatever he thinks he’s trying to coach. I don’t disagree. With that said, it’s important that the Rangers find the correct center for Kakko ASAP, as spending an entire season in his own zone will get tiring pretty quickly. With 185 minutes at 5v5, Kakko has spent the majority of time with Howden (57%), Strome (32%), and Zibanejad (11%) at center. His time with Howden in the middle six just isn’t working from the view of sustainability, and Strome isn’t the answer here either. When Zibanejad comes back, Kakko should be on his wing.

On the individual contribution note (aka when he has the puck), I wanted to see how Kakko was ranking against other regular rookies thus far. The below is a bit of an eye chart, but I wanted a blended view of many items.

The above is all 2019-20 Forwards with at least 150 TOI as of 11/13. Red is good/hot, while blue is poor/cold. The good with Kakko? He’s scoring goals and literally possessing the puck well (Penalties Drawn and Giveaways). This checks out with his scouting report, as his great edge work and large body makes defenders work hard to get the puck off him. As for the giveaways, it’s simple: if you have the puck more, you’ll end up giving it away more (look up last season’s leaders – it’ll be littered with the best players in hockey).

The faded blue/white areas (individual shots/xG/scoring chances) are where his defensive impact are not allowing Kakko to truly shine. Again, given that the answer is not to keep him with Howden/Strome or move him down the lineup, I firmly believe some extended time with Zibanejad is a viable option. There is no data yet to prove why this may work, given that he’s barely played with 93, but with his recent performances there’s not a ton of reason to not try it, either.

With Zibanejad out lately, the Rangers depth at Center has been tested. As you can see in that RAPM impact chart above, Strome and Howden are both in the bottom five forwards in terms of net impact. Here’s how those impacts compare across both shots/chances for and against: 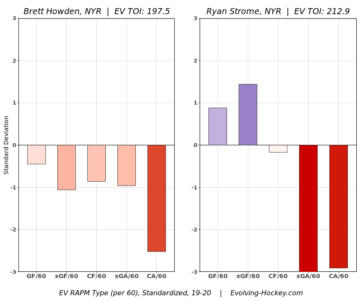 As you can see, the negative impact of both players inability to prevent shots and chances against when they’re on the ice for NYR easily negates any positive impact they have on offense. For me, both should be moved to the wing ASAP, and I’d go a step further with Howden as he should likely be in Hartford for an extended period of time. This would allow NYR to run Zibanejad, Chytil, Andersson, and Nieves (or someone else) down the middle upon 93’s return. I highly doubt that lineup of centers would do worse than the current crop (especially with Strome creating offense on the wing).

Enough about the forwards, onto the defense: 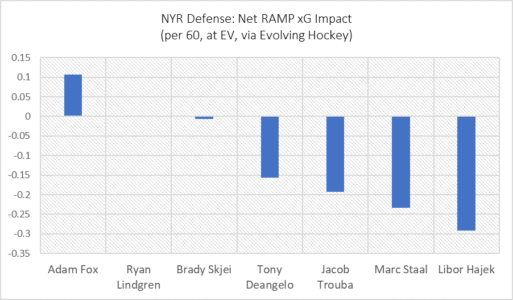 I’ll address the bad before the good: the Hajek-Trouba pairing simply isn’t working. Trouba has played over 71% of his 5v5 minutes with Hajek so far, and the results just aren’t there. Hajek is still young and raw – why Quinn and Ruff are shoehorning him into top-end NHL TOI is a bit of a mystery for me. He should likely be playing 3rd pair minutes, tops, or developing his game in Hartford. 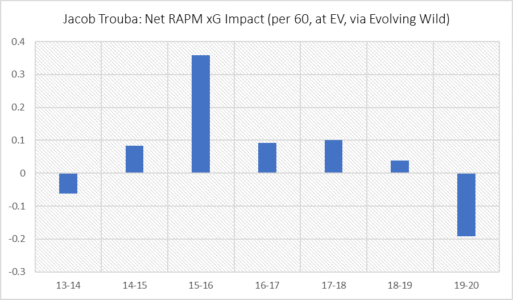 And while Hajek is clearly a weak point, my bigger issue is why how NYR coaching is seemingly fine with getting a negative impact out of Trouba overall. I understand that Skjei-DeAngelo and Lindgren-Fox have looked good lately, but Trouba was acquired to be the 1RD on a team that should be progressing towards contending. Akin to Kakko above with his center, finding the right partner for Trouba is paramount for the NYR defensive group to take the next step, and it needs to be a priority ASAP.

As for the rest of the defense, I’ll keep it short: Adam Fox is full-on legit, Lindgren is likely a product of him but it’s working so far, and Skjei-DeAngelo may actually think preventing shots/chances against is optional, but so far they’re breaking even (so we won’t complain that much).

Look, the Rangers are have been playing pretty bad, but as many have said through the start of this season – it doesn’t have to be this bad. The good news is that with the offense at least showing some signs of life (even without 93), they’re fun to watch and many do have promise to them. With 20% of the season complete and the league coming into scope as to who is for real, it’s time for the coaching staff to make some key tweaks to see if this roster can surprise anyone.