Note: The stats from this post were taken on Saturday. The Rangers have played a pair of games since then. While the exact numbers may be off, the overall trends are still accurate.

We have come to a point in the season where the possession and expected goals numbers are starting to normalize and become more telling of how a team is performing on the ice. These numbers are important because they speak to overall process on the ice. There are other factors to team success like overall shooting skill and goaltender performance, but process reigns supreme, and usually teams with better process go on point runs to even out the standings.

The narrative thus far has been that the Rangers are pretty talented offensively, but a black hole defensively. The numbers certainly check out too.

If NYR stops force-feeding Hajek high TOI and move some of the weak centers (Strome/Howden) to the wing, the xGA could improve. Oh, and fire Lind Ruff.https://t.co/Gv3cbwaW79

Without getting back on my soap box about the system and the overall team deployment, this shouldn’t be a surprise to anyone who watches the team. Sure they are flawed offensively, hence why they are 14th and not top-five, but they can be fun in the offensive zone. This is why their xGF% is so bad – their defensive numbers are so bad that they drag down whatever positives their offensive potential is.

What Rob shows here is the numbers at a point in time. That’s important, but it’s also not the whole story. Have the Rangers been improving from game to game? Are they getting worse? Or are they treading water? 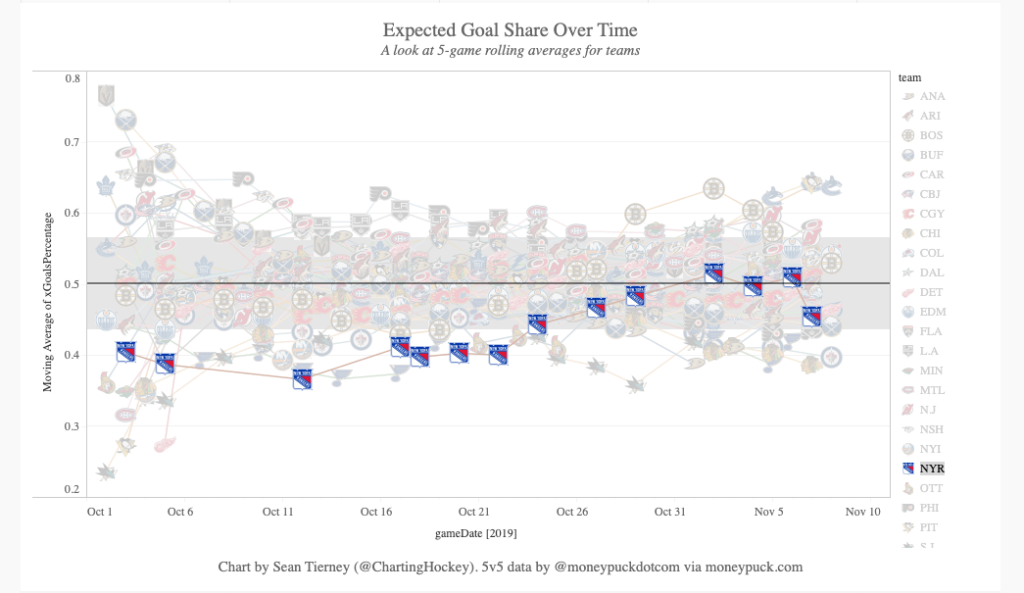 Starting with expected goals share, I’m pretty sure we can all agree that the Rangers were just awful to start the year. This represents a five-game rolling average, so it took a little while for the Rangers to crawl out of the cellar they were in. While they have been and will likely continue to be the worst team in the league in regards to shot share, their offense is picking them up to being average when you factor in quality.

There is a lot to unpack here – first and foremost is that those first three games this season were downright atrocious, but the Rangers went 2-1 because they faced Winnipeg and Ottawa, two not so great teams. The Rangers then lost their next four in a row –making it five in a row if you count the Edmonton loss– before that great team win against Buffalo. That’s the second uptick you see around October 26 on this chart.

The Rangers continue to trend up, with the Boston game showing up as the lone blip. That run against Tampa, Nashville, and Detroit were all upticks in their expected goal differential. The process was there. Of course they were inconsistent because there were big dips in their loss to Ottawa and the Henrik Lundqvist show in Carolina. For the most part, when the Rangers have their process functioning somewhat, they win. The problem is that it’s wildly inconsistent due to their inept defensive system.

Over the course of the season, the Blueshirts are likely going to remain below that median line of an even expected goals share. That’s almost entirely an end result of their poor defensive system, although lack of actual depth is a problem too. At least they should be fun offensively, as expected.