If there’s one thing we know about the Rangers, it’s that they are going to be fun to watch. The Blueshirts have the high-end talent to put up goals, but they don’t have the system in place to prevent chances against. Yesterday’s game is a prime example of what happens when your goalie can’t mask your defensive issues, as Henrik Lundqvist was given no help at all in the loss.

On the bright side, the kids showed they are alright. Ryan Lindgren got his first NHL goal and Kaapo Kakko scored. The young veterans Pavel Buchnevich and Ryan Strome added a few assists. Artemi Panarin showed why you give him $11 million a year. Offensively, a treat. Defensively, a nightmare.

This is an excellent passing play by Artemi Panarin and Ryan Strome, with Ryan Lindgren finishing. Lindgren crept in from the point to the back door and the Panthers couldn’t pick him up. This was a solid pass by Strome to hit him and then a great finish.

This is just a great play by Evgenii Dadonov to fight of Libor Hajek, and from his knees get the puck to Alex Barkov, who is smothered by Jesper Fast but still gets a perfect shot by Hank. This is a beautiful goal by the Panthers.

Dominic Toninato scores his first goal as a Panther and the @FlaPanthers take the lead! 🥳🥳

This is a learning experience for Adam Fox. Dominic Toninato is his man in front, but he doesn’t put a body on him or tie him up. The rebound after two saves by Hank goes right to Toninato and he buries it.

The @FlaPanthers execute during the power play with a quick goal by Evgenii Dadonov! 💥💥💥

Honestly this is just a beautiful powerplay setup. The Panthers have a high end top powerplay unit, and the passing was crisp. Dadonov found the seam in the coverage and it was bang-bang.

This Brady Skjei rush was what we had his rookie season. Nice to see he still has the wheels to pull it off. This went off a skate but it was created by the speed of Skjei. More of this by him, please.

You love to see it, Kaapo Kakko gets a goal in this scoring extravaganza 🚨 🚨 🚨 #PlayLikeANewYorker | #LGR | @NYRangers pic.twitter.com/amtD8ffMh4

Joe broke this down nicely on the broadcast. Kakko took the pass from Strome and skated into it, opening up the angle and getting a step on the defenseman. Kakko put it just inside the post.

How did Frank Vatrano get this open behind three Rangers? Also a bar-down backhand is just pretty.

Chris Kreider with the deflection off the Fox shot. He is easily the best net front presence on the team.

This was deflected by Brian Boyle in front. There was some chaos as the Panthers were able to change up the side of the ice, but Skjei simply didn’t tie up Boyle in front.

The Panthers got a lot more shot attempts than the Rangers did, but the Blueshirts did have the expected goals advantage in this one. It goes back to what we’ve been saying for a while. The Rangers are a train wreck from a possession standpoint, but at least hold their own from a quality standpoint. 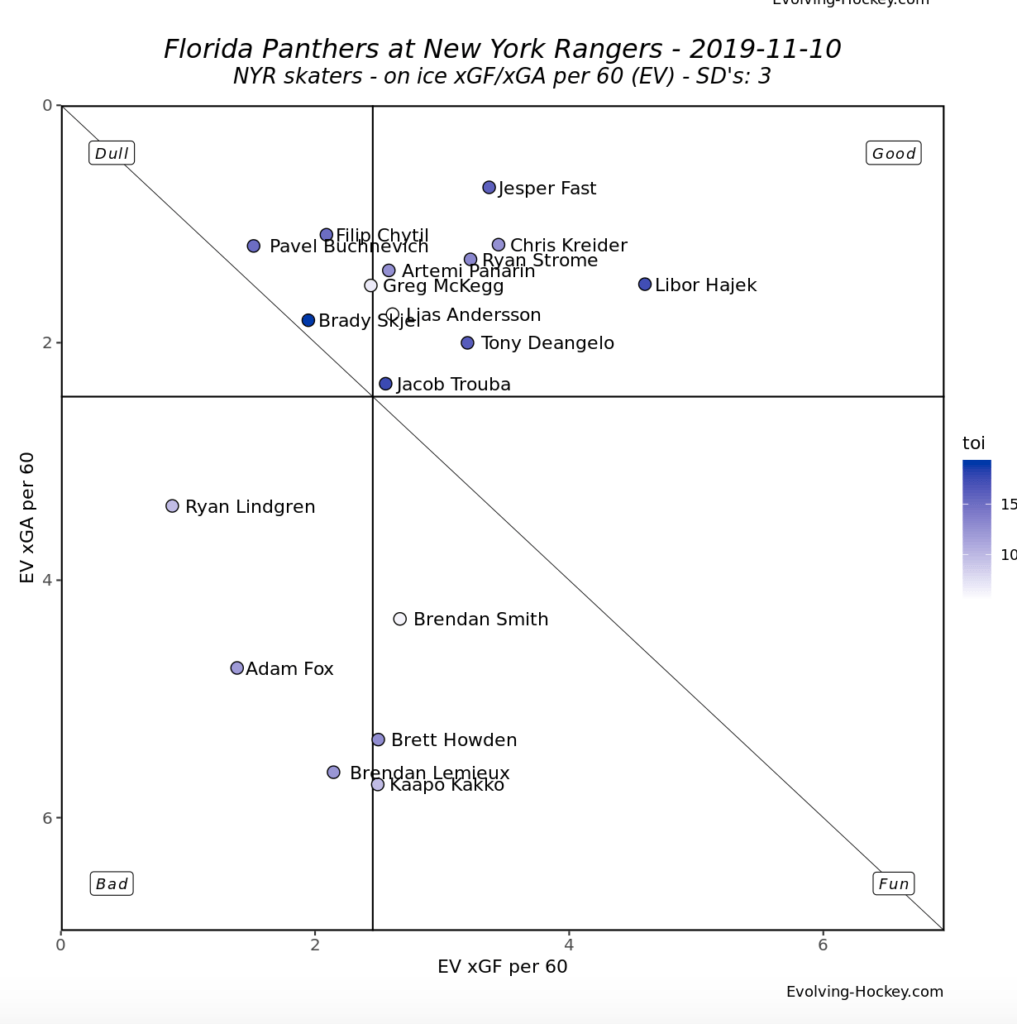 There’s a lot of good here from an expected goals standpoint. The Rangers are certainly a high-event team, and their games are going to be track meets for the most part. It’s good to see Hajek with a strong game.

The Rangers are going to be a fun offensive team to watch, but defensively boy are they a disaster. They likely won’t fix any of those issues this season. So let’s enjoy the offense and the track meets. Just try not to take anything too seriously.

As a note, I’m away until the end of next week. There’s going to be delays in any breaking news, but we will still have the content flowing. If there’s anything out of date, you’ll know why because it was written by me and queued up well in advance.