We all knew this was coming, right? After two strong wins against playoff bound teams, the NY Rangers laid an egg against the Ottawa Senators. The Blueshirts jumped out early, really dominating. Then they must have forgotten that hockey games are 60 minutes, not 8 minutes. It was all Ottawa after that, scoring five straight through the second period.

Alex Georgiev was human in this one, which certainly exposed a Rangers blue line that had two strong games in a sea of bad. This was just structurally terrible all around, with players chasing, puck watching, and generally playing slow and down to their opponent. Games like this happen, but might be a little more frequent than we’d like.

Strong shift from Kakko and nice pass from Fox leads to Kakko scoring his third goal of the season #NYR pic.twitter.com/WGkIQwMEdi

This goal is all about reading the play. Kaapo Kakko had a step on Chris Tierney as the puck went through the crease. This forced both Senators on the far side of the ice to turn their attention to Brett Howden and Adam Fox. Fox is a super passer, and Kakko has smooth hands.

#Sens on the board in NYC.

This looked like a miscommunication between Georgiev and Libor Hajek. Both got caught in between actions and it wound up in the back of the net.

It’s a 5-on-3 goal, so you usually look past these. Worth noting that Tyler Ennis was wide open on the wing for the blocked shot rebound.

Lovely feed from Brady for Hainsey's first goal with the #Sens.

Four Rangers on the kill watching the puck as Ron Hainsey sneaks to the back door for the goal. Head on a swivel, folks.

Heck of a solo effort from #44 for his second of the night.

I don’t know what Pavel Buchnevich was thinking, taking a slapper there with JG Pageau right in front of him. He only scores against the Rangers, too.

Vintage Brady from the top of the crease.

Three guys behind the goal line. One (Brendan Lemieux) in the corner. I think this is self explanatory.

If there’s one thing we know, it’s that the Rangers move the puck well on the power play. Kakko made a perfect pass to Artemi Panarin, who found an easy shot short side as Anders Nilsson was off his angle coming over.

Vladdy strikes on the power play against his former team.

The Rangers nearly scored short handed here, but when they missed and Brady Skjei’s shot wound up in shin pads, it was a scramble. Skjei made a great defensive play, but the rest of the penalty killers couldn’t get back in time as Vlad Namestnikov buried one.

This is basically what you expected it to be at even strength. A lot of density in front as the Rangers struggled with their defensive zone coverage, and not much offensively as the Blueshirts were pinned in their own zone. 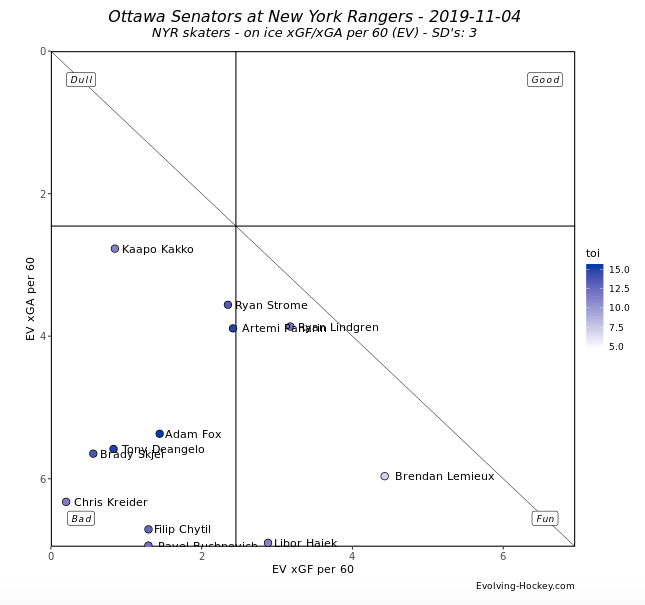 Again as expected. This was not a good game for any Ranger.