Please note: all data used in this article does not precede 10/16/19, due to the ongoing shot location issue with the first 91 games of the NHL season.

On Tuesday, about two hours before the Tampa Bay game, I messaged the BSB group to say that I planned to write an NYR numbers update on Wednesday and that it would “be of a positive nature.” The thought formed originally in an effort to break away from the historically bad start we’re witnessing NYR put together, but after the Rangers most complete game of the year against the Lightning, being positive is a little easier today.

Leading up to the Tampa Bay game, the Rangers were in complete disarray on the ice. The Rangers have struggled with limiting shots and chances against, especially since Lindy Ruff showed up. Dave has mentioned time and time again that some of this (outside of player talent) is by design. Despite this, the Rangers have managed to generate decent expected goals for figures in the past few seasons with an ever-changing forward corps, and this is still ringing true the morning of 10/30/19:

As @RangerSmurf said, fix the defense and the offense will follow suit. Last night was progress, but more can still happen.

I shamelessly share my own tweet because while NYR has seemingly chosen to go with a less talented roster to start the season, there is a path forward for NYR to potentially show improvement over last year with the personnel options they currently have. Any improvement in limiting shots and scoring chances against will allow these young and talented forwards to challenge the actually good NHL teams of 2019-20. I think we’re all comfortable in saying that the Rangers goaltending situation is a good problem in of itself, so who knows how effective this team could be with an improved defensive structure and lineup deployment.

Speaking of goaltending, let’s move to the first positive: Lundqvist and Georgiev

The simple breakdown of the above chart (all situations) is this: the quality of shots and chances that Henrik Lundqvist has faced should result in numbers that would risk his NHL roster spot. When you adjust for these factors, Henrik actually comes out looking like a top 10-15 goaltender. Georgiev has faced some easier competition thus far, but still has put up respectable NHL results, which is good because that’s exactly what NYR will need if they plan to obtain an asset for him. In the end, Benoit Allaire and the organization as a whole continues to offer the Rangers well above average goaltending options despite the rebuild status.

Moving onto the skaters, which requires me to start with the defenseman who has looked sharp relative to his time on ice, Adam Fox. 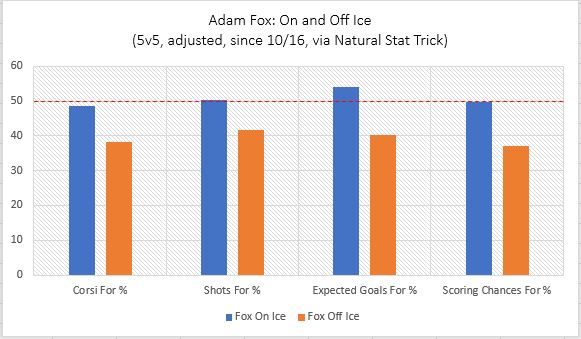 When Adam Fox has come over the boards, the Rangers have usually benefitted in the form of being able to hang with opponents when it comes to shots and chances. Some of this positive work was while he was paired with Brady Skjei, as Fox’s numbers took a dip (as expected) when he got paired up with Marc Staal. Still, on a team that needs to prioritize good-skating and puck-moving defensemen, Fox is certainly playing in a way that should yield more time on ice. He’s also been getting some more power play time, deservedly so.

I do have to give an honorable mention to the Skjei-DeAngelo pairing on defense, who have been a relatively positive force since being paired up in Game 6 against Vancouver. More on the defense later.

As for the forwards, two of them have played consistently above the rest: Jesper Fast and Artemi Panarin. 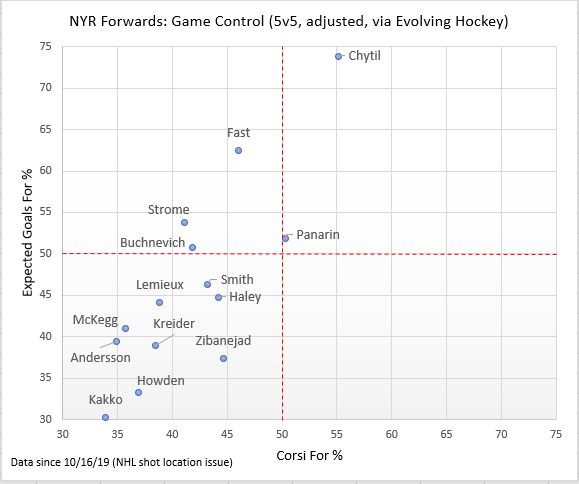 Panarin has already showed why he was the top UFA of the summer as he’s played well regardless of who is on his line thus far. Ironically for the other forwards that have played with him, it’s the shots against that decrease more than the shots for increase when on the ice, as he’s a well rounded player who wins puck battles. The same can be said for Fast, who quite clearly makes it tough on the other team to generate much when he’s on the ice. While Fast has seen his TOI rise, his perfect usage will be in that middle six to complement a line if and when Kakko and Chytil get settled in (I included Chtyil on the chart to show just how good he was against TBL).

To finish this up, I’d like to look at the defenders as a whole, but with a positive spin (courtesy of the Lightning game). 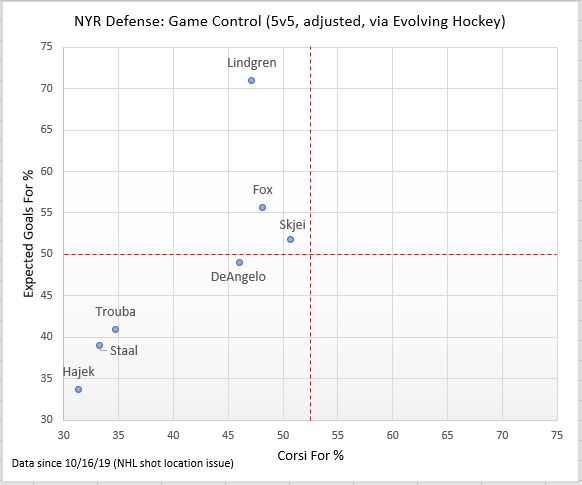 To put it bluntly, the Rangers defense looked alive and well against Tampa Bay without Marc Staal, who was deservedly scratched after 2-3 years of declining and below average play. While it is unlikely that Staal sits the remainder of the year, the other concerning trend emerging for the NYR D is the Hajek-Trouba pairing, who have been playing top-pair TOI at 5v5. WOWY (with or without you) analysis has its limitations, but Trouba has been about 5-8% better in terms of shots and chances (at 5v5) in the limited time he’s been away from Hajek. In the end, Hajek is looking like he’s simply not ready for this amount of TOI in the NHL and may benefit from some time in Hartford. If this were to be the case, that would leave the following as the ideal NYR Defensive pair options:

Say what you want about the value of Smith’s contract, but part of the reason he’s been able to transition to Forward and put up respectable shot and chance share numbers is because he can still skate and defend at an NHL level. By sending Hajek down, a forward could come up from Hartford while Staal, Smith, and Lindgren rotate out as the 7th D-man. Finding Trouba a competent partner that will allow him to create offense, which has been his strength for years, should be a huge priority for Quinn and Ruff.