It was the prospect show last night for the Rangers, as Filip Chytil, Adam Fox, and Kaapo Kakko all scored for the Blueshirts in their 4-1 win over the Lightning. The Rangers took advantage of a shorthanded Bolts team without their best defenseman, and chipped away until finally breaking through for three in the third period.

The kids were the story, but so was the goaltending. Alex Georgiev and Andrei Vasilevskiy were sharp and both put on clinics for this game, combining for 67 saves on 71 shots, many of them difficult. This was a fun win.

This is all about a bad change and Brayden Point reading it properly. Nikita Kucherov with the finish.

Kaapo Kakko got some luck here, but look how he waited until Ryan McDonagh was out of the way before he shot. That’s good instinct right there.

Filip Chytil gives the Rangers a 2-1 lead in his first game back at the NHL level, Buchnevich assists #NYR pic.twitter.com/z2aoM9e1gd

The kids come through. Ryan Lindgren with the good defensive play to start the rush. Pavel Buchnevich with the great pass, and Filip Chytil with the deflection over Vasilevskiy.

What a Foxy goal for Adam. Ryan Lindgren with his first NHL point. The kids. They have arrived.

The puck possession game was pretty even, but the Rangers crushed the Lightning in expected goals. They got far better quality chances. Might have to do with the Bolts missing two players from puck drop, but take it. 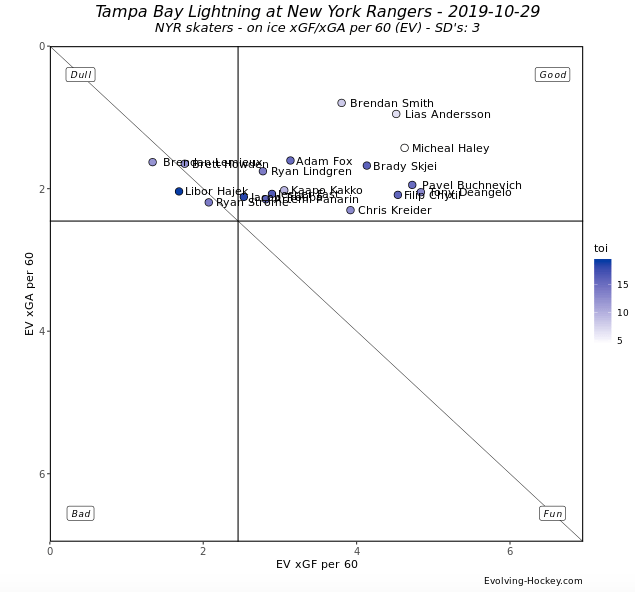 The Rangers really dominated the expected goals part of the game, and it finally wound up breaking through in the third. Worth noting that Tampa looked very slow.

The rebuild has been painful, especially this month, but with two strong wins sandwiching a poor effort against Boston, there are signs of life from this team. Let’s see if the team has the guts to stick with their lineup decisions that clearly helped this in this game.