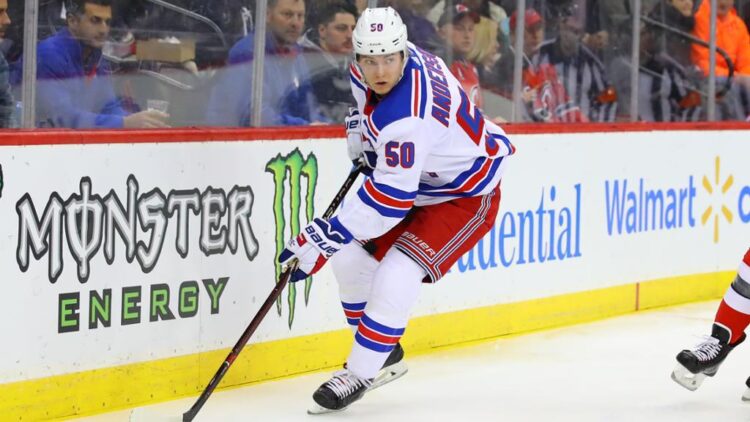 In eight short days, the Rangers 2019-2020 season begins. Preseason so far has provided a mixed bag: a 1-3 record highlighted by some flashes of offensive brilliance, balanced by suspect defending. The players who have impressed are mostly locks to make the opening night roster. Artemi Panarin, Pavel Buchnevich, Kaapo Kakko, and Jacob Trouba have been as advertised.

But some interesting storylines have developed which will make David Quinn’s final decisions controversial, no matter how they shake out.  Filip Chytil, Brett Howden and Lias Andersson are vying for the 2nd and 3rd line center spots. Brendan Smith’s spot on the team does not seem fully secured. Igor Shesterkin is certainly making a case for an NHL job.

As of this writing, the Rangers training camp roster had been trimmed to 36 players, and by the time you read this it will likely be reduced further. Expect names like Steven Fogarty, Vinni Lettieri, Matthew Robertson and Tarmo Reunanen to be among the next round of cuts.

Igor Shesterkin and Adam Huska have both had their moments.  Shesterkin in particular was brilliant against Philadelphia, in a game in that featured a Rangers B-team that got overrun by a strong Flyers’ lineup. Still, it seems as if the role of Lundqvist’s understudy is (rightly) Georgiev’s to lose, and he’s done nothing so far to put his status in jeopardy.

No changes from last week’s prediction, but that’s not for any performance-based reason. The Rangers defense just is what it is. They will lean heavily on Jacob Trouba, and Brady Skjei is going to get every opportunity to show he can handle first pair duties. Tony DeAngelo has some major catching up to do. It’s very possible he makes the Opening Night roster but watches game 1 from the press box if Libor Hajek has a good showing in his next preseason game.

Brett Howden’s audition for the 2C spot on Tuesday night did not go well. He was given a chance to shine in an offensive role between Kakko and Kravtsov, but that line spent most of the night in its own end. Lias Andersson was relegated to a 4th line role and played only 7 minutes at even strength. While preseason performance doesn’t tell the whole story, usage can be an indicator. It’s not a stretch to imagine one of Howden or Andersson starting this season in Hartford, and I’m going to project that it’s Andersson.  Filip Chytil will likely have a chance to secure the 2C job with a good performance in his next preseason game. Meanwhile, Vlad Namestnikov is on the roster despite the lack of a clear role for him.  I would not be shocked if the Rangers trade Namestnikov early this season, as they did with Ryan Spooner last year. Greg McKegg has proven to be a capable depth forward who can check, play center and chip in offensively. One of McKegg or Boo Nieves will likely start the season as the fourth line center.

Leave your opening night roster and lineup predictions in the comments!