When the Rangers acquired Jacob Trouba on June 17th, two things were very evident. First, the Rangers managed to get high value out of Neal Pionk and a first-round pick. Second, Trouba immediately became the best defenseman on the NYR roster, without question. And while the latter point was further solidified with the buyout of Kevin Shattenkirk, one of my main wonders of the summer is how Trouba will perform with likely to-be partner, Brady Skjei. Skjei is clearly the best LHD on the NYR roster and has always been lauded for his skating ability, so the pairing seems natural, even if the chance for fireworks (read: high shots and chances both for and against) exists.

With that said, I wanted to look back at Trouba’s past partners to see if there was anything we can learn from it. Essentially, have there been any trends that has led to better or worse results for Trouba? Naturally the Jets of the past three to five years have been different from the Rangers, but given the limited options behind Skjei on LHD for NYR, it might be best to know who should be next up.

To start, let’s look at the 10,000 foot level and just see which years have been Trouba’s best. 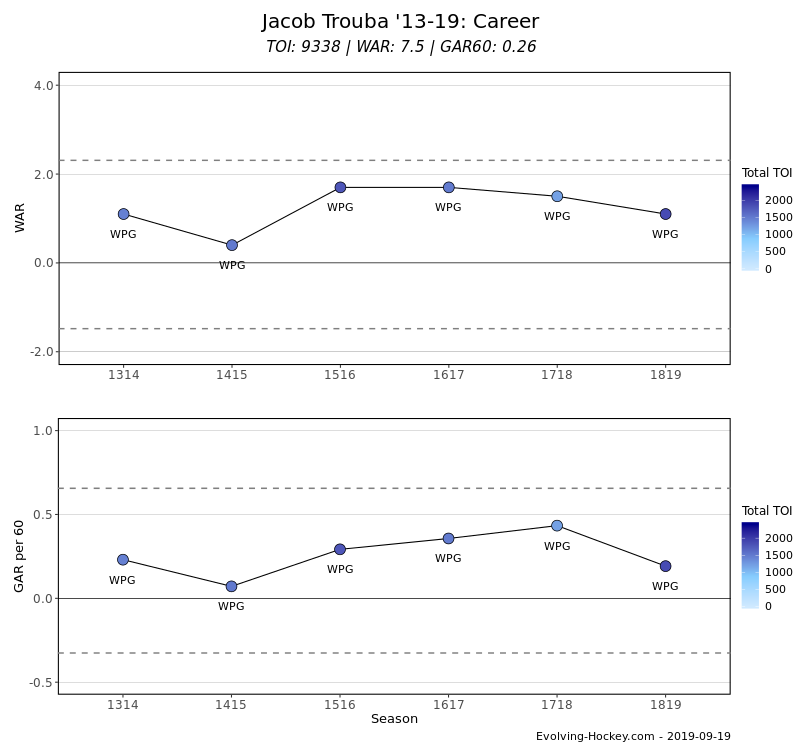 Trouba has been consistently above average to good when it comes to his overall game (measured by Wins above Replacment/Goals above Replacement). That said, he’s yet to get to the real elite levels of the NHL (the dashed line above the 2.0 WAR) of being a standard deviation above the rest. This can be visualized another way by turning his WAR figures into percentiles. 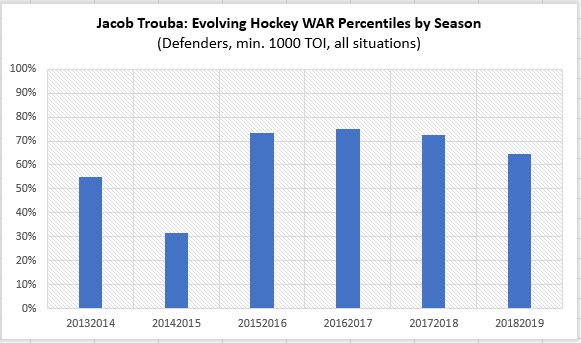 Typically about 150-155 NHL defensemen per season play over 1,000 all-situations minutes. As I alluded to, Trouba has been consistently above average when it comes to being a high-TOI NHL-level defenseman, but he’s still not in that 80-90% plus range of being great or elite. The reason I bring this up is because it raises the importance of Trouba being paired with someone who can complement and support him, thus maximizing his play for NYR.

Trouba has played 88 percent of his NHL minutes at even strength with six defensive partners (ranked in order by shared TOI):

Eyeballing his WAR charts, it certainly seems Trouba’s best all-around years (despite his 50 points last year) was the stretch between the fall of 2015 and the spring of 2018. Of course this tracks from the sense of Trouba moving towards his peak playing age (~25), but it is interesting because it was a transition period between Stuart and Morrissey, where he also spent sporadic time with Byfuglien and Enstrom (better-known names than Stuart and Morrissey). So what did the shots and expected goals look like, by partner? 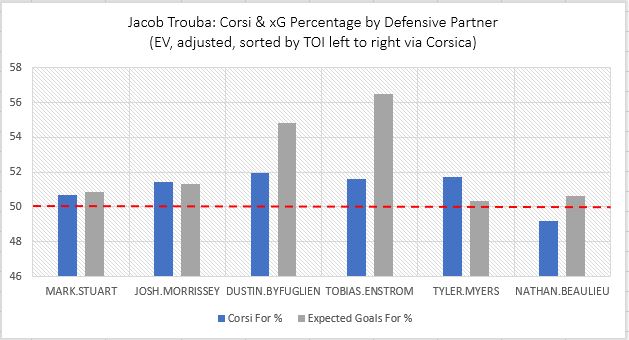 It makes sense that when Trouba was trotted out with Byfuglien and Enstrom, two higher-end defenders in their own right, the pairs xG and Corsi shot up higher than his career averages. To me this starts to show that while Trouba is a fine defensemen on his own, when he’s paired with equal or better talent he can potentially find another level of play. So how do those percentage results break down into shots and chances for and against? 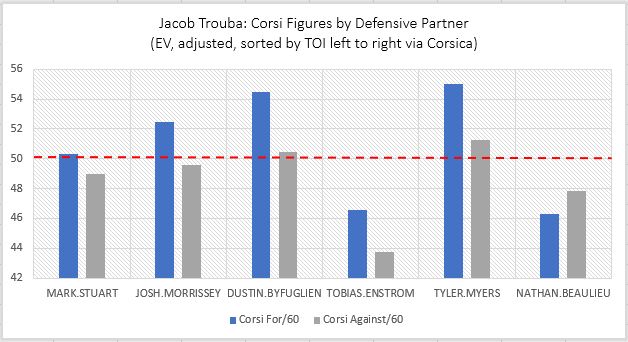 It’s worth pointing out right off the bat that Stuart was a lower-event partner compared to Morrissey. Not by much, but it could make a difference over time. The contrast between Byfuglien (known for his offense) and Enstrom (known for his defense/efficiency) is stark. It likely indicates Trouba can adapt to higher or lower event partners, which is good. Onto the expected goals: 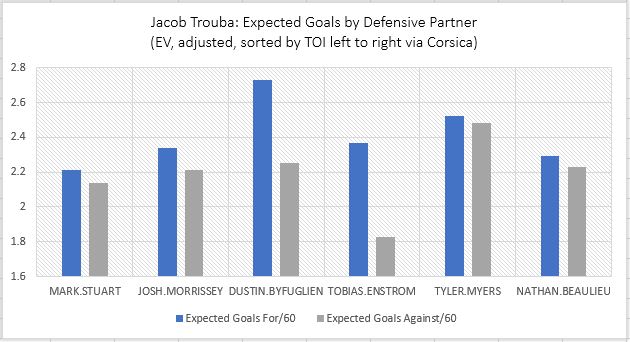 Once again, Stuart and Morrissey are average partners where Trouba is likely driving the bus for the most part. Byfuglien helped create a dynamic offensive pair while Enstrom could help lock down a lead. Myers, meanwhile, tended to trade chances given his history of weak defense while Beaulieu seemed like a passenger akin to Stuart and Morrissey.

In the end, the Rangers do not have talents like Byfuglien or Enstrom to pair Trouba with, so this leaves us with Stuart and Morrissey to analyze. Stuart was historically a lower-event/quieter defenseman, while Morrissey helped create more offense with Trouba (which, makes sense, given that Stuart was in decline and Morrissey was on the rise). Skjei, generally speaking, has a been a higher-event NHL player in terms of shots and chances, both for and against. While this could be good for Trouba’s point totals (especially playing with NYR’s revamped top six), it might not be the absolute best for the team, even if it is the best choice as of this moment. 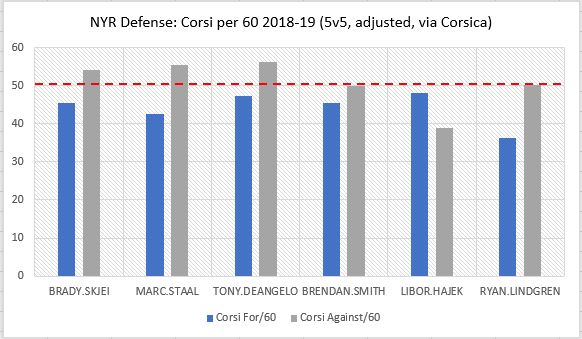 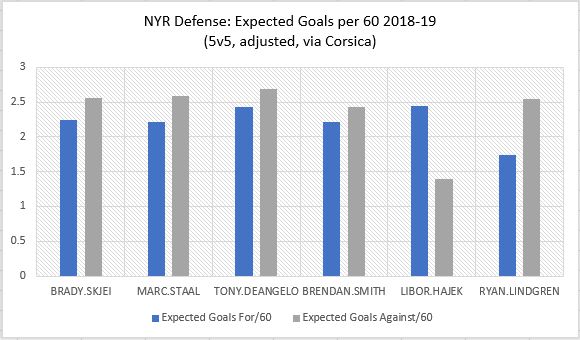 As you can see, no one from the NYR Defense really stands out as an overly-interesting option from Trouba. DeAngelo of course has the offensive pedigree thus far, so that could potentially create a lesser version of what was seen out of Byfuglien-Trouba (off-hand be damned!). This will make some people shudder, but I do think Brendan Smith could be an option in the vein of the results Trouba saw with Enstrom. Smith’s zone entry defense has not faltered despite his decline with NYR, so he would actually complement Trouba well in this sense. Libor Hajek could also follow this logic, however with a small sample of games last year before his injury, we don’t fully know what NYR has in him, yet. Finally, not to exclude anyone, I do not think Marc Staal should be an option whatsoever (press box, ideally), while there are also serious doubts that Ryan Lindgren is even a decent AHL’er.

When it’s all said and done, Trouba’s results in the NHL have come by the way of being paired with left-handed defensemen who I would describe as “stable.” Mark Stuart and Josh Morrissey are certainly fine NHL-level defensemen, but they were/are not great or elite players by any means. With the long-term signing of Trouba by NYR, the next major step will be finding a complementing partner for him that can maximize his value (and replace the hole left by Ryan McDonagh). While I hope the results with Skjei go well, I also think that given this year will likely be a non-playoff season, experimenting playing Trouba with players such as DeAngelo, Fox, Smith, and Hajek (assuming he’s in the NHL) should occur. We may not learn more about Trouba in those cases, but NYR can certainly learn more about the youth, which should be a serious part of any non-playoff year.