When the Rangers landed the biggest free agent fish on the market, they got themselves a bonafide 1LW, an elite winger capable of 30 goals and a point per game. He’s a talent the Rangers haven’t had in at least a decade, and someone that you hope Kaapo Kakko and/or Vitali Kravtsov turn into at their peak.

Panarin dominated the KHL before coming over to the Chicago Blackhawks for the 2015-2016 season, and then immediately put up a point per game or close to it. For some reason, the Hawks traded him to Columbus for Brandon Saad, which was a silly trade. In his two years with Columbus, Panarin put up 82 and 87 points. Of last year’s 28-59-87 line, 6-12-18 of that came on the powerplay. That stat line would make him the highest scoring Ranger overall and the second highest scoring Ranger on the powerplay, based on last year’s stats. I think you all knew that though. 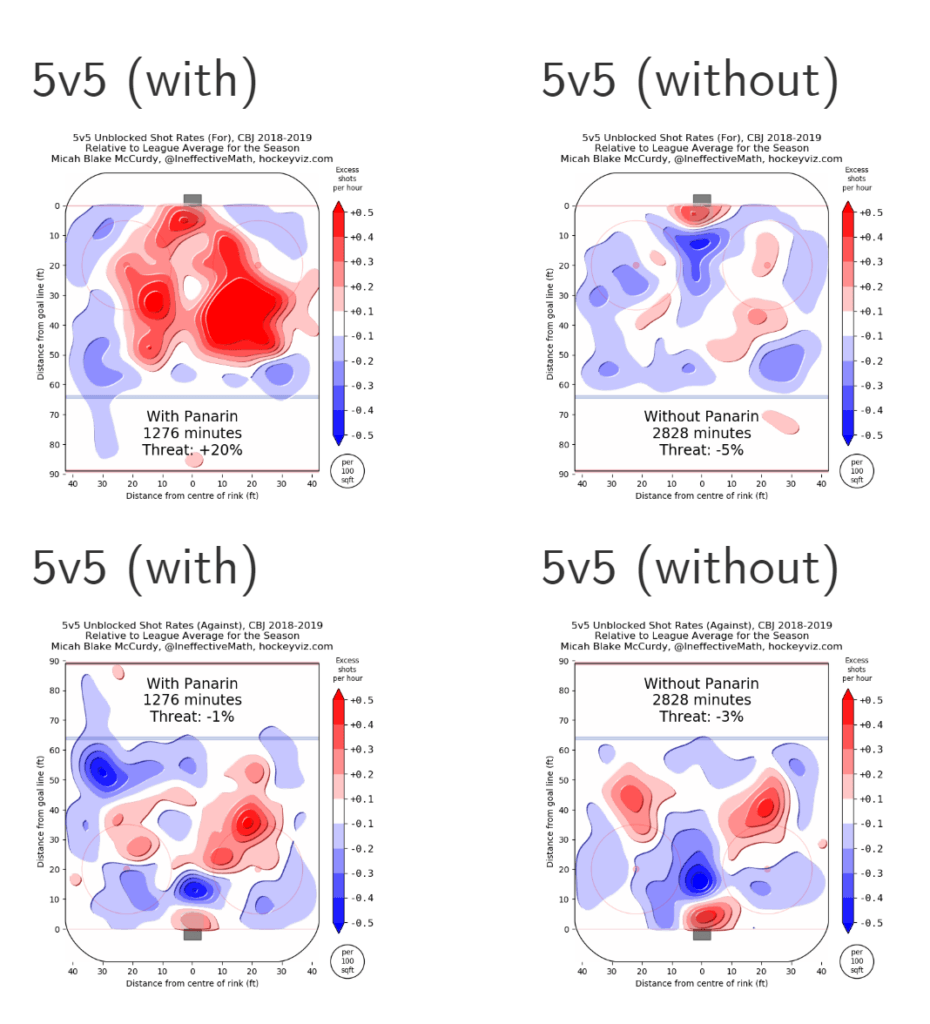 Let’s first look at his overall impact on shot locations while he is on the ice, both for and against. His offensive impact is the top two charts, and the defensive impact the bottom two. Just look at the difference in with and without on offense. That sea of red in the middle of the ice, plus the +20% increased threat level when he is on the ice, makes him a legitimate scoring threat for him and his teammates whenever he is out there. He just drives the offense. There’s very little red when he wasn’t on the ice for Columbus.

Defensively, the effect is significantly smaller. Focusing on where the LW would be playing (left point), the impact is clear. More blue when on the ice, and more red when off the ice. However it is worth noting that Panarin may struggle around the top of the circle with his defense. If that’s the only downside, then I’ll take it. Panarin’s impact isn’t just on the score sheet, it’s in sustained offensive zone time, so ideally he’s rarely in the defensive zone. 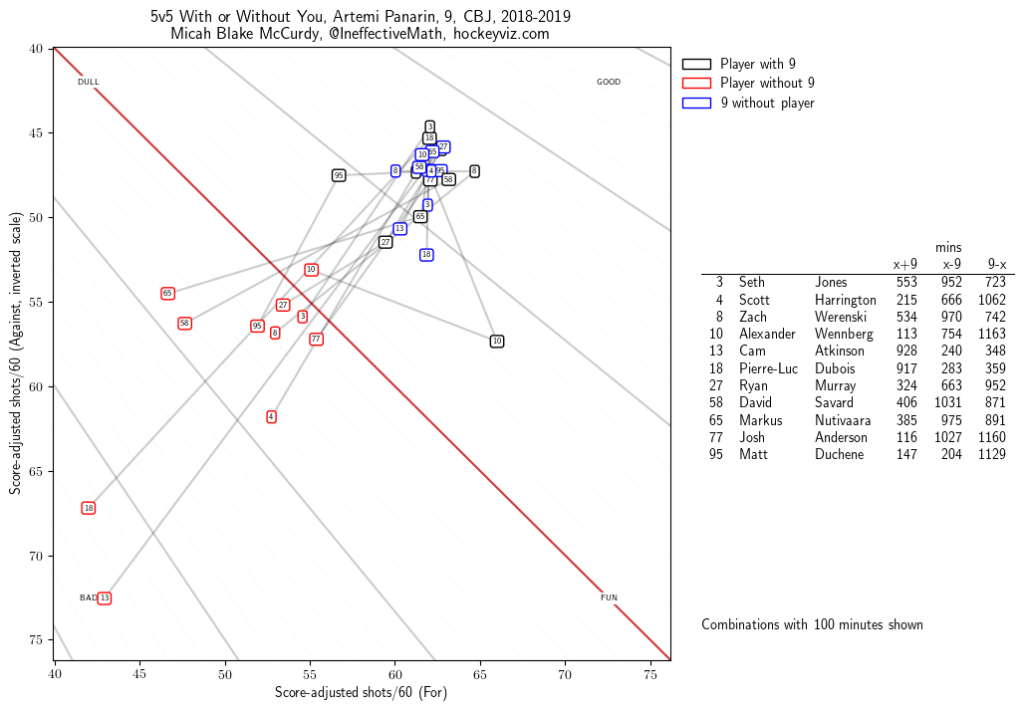 This shows us Panarin’s impact on the rest of his Columbus teammates. I don’t think I needed to tell you this, but Panarin was the driver for Columbus. Almost every single player was worse (red boxes) without Panarin on the ice. When looking for impact players, you want to see all red boxes to the lower left of the cluster here, and that’s what Panarin shows here. He’s no coaster. He’s the driver.

Here are all his goals from last season. Notice how he never stops moving, finding the open ice, and then surveying what options are available? He does this so quickly, and his decision making is impeccable. That second goal off the rush, he saw how the defense was gravitating towards the puck and he just slammed on the brakes in the slot and waited for the pass. His vision is tremendous. Also, his shot is possibly the least talked about aspect of his game, but it’s lethal.

With Panarin on the ice, it may actually be ideal for David Quinn to split him up from Mika Zibanejad, and perhaps put Panarin with Filip Chytil as his center. Panarin will draw the attention, which means Chytil has less pressure on him. Throw in some Pavel Buchnevich so the under-20 year olds are split up, and you have a solid 1A to the Kreider-ZIbanejad-Kakko/Kravtsov 1B. That’s just one of many possibilities with the front-end talent the Rangers have.

The Blueshirts didn’t have the best powerplay last season, but they did find their own Alex Ovechkin-lite with Zibanejad at the off-wing firing away. Panarin also plays that spot, but is not the shooter that Zibanejad is. 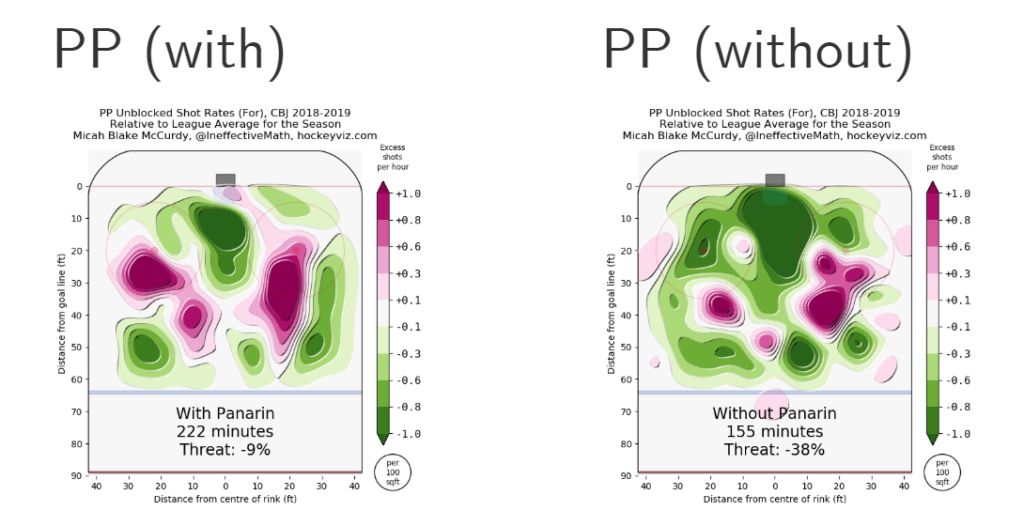 Now Columbus didn’t have the best powerplay, but look at the impact when Panarin was on the ice versus off the ice. It’s almost a 30% increase in actual effectiveness. Interestingly enough, most of the shot attempts with him on the ice came from the top of the right circle, not the left circle. So he’s feeding the other off-wing with opportunities.

The first thing that really grabs my attention on the powerplay is how penalty killers gravitate towards Panarin.

This highlight is with Seth Jones on the point and 40-goal scorer Cam Atkinson on the wing, yet Panarin is the one drawing the attention and giving room for Jones/Atkinson to play catch for the blast from the point.

Another thing that jumps out at me is how poised he is with the puck and how quick his decision making is. On this play, he has the penalty killer all over him, but he holds on to it until the very last second to allow the rest of the powerplay to get set up. This gives the point and the off-wing more time to shoot, and it winds up with Atkinson’s goal.

For what it’s worth, Panarin didn’t play the PK with Columbus. If the name of the game is riding your best players every chance you get, I can see that changing.

Artemi Panarin is the elite, play driving, scoring winger that gives the Rangers a much needed attention driver on the ice. Teams will load up against him, and look to stop him, yet he just smiles and sets up his teammates for scoring chances. His presence also slides down some previous first line talent to the second line against weaker opposition, giving them more opportunities to feast on lesser talent. Chris Kreider should see the immediate impact here, if he’s still with the team come October.

The Rangers are taking a gamble on a seven year deal, especially on a contract that is essentially buyout proof with a no-move clause. But this is a calculated gamble with an extremely low risk of blowing up in their face. The Rangers got one of the best wingers in the game.