Looking at how much it would cost to re-sign Chris Kreider, and why the Rangers should do just that 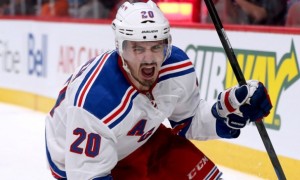 The Rangers are at a crossroads with Chris Kreider, the longest tenured forward on the team. Kreider is in the final year of his four year deal with a $4.625 million cap hit and is due a fairly big raise come this time next year. The 28 year old winger, 29 when his contract expires, is a part of the leadership core currently and is the longest tenured Rangers forward. He’s also the last remaining forward from the Black and Blueshirts of 2011-2012, and if re-signed, would be the last one on the team in a few years.

Per Larry Brooks, the Rangers have not had significant discussions with Kreider’s agent yet. This leads Brooks to believe the Rangers and Kreider will part ways this offseason. If he is not a part of the future, then trading him this offseason –either at the draft, or after the free agency frenzy dies down to a team that missed out on the top available UFAs– is the only option available to them. A third straight trade deadline where the Rangers sell off spare parts is not ideal, and neither is a lame duck Kreider.

The concern across these interwebs lately is how much it would cost to re-sign Kreider. Folks are pointing to Kevin Hayes’ recent deal with the Flyers (7 years, $7.14 million, 8.7% of the $82 million cap ceiling) as the comparable to Kreider, and that’s not exactly a good comparison. For starters, Hayes is two years younger than Kreider at the timing of this deal, and Hayes is a center. We need to find better comparables.

Max Pacioretty also carries a $7 million cap hit with Vegas on a four year deal, but he’s another that was coming off 30+ goals and 60+ points for three straight years before his down year in 2017-2018.

James Neal inked a five year deal with a $5.75 million cap hit with Calgary prior to last season, which was 7.23% of the cap ceiling. Neal’s numbers are slightly more comparable to Kreider’s, with under 30 goals and under 60 points, but he was coming off back-to-back 40 point seasons when he signed that deal.

Then again, Jordan Eberle’s new deal with the Islanders, which is 5 years at $5.5 million and 6.92% of the cap ceiling, is an interesting one. Eberle was coming off a down year of 19-18-17, but had averaged 50+points and 25ish goals for the prior five seasons. He signed the deal right after he turned 29 as well.

With two deals at $7 million on the higher end of the comparable deals and two deals under $6 million at the lower end, we see the middle ground. It’s clear Kreider is likely to get five years, taking him through his age-33 season. I say let’s call it in the middle and at a $6.5 million cap hit. Certainly doable, right? Especially since that’s about a $2 million raise on his current salary, after all.

For most, it appears the issue is the salary, and not necessarily the player. We covered this in his report card, Kreider is an absolute beast on the ice. His rare combination of speed and strength is unmatched at the NHL level, and he’s also the best net-front presence for the Rangers. We’ve seen time and time again how his play in front has directly led to goals either through deflections or screens.

In today’s NHL, the 25-25-50 player gets about 8% of the cap ceiling, which puts Kreider at about $6.75 million of a projected $84.5 million cap ceiling in 2020-2021 (3% increase on $82 million estimate). That’s fair market value for a player whose skill set ages relatively well. The Blueshirts also get $25.2 million in cap space freed up (Shattenkirk, Staal, Smith, Lundqvist) in Kreider’s second year of his new deal. So there’s money to spare. For a team looking to accelerate the rebuild, trading their second best scorer isn’t the way to do it. Looking at the leadership aspect, he speaks fluent Russian, something that should not be forgotten with the likes of Buchnevich, Kravtsov, and Shestyorkin on the roster.

The Rangers and Kreider can make this work, and it would be mutually beneficial for both sides. It would be silly for them not to talk and hammer this out.