When we think about Jacob Trouba, there seems to be two schools of thought. The first is that he’s a true 1RD, the 1RD the Rangers have been searching for throughout the years. The second is that he’s more of a 2RD who will struggle in his own end. The truth is that it’s a bit of both, and Trouba is more in the middle of these schools of thought.

In Winnipeg, Trouba enjoyed a breakout campaign this past season. He played a full 82 games and put up 8-42-50. For the first time in his career, he was utilized on the top pair and on PP1, and rewarded management with excellent offensive play. That’s where Trouba’s value is. His xGF% of 48.87 with Winnipeg isn’t sexy (still managed to be 3rd on the team). His splits were a 2.32 xGF/60 (2nd) and 2.43 xGA/60 (4th). So again, we see a guy whose true value will be in the transition game and generating sustained offense. That said, he’s not exactly a liability in his own zone, as a 2.43 xGA/60 would be 4th on the Rangers too, ahead of Tony DeAngelo and Brady Skjei. So when we say that his true value is offensively, it’s because he’s just very good in that aspect of the game. To say he’s bad defensively would be a mischaracterization of his game.

CJ Turturo has created some great visuals based off game tracking done by Corey Sznajder, and gives us some insight into where Trouba’s strengths and weaknesses are.

For the sake of the post, we compared him to Tony DeAngelo, but that really doesn’t matter much. It’s mostly to show how the Rangers are improving in their transition game.

The key item for me is the zone exits, and how successful Trouba is here. He’s one of the best defensemen in the league at transitioning to offense. This shows he has good puck control skills and outlet passing ability. Worth noting that while DeAngelo is the best in the game today at this, Trouba is no slouch. Transitioning from defense to offense is an area in which the Rangers have struggled mightily. With DeAngelo and now Trouba, it might become a strength very quickly.

Where Trouba struggles is in preventing zone entries. He’s middle of the road in breaking up rushes against, but when he can’t break up the entry the opposition gets a controlled entry (carry in or pass) the majority of the time. From limited viewings on my end, it leads me to believe that Trouba goes for the turnover at the blue line. When it works, it’s great. When it doesn’t, the opposition has control. It’s worth noting that this does not show us how Trouba is in his defensive zone coverage. 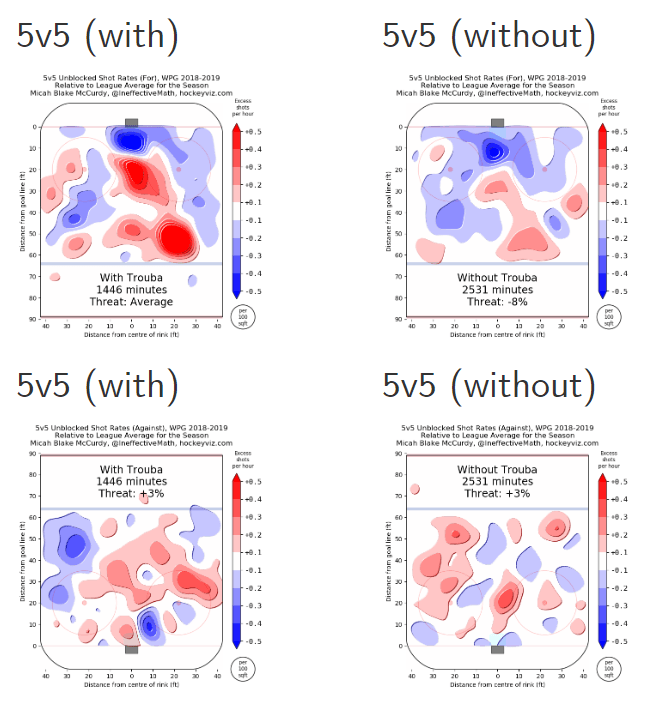 The bottom half here can give us some insight into how Trouba plays in the defensive zone. The first thing that jumps at me is the threat level remains mostly the same, so he doesn’t necessarily move the needle defensively. The second is that blue area with him on the ice at the right side of the net, which leads me to believe he covers the net mouth area. The third is the area at the top of the circle and high slot is a deep red, so while he’s covering the net mouth, the opposition is finding other areas to shoot from. All this leads me to believe Trouba is average in his DZ coverage. He’s not a show stopper, but he’s not a huge liability either.

I found a good highlight video, and there are some things I noticed right off the bat:

In Trouba, the Rangers are getting a true top pairing RD. He’s not a stud like Subban, Karlsson, or anyone of that ilk, but he’s still a guy that changes the face of the Rangers’ blue line. He’s no savior, which is also important to note. Ranger fans suffer from Brian Leetch syndrome and basically chase away anyone who isn’t him (Poti, Yandle, Shattenkirk, etc). Let is be known that Trouba is not Leetch. Trouba is Trouba. He’s a significant upgrade on Pionk and will help stabilize the blue line. But he’s not the kind of guy who can carry a blue line either. The first is finding the right partner for him to complement his skills and cover for his weaknesses. With Trouba and the right partner, the Rangers may finally have that top legitimate top pairing they have been searching for.