There is no player more polarizing on the Rangers right now than Kevin Shattenkirk. There are only two sides to the spectrum: Love him, or hate him. There appears to be no middle ground with Shattenkirk. A lot of that has to do with how the defense position is viewed, and how that view is evolving. Regardless, Shattenkirk is a Ranger and he is still one of the better defensemen on the team.

When the Blueshirts signed him to his four year, $6.6 million deal, he was expected to be the 1RD to keep the Rangers relevant. Now the Rangers being awful is far from his fault, but it is also fair to say that Shattenkirk hasn’t exactly met expectations. Shattenkirk put up a full season career worst 2-26-28. That was in 73 games.

Despite his career worst numbers, Shattenkirk was still the second-leading scorer on the Rangers’ blue line to Tony DeAngelo. He was the only defenseman to post an xGF% above 50% at 50.75, and his GF% of 45.24% indicates that his results were actually under the expected output based on his stats, meaning there was some bad luck involved. The 6.61 on-ice SH% of the entire team while Shattenkirk was on the ice also lends credence to this argument.

With Shatty, you expect the offensive numbers to pick up the defensive numbers. The funny thing is that is not the case at all. Shatty was second on the team in xGF/60 at 2.35, which is expected. His xGA/60 of 2.28 though is actually second best on the team to Fredrik Claesson. So Shattenkirk’s “defensive woes” that everyone talks about are fairly overblown (although there is a case for a few strong games propping up a lot of weak ones).

We all know what Shattenkirk offers offensively, so his impact there shouldn’t surprise anyone. But let’s take a deeper dive into shot locations against. 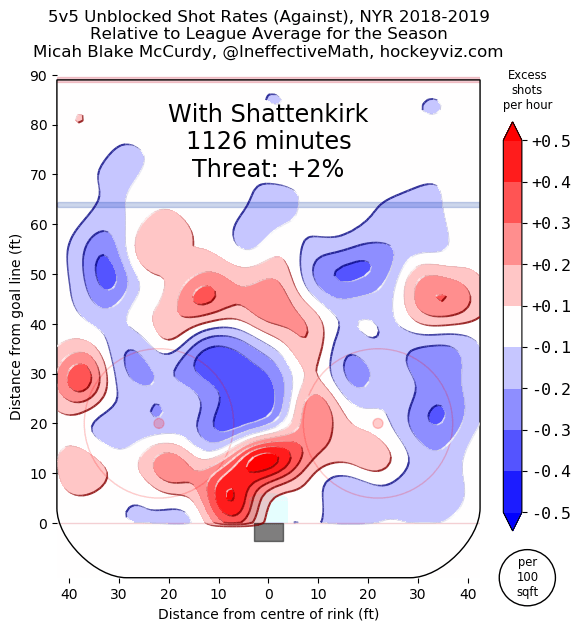 Here we see how the opposition fairs when Shattenkirk is on the ice. The right side, front of the net area has some good amount of red, but it is largely shifted to the left side. Now to be fair, the argument against Shattenkirk defensively is that he’s largely out of position, leaving the LD to cover for him. This chart doesn’t necessarily prove or disprove that argument. We can only look at shot locations when he’s on and off the ice. 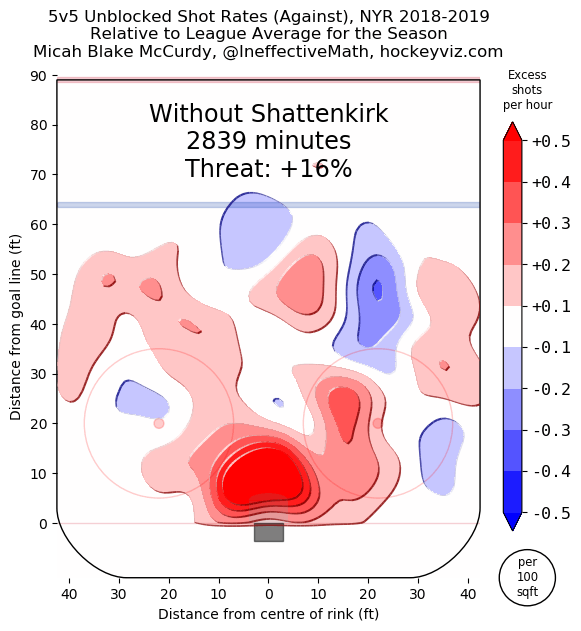 Here’s the impact when Shatty is off the ice. Two things to take note of:

This leads me to believe that Shattenkirk’s impact on the defensive side of the puck is largely understated and under appreciated. It’s not a perfect analysis, but we’ve looked at quantity of shots against, quality of shots against, and shot locations. Sometimes, you just need to take a step back from your own assumptions and realize that Shattenkirk may actually be a good defenseman, as well as an offensive driver. They aren’t mutually exclusive concepts.