One of the starkest anomalies of the 2018-19 Rangers season was a 12-game stretch that lasted from early January to early February. From games 42 through 53, the Rangers went 6-5-1 with five regulation wins and one overtime loss. They were a 50% Corsi (shot attempts) team at 5v5, which is average, while being nearly a 53% Expected Goals (scoring chances) team per Corsica – which, season-long, is a top-10 figure for an NHL team. How did this happen? In short, the Rangers did start creating more offense, but the massive turnaround was the limiting of shots and chances against. 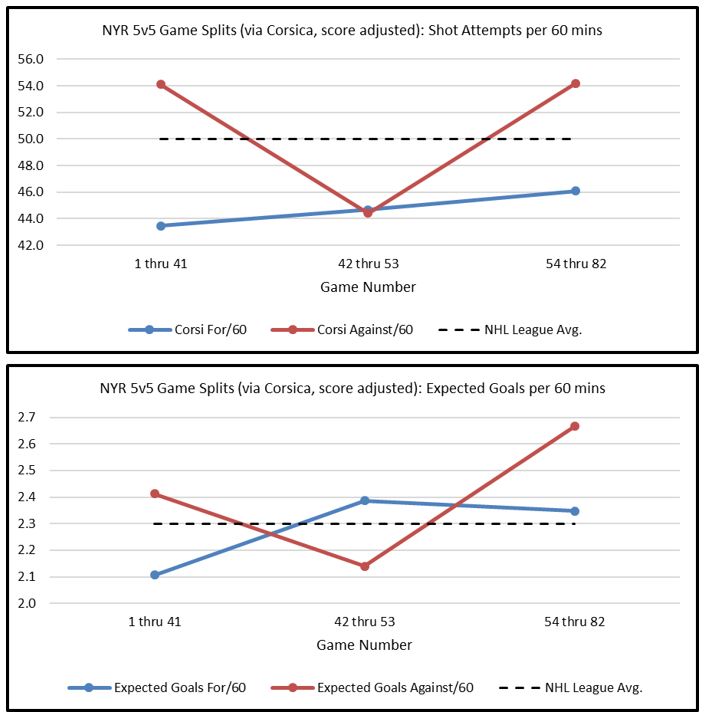 Now of course a few caveats apply: the competition the Rangers faced was mixed and it’s certainly possible for a team to just play better or worse for as small of a stretch of the season I am referencing. What is most curious to those who follow the Rangers daily, however, is what personnel was being used during this timeframe. Of note, Neal Pionk was out injured for five games while Brett Howden (both to be looked at more later) missed four. When they returned, they were eased back in TOI-wise, with Pionk playing 3rd pair and Howden seeing 2-3 less minutes per game (along with the 4th line at the time, which included Cody McLeod). Furthermore, Tony DeAngelo replaced Pionk when he was injured, which sparked his solid second half performance. Marc Staal was paired with DeAngelo and the two were playing 2nd and 3rd pair minutes. Finally, Kevin Hayes also returned to injury, and this coincided with Quinn and Oliver giving the top-six more TOI per game than at any other point of the season.

To summarize: the role of injuries guided Quinn & co. to a lineup that saw some of the worst defensive players of last season (Pionk, Howden, McLeod, Staal) either out of the lineup or playing less, and their TOI was replaced by average or better players (Hayes, the top six, Smith, Nieves). To me, this all tracks with the phrase “addition by subtraction.” While the infusion of top-tier youth and potential UFA signings will be headline news this summer, the Rangers also have an opportunity for improvement by either removing or limiting the impact of players that visibly struggled last season.

In late April, Evolving Hockey updated their RAPM data to include the 2018-19 season (all data below is from the site). What the hell is RAPM? Check out the link, but the key paragraph is here:

Taken originally from the NBA/basketball data, RAPM is lauded by public analytic communities because while it isn’t a one-number/catch-all metric, RAPM consolidates key aspects of each sport that provides a good starting guideline to compare players. In the end, RAPM quickly identified a few Ranger players where the “addition by subtraction” mantra could apply. 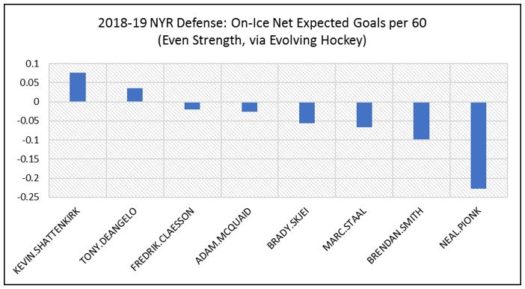 To begin, I chose to sort the Defense and Offense by their Expected Goals (xG) per 60 impact and then also consider Corsi (shot attempts) in secondary analysis (xG and Corsi have a correlation of about 80% since 2007). Given that we’re focusing on “addition by subtraction,” this would mean Neal Pionk, Brendan Smith, and Marc Staal should be on the chopping block first. Let’s look at how each player has fared in the last four years of RAPM data, first with Neal Pionk. 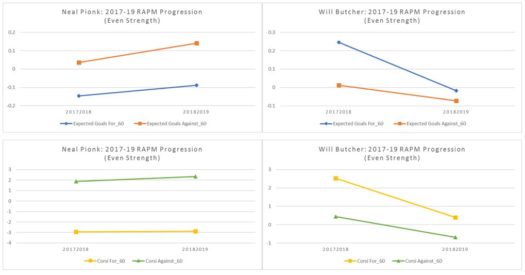 Yes, Neal Pionk has only played 101 NHL games in a higher-TOI role while playing against higher-TOI forward competition (who tend to be better, on average). He’s also done so on two below-average NYR teams while playing a lot of Marc Staal. With all that said, though, he ranks dead last in Corsi percentage at 5v5 for Defenders who played 100 games in their first two seasons in the last five years. It seems wild to have to type this out, but Pionk should not be confused with Charlie McAvoy, John Klingberg, or Will Butcher. I’m not saying a lot of people are, but the major risk here is that Rangers management (and some fans) seem to think he can become that. The odds of that at this time are, simply put, low.

Back to the data though, where I used Butcher as a comparison, as Butcher came out of college like Pionk, is a similar age, and has played in a similarly bad team at higher TOI. To understand the chart: 0 is NHL average, meaning the further away a players rating is from zero is, the more impact they have while on the ice in the category. As we can see with Pionk, he is giving up shots and chances at a well-above average rate, while generating shots and chances at a below-average rate. This is the opposite of Butcher, who slowed down this past year in terms of shots and chances for, however he still gave up less than he helped generate.

To cut to the chase: Pionk has not showed he can be an effective high-TOI Defenseman in the NHL yet. He should be considered a third-pair option at best next fall, if not starting in Hartford (especially with the Adam Fox developments as of late).

In a briefer review, here’s Brendan Smith and Marc Staal: 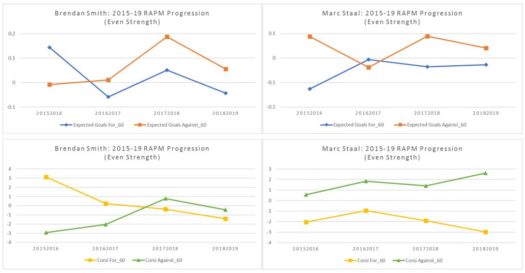 Both defenders are under water, with Smith doing better in the Corsi (shot) department than Staal. Both defenders are also clearly declining, which is not news, however how or if this will be handled by the Rangers FO remains to be seen. Personally, because of his better skating ability and results at limiting more shots against, I would lean to keep Smith around as the bottom-pair D. Yes, Staal has his NMC, however given that the theme here is “addition by subtraction,” all creative solutions to removing him from the roster should be considered.

Let’s move to the NYR Offense. 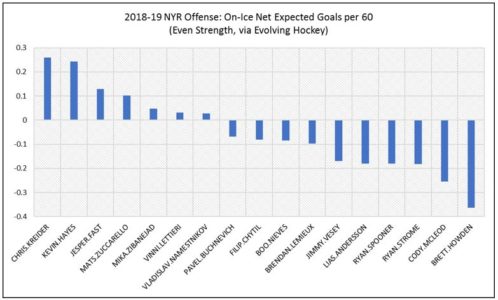 To start with good news here: McLeod and Spooner are already gone. Howden, in year one, struggled in his own end after receiving likely more TOI than he deserved due to a hot scoring start. That said, he did generate offense at an average NHL pace, so given that there is little chance he starts in Hartford to work on his defensive responsibilities, I am a fan of moving him to the wing in the bottom six as Dave pointed out in his report card. Lias Andersson also struggled in year one, and despite being yo-yo’ed around the lineup, he did not do as starkly bad as Howden. He’ll also be around in the fall in a bottom six role but should likely stick at center. This brings us to our first higher-TOI player: Ryan Strome. 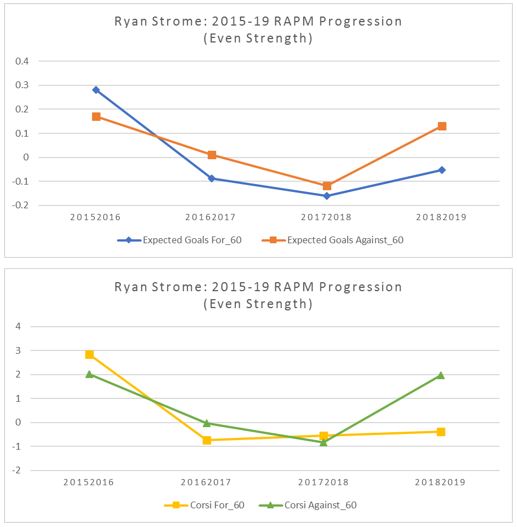 Strome generated about the same amount of offense as he did the last two seasons, but instead of scoring 8-13 goals has he’s done previously, he scored 18 (all-situations) while shooting 22.5% with the Rangers (very low odds to repeat). He did not provide defensive value to make up for this, so this makes him a prime candidate to be replaced by incoming youth and/or a buy-low UFA. Maybe in a perfect world, Gorton could recoup a 2nd or 3rd or make him a part of a deal to aid the defense. Either way, committing to him in his age 26 season would likely not be wise.

The final noticeably negative name to discuss would be Jimmy Vesey. 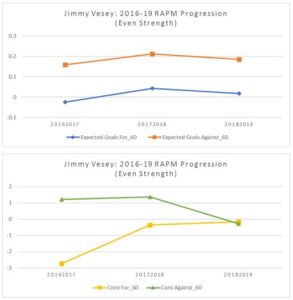 Vesey is very much a winger who clearly has shooting talent but needs good linemates to get him the puck and help drive play forward. Put another way: he’s a passenger on most lines. He generates an average amount of offense while giving up an above-average amount of chances. To his credit, he did shore up the Corsi (shots) against this season. The reason I mention him last is because true shooting talent is hard to find and keep around in today’s NHL. While it would be nice to have a more complete player (like Fast or Namestnikov) with the same shooting ability, that will be difficult to find. Unless NYR gets an offer that clearly overvalues him, Vesey can still bring more value than Strome, for example.

In the end, without assuming which additions or re-signings that will be made, here’s what my NYR lineup would look like come the fall of 2019 with just the subtractions mentioned:

While who will fill in the X’s will be heavily debated, I do believe that the simple goal of removing or limiting the impact of some of the worst performers last year will lead the Rangers to incremental success.