When the Rangers acquired Brendan Lemieux in the Kevin Hayes trade, there was a very vocal group expressing displeasure in targeting Lemieux instead of a player with more perceived skill to their game. Lemieux is certainly skilled, but also has a grit and pest aspect to his game. The easy comparison is to that of Sean Avery. A pest who can also, you know, play the damn game.

Lemieux only played 19 games with the Rangers, putting up a line of 3-3-6 in a middle-six role. With Winnipeg, he put up 9-2-11 in 44 games while bouncing between the fourth line and a healthy scratch. This was more or less his rookie season – he played 9 games last year – and the former 2nd round pick has shown that he can at the very least be a contributing bottom-six forward.

It’s tough to really gauge Lemieux on his numbers, since it was limited with the Rangers. He put up a xGF% of 45.40 in his 226 minutes of even strength time, which was 9th on the team in the non-Zuccarello/Hayes division. The interesting thing here is that Lemieux was more of a contributor offensively (2.38 xGF/60 – 6th) than defensively (2.86 xGA/60 – 9th). For comparison’s sake, Lemieux with Winnipeg had a 41.72% xGF%, significantly worse than his time with New York. Most of that is in his lack of offensive contribution (2.13 xGF/60). With better linemates and more minutes, Lemieux contributed better offensively. That is certainly promising. 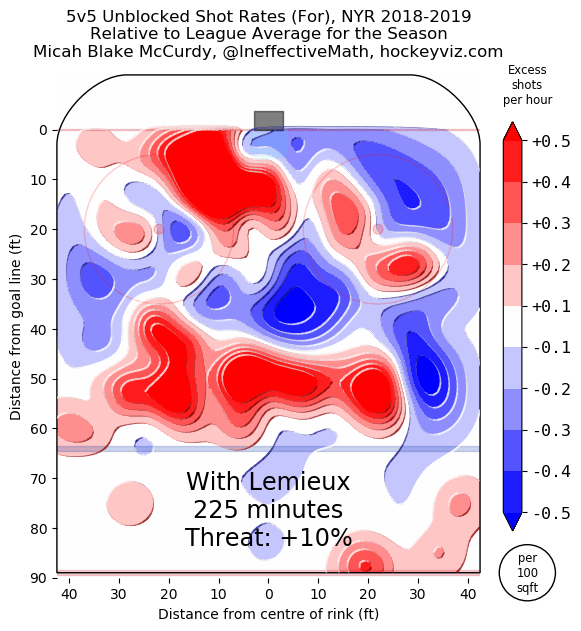 Again, we are working with a 19 game sample with the Rangers, so everything with the graphs should be taken with a grain of salt. With Lemeiux on the ice, the Rangers generated a positive threat level, which is good. As a LW, the sea of red on the left side by the net mouth shows that the Rangers got more shots than league average from Lemieux’s position while he was on the ice. This is all good stuff. 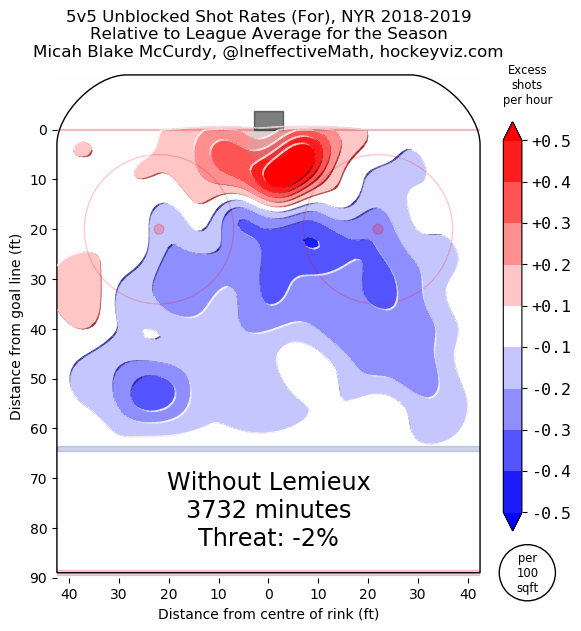 Compared to without Lemieux on the ice, and the Rangers are pretty much below league average and don’t do much from the left side. We can use these two charts to infer that Lemieux excels at getting to the net, which pretty much fits what we say in his short stay so far. However when it comes to his defensive play, there’s room for improvement. 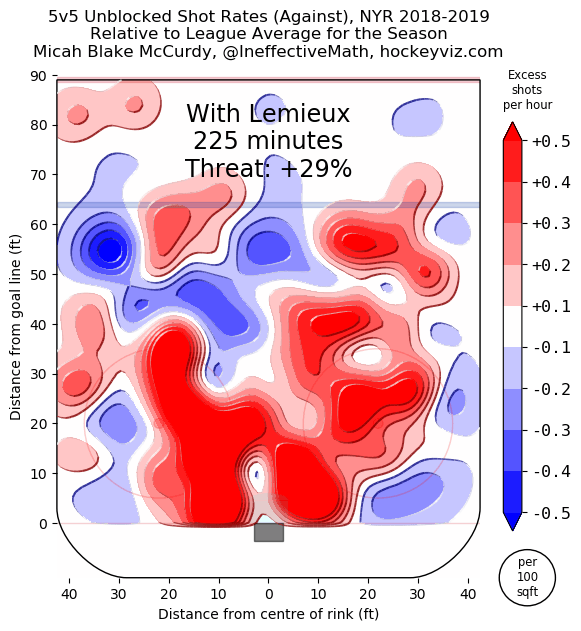 That’s a lot of red, almost as much as Brett Howden. Again though, just a 19 game sample. It’s not like the Rangers were stellar defensively anyway. Yes, a lot of the forwards’ defensive issues can be attributed to the overall team level of stink, but it’s also a five-man game. Lemieux wasn’t exactly a defensive stalwart with Winnipeg, so there’s work to be done here.

Overall it’s really tough to judge Lemieux on 19 games so far in his rookie season. He certainly has promise, and his style of play is something the Rangers need. That said, they need him to be a net positive as well. There’s growth opportunity here.