Continuing with our report cards, we move on to Jimmy Vesey. The middle-six forward is a bit of a utility man for the Rangers, playing as high as the second line and as low as the fourth line. Vesey is perceived as a blue collar defensive guy who can chip in 15 goals regularly. He is certainly deployed that way.

Vesey tied or set career highs in all offensive categories this year with 17 goals (tied), 18 assists (new career high), and 35 points (new high). The 25 year old winger has another year left on his deal at $2.275 million, and is a popular trade bait candidate in an effort to upgrade the blue line.

This year, Vesey’s struggles away from the puck continued. He was closer to the bottom of the roster than the top in xGF% (10th – 45.88, or 8th if you remove Zuccarello/Hayes). Vesey actually drives offense better than most on the team, he was 3rd in xGF/60 at 2.51, and 2nd if you remove Zuccarello/Hayes. That’s not only very good, but very surprising. He is going against the grain here in terms of perceived value on the ice.

As for his defensive play, where he supposedly has value, it just isn’t there. Vesey is 14th on the team (12th without Hayes/Zucc) in xGA/60 at a terrible 2.96. That means for every 60 minutes, Vesey is expected to give up 3 goals against while on the ice. He wasn’t exactly playing tough competition anyway, as that was reserved for the KZB line, who constantly drew the tougher competition. Suffice it to say, Vesey just isn’t good away from the puck.

Since we are openly pointing out that Vesey is bad away from the puck, let’s focus on the positives, and that is Vesey is good at crashing the net, where the majority of his shots come from. 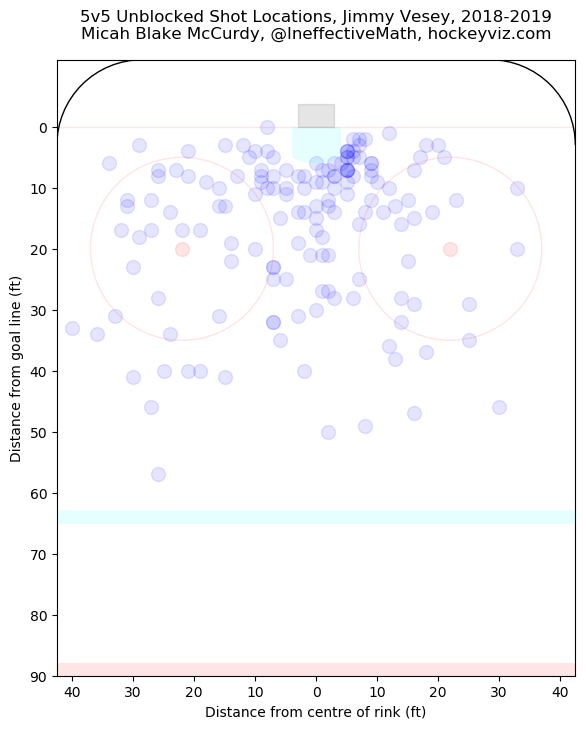 This is something you want to see from Vesey, a guy who may not be the most skilled, but will do the dirty work in front of the net. He’s no Chris Kreider, but he’s at least willing to go there. We also see an improvement in overall shots taken with Vesey on the ice:

Compared to him off the ice: 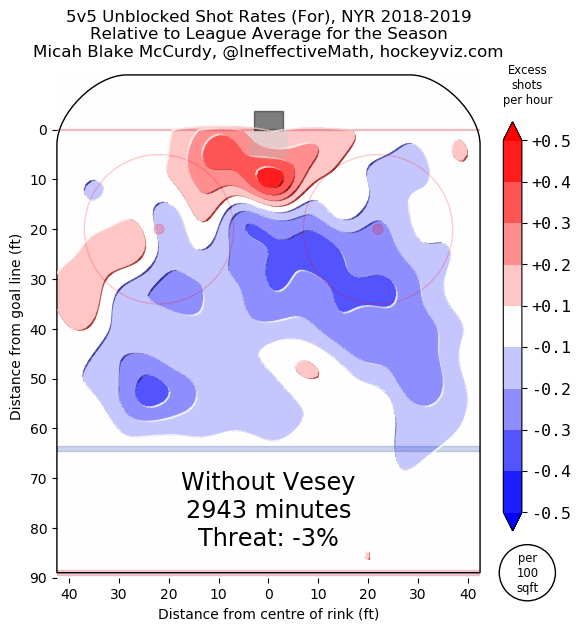 He doesn’t move the needle much, but the threat level is a net change of 6%, so that’s good. The Blueshirts do get more chances in front, specifically on the right side of the net mouth, which is where Vesey gets the majority of his shots. He doesn’t do much once he gets outside 10 feet of the net, though.

We do need to talk about his defensive issues, though, and I’m a big fan of shot heatmaps. Here’s how the Rangers are when Vesey is off the ice: 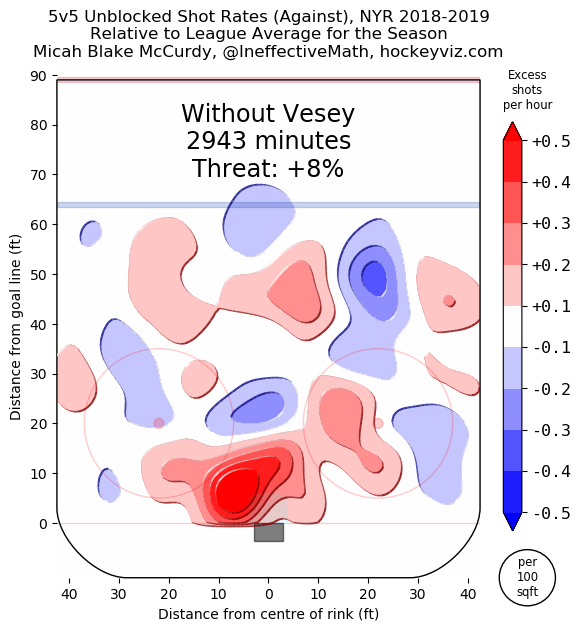 You can see the usual issues, but take note of the left circle, which is where Vesey would play in David Quinn’s 2-1-2 zone scheme in the defensive zone. And now when he’s on the ice: 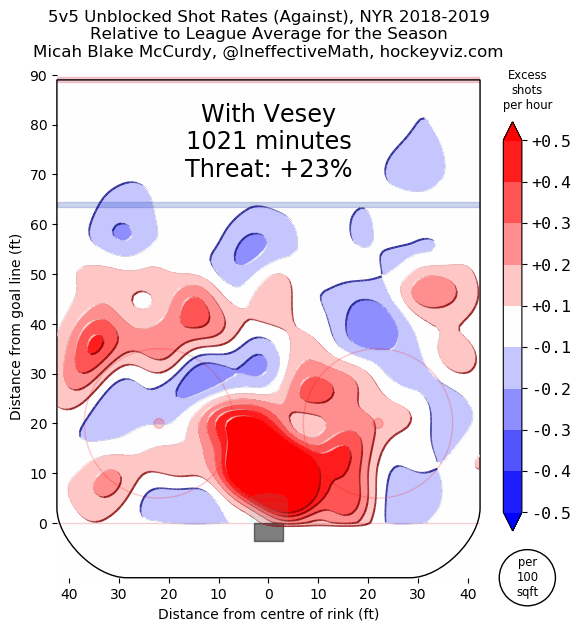 There’s a huge difference here. Not just in the threat level, which is a 15% jump with him on the ice, but there is significantly more amount of red in that left circle area. The concern is less about the shots that are coming between the boards and the dot, but there is still a larger than league average difference as we get closer to the high slot, which is bad. Vesey just doesn’t defend that well.

Based on expectations, Vesey exceeded them offensively. It’s tough to argue that a 17-18-35 point guy while playing mostly bottom-six minutes is a bad investment. However Vesey just isn’t good defensively. There are many arguments why the Rangers should look to trade him, but this post is about evaluating his play this year. He exceeded expectations offensively, but is just not good defensively. He is what he is at this point.