Exploring Jacob Trouba to the Rangers again, and the non-Chris Kreider method of making a trade work 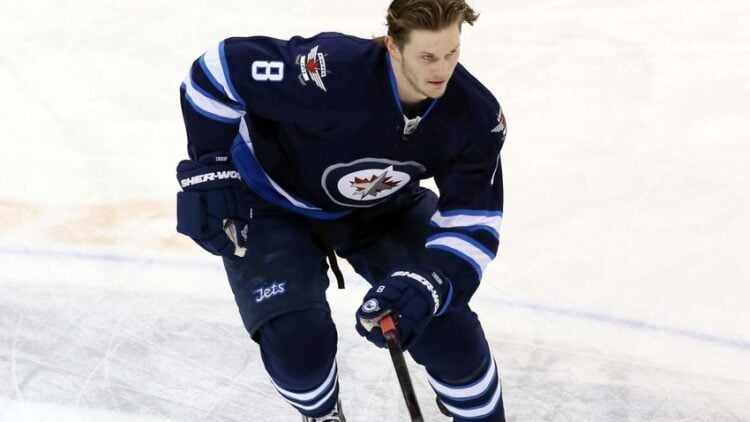 Stop me if you’ve heard this before, but the Rangers need blue line help. After a week of talking non-stop about the second overall pick and Kaapo Kakko, it’s time to shift gears and chat about the other holes the Rangers need to fix this summer if they truly want to accelerate this rebuild. The biggest issue is on the blue line and finding a potential stud defenseman.

Enough Erik Karlsson talk, since he’s the only big name available on the trade market that moves the needle. If the Rangers want to make a splash on defense, and they choose Artemi Panarin over Karlsson, then they will need to do so via trade.

Jacob Trouba has been the guy that has been talked about for some time. I honestly have no idea if Winnipeg is actively looking to trade him, but the rumors are that Trouba wants out. At 25 years old and coming off his one year, $5.5 million deal, his next contract could be pretty big. With Dustin Byfuglien taking that 1RD spot when healthy, Trouba isn’t seeing top minutes. Again though, that’s when Byfuglien is healthy. A smart Winnipeg team looks to trade him, and not Trouba, who put up 8-42-50 this year. If he is traded, the cost to acquire him would be high, even if there’s a chance he’s only a one-year rental before hitting unrestricted free agency.

It’s been talked about that Chris Kreider could be the bait there, especially with Kakko and potentially Panarin in the fold. It makes logical sense in a vacuum, although I have no idea if Kreider for Trouba is something that makes sense in terms of actual value (You know nothing, Jon Snow). They both could be, for all intents and purposes, one-year rentals before hitting unrestricted free agency. Kreider’s $4.625 million would be less than Trouba’s expected greater than $6 million deal, which helps Winnipeg a great deal (more on that below). It gives the Jets another top-six forward to help them stay relevant in the West, and it gives the Rangers their much needed 1RD without impacting their available cap room that much.

The wild card is Winnipeg’s cap crunch, needing to re-sign both Patrik Laine and Kyle Connor –and fill out their roster– with about $26 million in cap space. Laine and Connor likely take up more than half of that space. The Blueshirts, with oodles of cap space, can use it to take on Mathieu Perrault and his $4.125 million with Trouba in exchange for something lesser than Kreider. After all, Winnipeg needs to fill out that roster. Does something like Jimmy Vesey (or Ryan Strome), Neal Pionk, and their 1st rounder back move the needle for Trouba and Perrault? Likely not (It seems light to me), but it might get the conversation started (I’ve realized I know nothing about trade value). In this scenario, the Jets get some much needed depth and some futures, but definitely take a step back in top-end talent on the blue line.

Cap space is a fickle thing, especially when you have over $4 million tied up in what is basically a 4C going forward. But it’s not like Perrault is useless. Overpaid definitely, but that doesn’t really matter for the Blueshirts at the moment. Vesey produces more points at even strength, but Perrault still put up 15 goals, so it’s closer than you think. Perrault’s assists are mostly secondary, which can lead to more fluctuation and perhaps fewer assists next season, but he more than makes up for it in his relative xGF% (5.19, compared to -1.83 for Vesey). The Blueshirts would be sacrificing a little more offense for better play away from the puck, an area which Vesey struggles mightily. With Kappo and the long rumored Panarin in tow, it’s unlikely the offense would be missed.

My assumption, though, is that the Rangers would need to add to this. They’d need to add a potential middle six prospect. Brett Howden instantly comes to mind. After his hot start he looked out of place and not NHL ready, but the talent is certainly still there. Howden is also on the outside looking in when it comes to future centers, with Mika Zibanejad, Filip Chytil, and Lias Andersson possibly taking the 1-2-3 roles. With Perrault coming in this hypothetical, all of a sudden there’s a crowding issue. Does Vesey, Howden, Pionk, and Winnipeg’s 1st back for Trouba/Perrault move the needle? Is it an overpayment? Is it a classic case of quantity over quality? It’s tough to gauge, but there’s certainly a framework that might make sense for both teams. However for the Rangers this also takes for granted a massive assumption that Panarin is coming to New York.

Even with Trouba in the fold in this hypothetical, the Rangers would still have a lot of questions about the blue line. He’s slide right into that top pairing, likely with Brady Skjei. But that leaves the 2LD spot to Marc Staal, which is less than ideal even if he did look somewhat decent with Tony DeAngelo. Libor Hajek might be the 3LD if that stint wasn’t a fluke, paired with Kevin Shattenkirk or Brendan Smith. It’s definitely an upgrade, and teams have won with worse, but it’s not ideal. If the Blueshirts are able to get Trouba without sacrificing Kreider –or any of the other major prospects that don’t really need to be named anymore– then it’s a big win and big step in the right direction of acceleration.